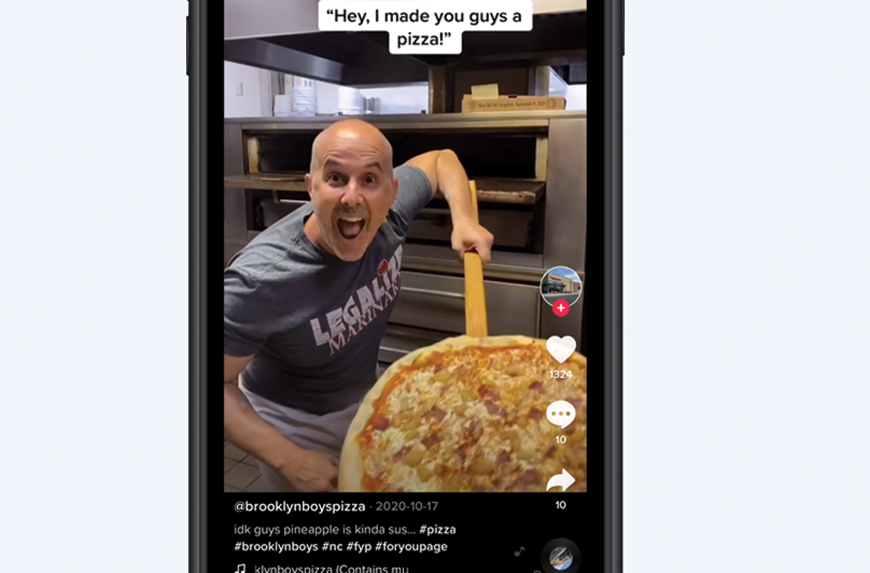 The Pizzeria’s Abridged Guide to Social Media in 2021

The Pizzeria’s Abridged Guide to Social Media in 2021

When discussing the growth of Triple Jays Pizzeria in Atlanta, Jay Terrence doesn’t get far without mentioning the role of social media.

Given Triple Jays’ 2015 origins as a food truck, social media served a tool to communicate with customers eager for a taste of Terrence’s award-winning, New York City-styled pies. Facebook and Instagram, where the pizzeria currently boasts some 10,000 followers, propelled Triple Jays’ notoriety and empowered Terrence to open a brick-and-mortar restaurant in February 2020.

“Social media was the most economical way for us to get the word out to thousands of people,” Terrence says.

In early 2020, Triple Jays doubled down on social media when it added TikTok to its social media arsenal. In one calendar year, Triple Jays posted hundreds of snappy videos providing a behind-the-scenes look at pizza-making, store personalities and notable guests such as basketball legend Shaquille O’Neal en route to collecting more than 22,000 followers.

“I’m always trying to catch the next thing so I can ride with that,” Terrence says.

While the contemporary restaurant marketing playbook touts social media’s benefits, the pandemic elevated its stature given consumers’ soaring reliance on digital devices amid the quarantine lifestyle.

“COVID supercharged the importance of social media and was a lifeline to all restaurants as a meaningful way to reach customers,” says Marc Liu, co-founder of New York City-based Gourmet Marketing.

And it’s no fleeting arrangement given ever-rising technological adoption.

But on which social networks should restaurants be active, especially given the practical challenges of managing accounts with regular postings, evolving functionalities and shifting consumer whims?

With 2.7 billion and 1 billion monthly active users, respectively, Facebook and Instagram dominate social traffic, yet both continue to evolve and offer new ways for restaurants to engage audiences and distribute unique content.

Facebook, for instance, continues to take larger steps into the e-commerce arena. Users can now purchase products from Facebook as well as Instagram, its sister network, without ever having to leave either platform, thereby cultivating the faster, more seamless checkout experience today’s consumers crave.

“For restaurants looking to diversify revenue streams through merch and other e-comm products, Facebook’s tools could play a significant role in helping to launch, sustain or grow these businesses,” Goff says.

But beware: on both ubiquitous platforms, investing in paid options – which can be economical and evaluated, it’s worth noting – are necessary to maximize reach.

“You can’t get around paid on Facebook and Instagram because of the algorithms, so familiarize yourself with paid options on both,” Liu suggests. “To not do this is to miss out.”

Over the last two years, TikTok has been the belle of the social media ball. In February 2019, the video-sharing network claimed nearly 27 million monthly active users in the U.S. Today, it boasts well over 100 million, half of whom are daily active users, according to company data.

“Without question,” Goff says, restaurant marketers should consider developing a paid and unpaid presence on TikTok given the exposure the platform delivers, the variety of creative paths it offers and its fresh appeal.

“The TikTok opportunity exists today, but it might not exist tomorrow as more brands jump on board,” Goff says. “Restaurants should look for ways to immediately start participating on TikTok, particularly through the use of low-cost TikTok influencers.”

While Snapchat, LinkedIn and YouTube are all established platforms, each provides its own unique, though often overlooked appeal.

With TikTok’s surge, many wrote off one-time Gen Z darling Snapchat. The 10-year-old messaging app, in which pictures and messages vanish after a short time, has wooed back users with some strategic development and new promotions, Goff says, including a daily $1 million giveaway for the best user content. Its resurgence is worth monitoring.

While LinkedIn is mostly used for professional networking, the platform now rewards high-engagement content with equally high organic reach in its news feed. With that, Goff says restaurants might “seek out ways to create engaging or shareable content on the platform with the intention of reaching a large, tuned-in user base at little to no cost.”

And don’t sleep on video powerhouse YouTube, especially for longer-form video. Restaurants might use the platform to share instructional tips for home cooks or detail the development of a new menu offering.

One important note: as so many restaurants leverage multiple social media channels, Liu suggests using a scheduling tool such as Hootsuite or Buffer to streamline posting and spur a more calculated plan.

“Using a scheduling tool will lead to a more thoughtful approach and also help improve the efficiency of your social media efforts,” he says.

In the rush to capture social media’s benefits, pizzerias should not jump onto a new digital bandwagon without first considering the practical and strategic aspects of adding another social channel to their marketing mix. So, before launching a new social media platform, consider these central questions:

What social networks are my core customers using? Investigate where customers spend their time online for inspiration, news, entertainment and the like. That’s where you want to be.

Am I committed to doing this well? Social marketing is a marathon, not a sprint. Absent an investment of time and energy into developing consistent and relevant content, a new social media channel will likely fall flat and struggle to deliver a reasonable ROI.

Who will oversee content? Someone competent must manage a new social media channel and that individual should be invested in doing it well.