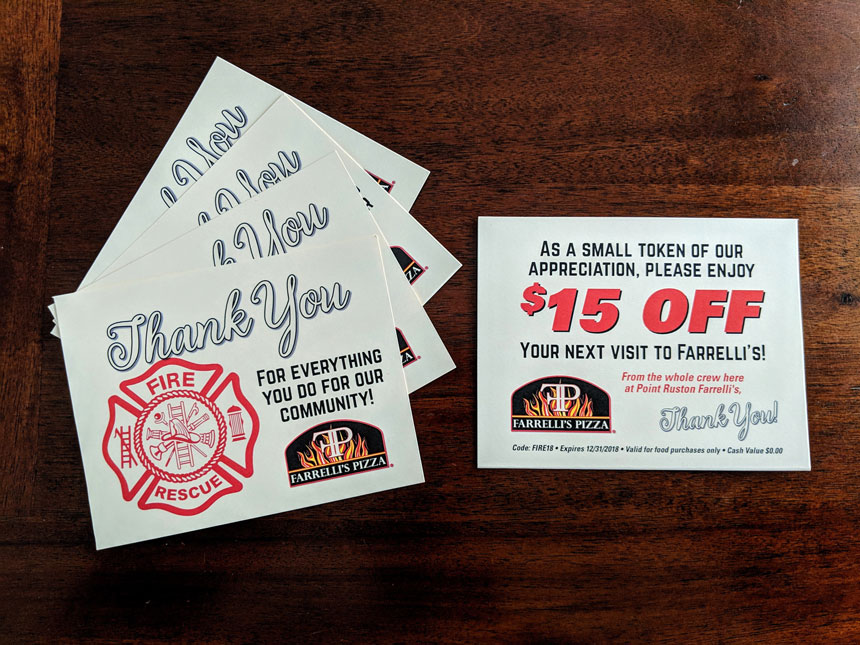 Build sales by extending thanks

Build sales by extending thanks

I had a vision of appreciation. This is one of my core values. I am the current CEO and Co-founder of our 24-year-old, nine-store pizza chain, called Farrelli’s. I founded it with my parents, John and Margaret Farrell.

Papa & Mama Farrelli always taught me to have a stack of thank you cards, so this vision of appreciation I mentioned was just a natural extension! My vision was to appreciate the people around our neighborhoods who serve the community in different ways — first up was the firefighters. My husband is a firefighter and I wanted to do something for Firefighters Appreciation Day in 2018.

What do firefighters love? Pizza! We planned to deliver pizza to his station, but that didn’t seem like enough… how about pizza and a $15 appreciation card? Boots on the ground, let’s do it!

However, we could not just take care of his department, we needed to take care of all the departments in all the neighborhoods that had taken care of us over their many years of service. Mission: bring pizza and $15 appreciation cards from all locations to all fire department districts in each Farrelli’s neighborhood. Sounds simple … but, for example, in one neighborhood there were around seven stations with 150 firefighters. And we have nine neighborhoods to nourish. My point here is to not underestimate the reach you may have and be prepared to divide and conquer.

In terms of the design of the card itself, it was important to me that we presented them with an appreciation card that functioned as a gift card to Farrelli’s that could be redeemed in our stores as a sign of appreciation and thanks for the work that they do. I did not want it to look like a coupon, nor did I want to force them to make a purchase. After all, this was to be a genuine gesture of gratitude.

I asked our leaders, also known as neighborhood ambassadors, to personally deliver the pizza and appreciation cards. The impact it had was significant.

Autumn Nessibou led the charge in one of our stores and had this to say: “We delivered enough pizzas to the Sumner location that several other firehouses were able to stop by and take pizza back with them. One firefighter came to the door and thanked me for the kind gesture from our restaurant. Later that afternoon, several firefighters from around the community posted thanks and pictures of them enjoying Farrelli’s for lunch on our Facebook page. It was such a win-win situation in that they felt our genuine appreciation for their service, but I also was moved by their level of appreciation for our campaign.”

Another leader, Brittany Knieriem, commented: “I had such a positive experience from the firefighters. From the moment I called to get a head count of their building, telephone operators included, they were all so friendly and appreciative. When I arrived with their lunch that day, everyone started clapping and shaking our hands as if we were their heroes that day. Their selflessness is remarkable and it felt amazing to give them a small token of our appreciation. I have seen numerous amounts of appreciation cards coming back in and I’m loving this campaign and feeling like I can contribute to my community!”

After the Firefighters, I felt this campaign had some real legs and wanted to keep the appreciation train going. I met with our Director of Marketing, Clayton Krueger, to help identify the next segments to appreciate. We decided next up would be the local grocers in our areas. How many times have you stood in line at a grocery store and watched as a clerk demonstrates remarkable patience or kindness with an unreasonable customer (I’m sure none of us can relate to this)? Boom! Second mission identified. At this point I’m thinking I want to target a different segment every month.

Once again, the mission was even bigger than I had imagined. I was picturing 15 to 20 clerks in each store. Well, try around 175-250 employees per store! At first I was a little overwhelmed with the quantity, then I reminded myself of the purpose — to appreciate those who can fall under the gratitude radar while building sales with an unconventional use of marketing dollars. Also, wouldn’t it be great if you had the local grocery clerk telling a cool story about your pizza store? I wanted our pizza store rippling with great stories and intent in our neighborhoods. So, again, we executed on our mission to appreciate the grocery clerks as well as the baggers, butchers, deli workers and countless other roles which extended our appreciation to the entire staff of each local grocery store.

Next up? Teachers! Teachers really need some appreciation, and our teachers in Washington had a tough start to the year. Many had to strike. The teachers were a lofty goal and one to which you could dedicate many months. When I first tasked the leaders to do a head count of how many appreciation cards we should make, the answer actually shocked me. In one area it was over 1,000 teachers in a district.  At this point I needed to reign it in a bit so as not to flood the stores with gift cards all at once. So we broke it down to elementary, middle and high schools, one a month, and it became much more manageable.

Patrick Lewis is one of our leaders and has strong ties to his community. He led the charge for the teacher campaign and had this to say: “As I put the appreciation cards in their school mailboxes in the main school office they were coming and getting messages. All of them were very appreciative and kept saying thanks was enough, but a gift card made it better. Before I was gone for the day at least 10 more teachers came in because they heard about what we were doing. Over a week later I was flagged down and again thanked. Everyone was just surprised that we would thank them and be so involved in the community.”

Leader Emilie Becker added: “It has been fun to see the same smiling faces we saw during the strike for the free breadsticks promotion coming back in to use their thank you certificates. We have created a bond.”

Most recently, we have appreciated baristas. Tyler Winters, a leader for our company, states: “Today I went to the first of the three independent coffee stands that surround us and left 14 certificates for the baristas and owners. I have visited this location several times in the past. However, today when I told the baristas about how great we think they are and why we are doing this neighborhood outreach, they were so appreciative I received a round of handshakes and high fives. This program is helping our location dig deeper roots with the other businesses that are around us. This is what separates us from the competition. This, to me, is Farrelli’s teaming up with other businesses to continuously let the community know we are now, and always will be, great — and they should want to be a part of what we stand for.”

Tyler’s statement sums up the intent and the purpose for the campaign.  Give your community and your crew a reason to proudly support your brand!

This program is still very much a work in progress for Farrelli’s. Rob Rasmussen, who designs and is responsible for our materials, commented: “I think it gives our crew a really good feeling that they have a tool to reach out into their communities, and an opportunity to interact with some of the folks that not only come into their stores, but also that they see out and about in the community outside of our four walls.”

At Farrelli’s we will continue our mission, which is: To use our business systems to create vibrant working families that provide nourishment to our neighborhoods. Have fun with your appreciation campaign and enjoy watching your sales grow!