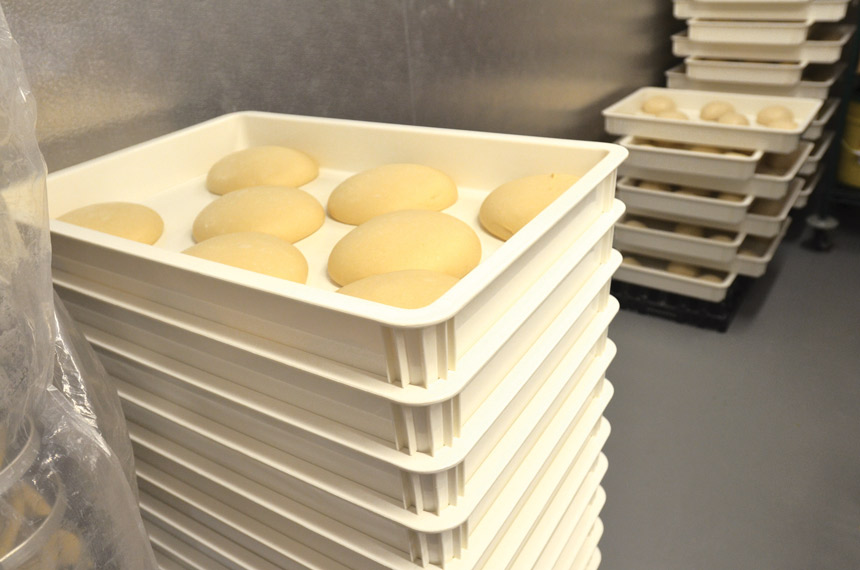 Help! We are having a problem with our dough growing in the cooler.

A: There are a number of things that can result in the dough “blowing” in the cooler. The first cause could be excessive amounts of yeast in the dough. Most pizza doughs perform best when the yeast level is at or near 1 percent compressed yeast –– this equates to .5 percent active dry yeast, or 0.375 percent instant active dry yeast.

You might also check your dough’s finished temperature. If you are using a refrigerated dough management procedure –– which allows you to use the dough over a three day period of time from the cooler –– a good target, finished dough temperature is in the 80 F to 85 F range if using a walk-in cooler, or 70 F to 75 F if you’re using a reach-in cooler. If your finished dough temperature is higher than this, it becomes difficult to effectively cool the dough to a point where the rate of fermentation can be sufficiently lowered to allow for holding the dough for any extended period of time.

In some cases, such as stores with only a reach-in cooler, this won’t be possible, so the correct course of action to get colder water is to add ice to your water. When adding ice, be sure to replace the water on a pound for pound basis for ice. Do

n’t use a volumetric measure for the ice as it has a significantly different density than water. I recommend that you begin by replacing one pound of water with one pound of ice. Be sure to use flaked ice rather than cube ice as the cube ice, which will not melt sufficiently fast to work in this application. Keep increasing/adjusting the amount of ice added until the finished dough temperature falls within the desired temperature range.

Another thing that can cause the dough to blow is failure to take the dough directly to the cooler after scaling, balling and boxing. For some, it is a common practice to allow the dough to set out at room temperature for a period of time before we begin scaling and balling it. This practice can lead to the dough fermenting, and changing in density (becoming less dense) before the dough actually goes to the cooler. The less dense dough is significantly more difficult to cool uniformly. It is a better insulator and, as such, it may never cool to a point where it will be sufficiently stable in the cooler to allow it to be held for any period of time without blowing. Normally, when the dough blows under these circumstances, the reaction is to reduce the yeast level to a point where the dough doesn’t blow, but this now introduces a whole new problem –– in many cases, the dough now has a yeast level so low that it cannot support the weight of the topping ingredients during baking, and it may collapse, or not rise sufficiently to give the desired, light, airy internal crumb structure. In all too many cases, a gum line develops just under the sauce that will be next to impossible to resolve until we get the yeast level back up to where it needs to be. But, then the dough blows again. Now you can see why reducing the yeast level is not the correct action to take when the dough blows.

Even with cross-stacking, you must allow enough time for the dough to be cooled before you seal the boxes closed.

Another factor to consider occurs during the dough-making process. Due to traffic in and out of the cooler during the busier parts of the day, our coolers typically work harder, and operate at a slightly higher temperature than they do during the late night hours after the store is closed, or when business slacks off a bit. For this reason, I don’t recommend making the dough during the day, or even during the early evening hours. Instead, I recommend making dough a couple hours prior to closing, when the cooler will be operating more efficiently. By the time you’re ready to go home, you can down stack the dough boxes just before turning the lights off. While we’re on the topic of coolers, if you don’t already have them, consider installing plastic strip curtains over the door. Tests have shown that they will improve the operating efficiency of your cooler by as much as 15 percent.?

Tom Lehmann is a former director at the American Institute of Baking in Manhattan, Kansas.