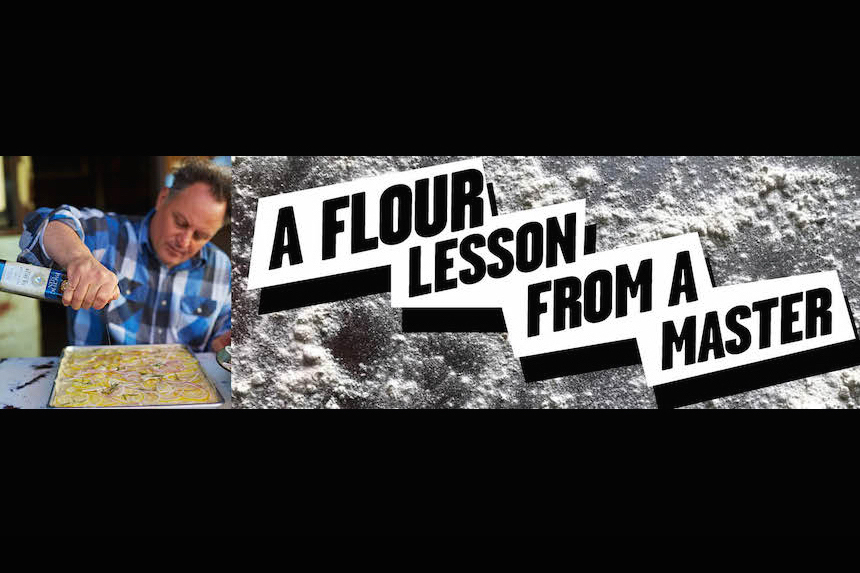 A Flour Lesson from a Master

A Flour Lesson from a Master

Chris Bianco has been atop the pizza world for two decades. He started humbly, baking pies in a nondescript Phoenix grocery store. What elevated him to one of the world’s most famous pizza makers, and what continues to make his pizza excellent today, is how he treats ingredients … particularly flour.

Bianco shows flour the same attention he shows tomato and cheese. To those who have tracked Bianco over the years, that is really saying something. In partnership with a California farm, he launched his own tomato company to elevate his sauce. He learned how to make fresh mozzarella when he was young and living in the Bronx. Today, his two Phoenix pizzerias still craft the cheese from scratch every morning.

So, how does he manage to elevate flour?

“You’re always looking at the apex of the window of opportunity,” Bianco says. “You’re always trying to push something to the next level. I always saw grain as the next frontier, just as it would be for artisan cheese makers.”

To Bianco, not all flours are created equal. They are more like cheeses: Some may be subpar, some may be average, and some will be masterful, expertly raised, and far beyond the rest.

Bianco achieves his “apex” flour — the best possible flour for the style of pizza he makes — by knowing what he needs, keeping on the cutting edge of flour culture, understanding his grain farmers and milling grain himself.

But first, what liberates Bianco to do what he wants with flour is that his pizza is not Neapolitan style. It overlaps with Neapolitan some, in its spare nature and thinness, but Bianco strays from the time-honored formula. He makes pizzas more Arizonan than Italian. Because he has broken from Neapolitan style, he feels he doesn’t have to use 00 flour from Italy.

“If you make 100-percent traditional Neapolitan pizza, then you have to get what you have to get,” he says. “Not against anyone who wants to bring things over [from Italy], but that’s not exciting to me.”

The result is that Bianco can use local American grain.

Bianco has relationships with his grain farmers. When dough doesn’t turn out totally right, he can call his farmer and try to get to the bottom of what went wrong with the grain (if anything). He insists that top-of-the-line grain farmers are cornerstones to the quality of his pizza. “The mills are the real story,” he says.

He believes so strongly in grain producers that he even thinks, on some level, that they do much of his work for him. He sees his work as one link in a chain, a chain that begins with the sun and soil and farmer. He believes, to some extent, that he isn’t making anything. He’s simply putting great ingredients together and staying out of their way.

“Technique is only so much,” Bianco says. “To take things to the highest level, you’re going to work with what the farmers are doing in the field.”

He says that pizza makers who want to elevate their flour don’t necessarily have to stick to local grains. Because grain keeps well during shipping, pizza makers can source grains from far parts of the country, milling it upon arrival.

Bianco mills grain at Pane Bianco, his large sandwich shop that functions as his base, the central location that does heavy lifting (milling, bread baking, pastry making) for his two pizzerias and two restaurants. “As soon as we mill it, we’re activating,” he says. “Just like dry oregano. When you bump it through your fingers, it’s heady and aromatic. The timer is on. You’ve pulled the string on the grenade for the flavor bomb.”

Milling grain, though, isn’t practical for many pizza makers. Logistics and technicalities strew the process, not to mention
financial, space and time obstacles. Sourcing flour from great millers works for those who can’t make their own.

An obstacle to both grinding high-end grains and sourcing great flour is cost. In part because of rising labor costs, the high-end grain approach will undoubtedly raise your pizza’s price point. But if done with attention and care, it should also raise the ceiling of how your pizza can taste. (“You can only go so fast in a Prius,” Bianco says.)

Over the years, the flour Bianco has used has changed. These days, he likes to use Blue Beard Durum for making extruded pasta at Tratto, his trattoria. Relative to his pizza, he may opt to bake bread with more White Sonoran Wheat, a heritage grain that has been grown in Arizona for centuries. Often, he bakes test batches of bread and pizza using new flour blends. For pizza these days, he uses a mixture of flours, two or three from grains raised in the American west.

“Most of all the pizza (flour I use) is hard red spring wheat,” he says. “We might soften it with a little White Sonoran Wheat. For the most part, I like the characteristics of a hard red spring. Sometimes, there’s (also) a variety called Edison Wheat, an old variety from Washington that’s making a comeback.”

Bianco strives for flour with a protein content of 13.5 to 13.8 percent since more protein gives pizza dough, once baked, an intricate and more robust architecture.

This is Bianco’s pizza preference, one he says he picked up from his youth in New York. He selects grains with this firmer texture in mind. That is why, despite his love for local, he doesn’t use 100-percent White Sonoran Wheat. White Sonoran Wheat grows readily near Bianco’s mill, but has less protein, resulting in “a softer crumb.”

He acknowledges, though, that White Sonoran might be right for pizza makers who are after that softer crumb.

Bianco emphasizes the importance of understanding what kind of pizza you want to make. This allows you to more
optimally tailor ingredients, like flour, towards your ideal pizza. “In the pizza industry, it starts to really set you free,” he says. “As an operator, you need to decide what you’re really going for.”

For Bianco, that is a pizza made in his own style, one simple and yet refined, one expressive of Arizona. In an effort to reach the high protein level he requires, Bianco even keeps on some of the grain’s bran when milling.

For this reason, local flours can help a pizza maker express a particular place, he believes.

“If you come back from Tuscany or Puglia, and grow that same grain here, it might not have that level of success,” Bianco says. “If we’re diligent and we understand what our backyard is good for, I think the possibilities are endless.”

Bianco says that his pizza is better now than it was 30 years ago and 10 years ago because of the ingredients. He understands which to get from his backyard, and which not to. Some of his pizza flour comes from local grain; some doesn’t. The common thread is that Bianco doggedly pursues the best ingredients — and that means searching nonstop for the best flour for his pizza.

“When you see grain as an ingredient,” he says, “that’s another level.”

Chris Malloy is a food writer based in Arizona.