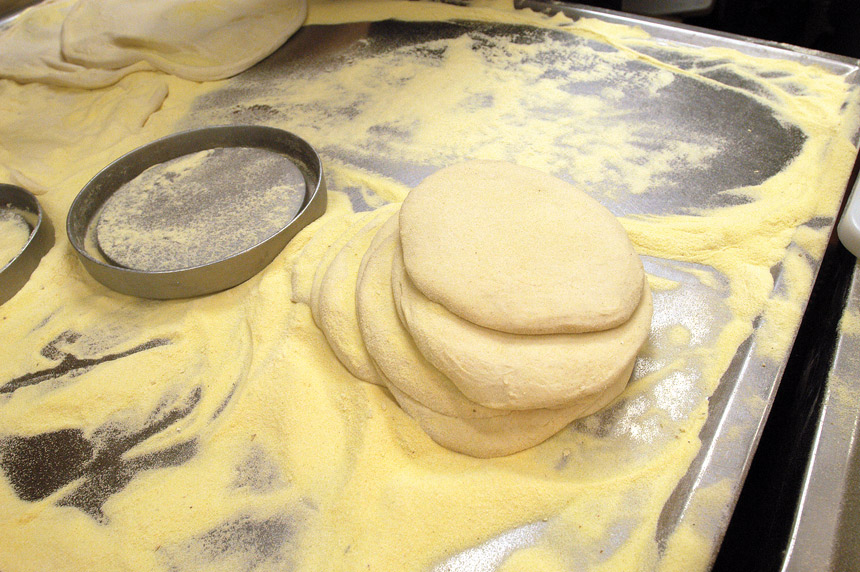 Knead to Know: A Little Rusty

Knead to Know: A Little Rusty

Q: I am just now in the process of buying equipment for my planned store. I’ve come across several mixers that I’m interested in, and I have seen one that has a bowl with a little rust in the bottom of it. should this be of concern to me?

A: Yes, and no, is the short answer. If you plan on mixing only dough, you’ll be glad to know that the rust, once removed from the bowl, will not be a problem. However, the mere fact that there is rust in the bowl indicates that you have a tin-plated bowl as opposed to a stainless steel bowl. Therefore, it is not advised that you mix sauce in the bowl since the acid
content of the sauce will react with any bare metal or any oxidation on the tin plate, resulting in a metallic taste in your sauce.

Under the worst of conditions where you have to mix sauce in a tin-plated bowl, remove the sauce from the bowl immediately after blending the sauce to limit the reaction time, thus either eliminating or reducing the flavor issue. A much better option might be to select a mixer that has a stainless-steel bowl rather than a tin-plated bowl.

Also, make sure your mixer has the correct size mixing attachments. You’ll want a flat beater. You’ll also want a reverse spiral dough arm. You do not want to have what is known as the “dough hook” (often referred to as the “J” arm as it looks like the capital letter “J”). Why? Well, the “J” arm allows the dough to continually climb up onto the top of the hook — where it receives little or no mixing action. This necessitates that you continually cut the dough off of the agitator unless the dough is at full capacity. The design of the reverse spiral dough arm, by contrast, forces the dough down into the bottom of the bowl, where it receives much better mixing action. This design also allows for the mixing of smaller size doughs without any problems associated with the dough climbing up on the hook. All in all, it’s not just a great convenience factor, but it also helps to provide improved dough consistency.

Q: I’ve heard that I shouldn’t dissolve instant dry yeast in the water before I add it to the dough, but does it really get mixed in if I don’t?

A: I know old habits are hard to break, but it will be properly hydrated for peak performance so long as your total dough mixing time is five minutes or longer. By pre-hydrating the yeast, you may actually be doing it more harm than good. When added directly to the water there is a probability that some of the vital amino acids within the yeast cells will be flushed out, resulting in lessened yeast activity and possible inconsistencies in dough feel due to the presence of glutathione, one of the amino acids flushed out of

the yeast cells. Glutathione acts essentially the same way that L-cysteine (the active ingredient in PZ-44) does, so doughs may become softer, and not hold up as well during long-term refrigerated storage. If you’re looking for this type of effect, like L-cysteine, it’s available in a commercial form sold as “dead yeast.”

Q: We have been getting some customer requests for natural or organic pizzas. Is there a way we can do this economically?

A: The words “natural” and “organic” are consumer buzzwords in the food industry. There have been supermarkets, delis and restaurants developed to cater to this market niche. The interesting thing about natural or organic is that your product doesn’t have to be 100-percent natural or organic to be embraced by the average consumer. For example, just stating that your pizzas are made using 100-percent organic or natural tomatoes in the sauce can suffice in the eyes of the consumer to make your product better than others. Organic flour is readily available from a number of commercial sources, and it fits pretty well into the existing specifications of many pizza flours being used in the industry. It shouldn’t pose a problem to just replace your existing flour with an organic flour and genuinely state that your crust is made with 100-percent organic flour. Additionally, there are a number of organic ingredients that you can purchase to use in making your dough or in topping your pizzas.