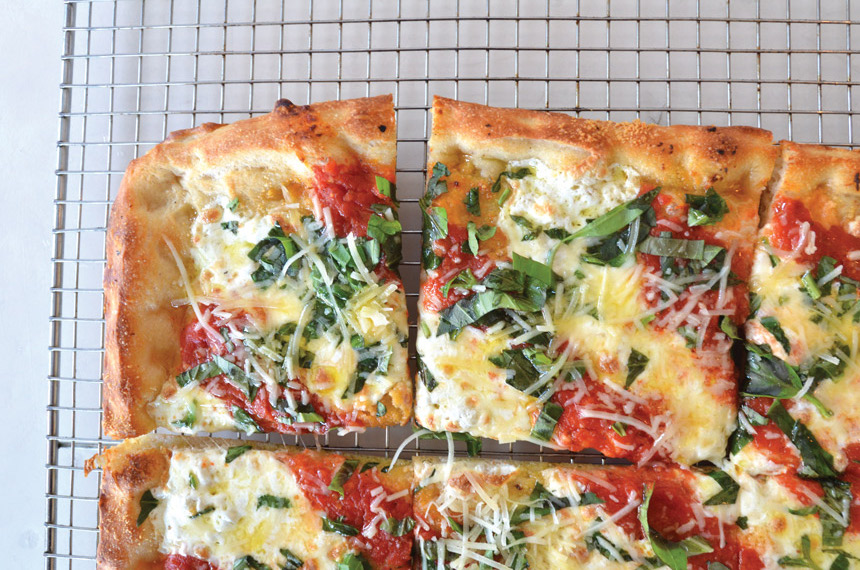 Bakery Pizza, Casalinga, Rustica, Upside Down Pizza, Square Pie (even when it’s a rectangle) … there are many relatively thick, focaccia-like pizzas baked in a pan that can arguably be considered Sicilian style. This style is generally believed to be based on Sfincione. The popular pan pizza is traditionally topped with a tomato sauce, rich with olive oil, onion, anchovies, pecorino or caciocavallo — and a generous helping of bread crumbs. Some food historians believe this style did not begin to include mozzarella until Sicilian bakers started working in Neapolitan-owned pizzerias in the U.S.

Recently this pizza and other square pan styles such as Roman, Detroit and the Grandma have had a resurgence, capturing the public imagination and giving pizzerias another opportunity to attract customers.

For the past 22 years I’ve been fortunate to work with Chris Decker, who has emerged as one of the premier proponents of Sicilian-style pizza. He shares his insights on creating the perfect Sicilian crust.

“The challenge of this pizza is developing a dough that is thick enough to stand up to the rich sauce and toppings, but still light and airy.” Chris also wants his pizza to have a crispy exterior that will display complex flavors. As he states: “I strive for a pizza that looks like a brick and feels like a feather. I want my guest to be shocked when they pick up a slice.” Enhancing the experience, a generous application of olive oil to the pan gives the bottom of this pie a texture that seems almost fried.

While the dough itself may not be particularly complex, the process is really the secret to this pizza. Some pizza makers will use an all purpose flour or bread flour for pan style pizza, but Chris likes to use a high-protein flour.

“The secret ingredient of my pizza is time,” he explains. “I do a five-day cold ferment for development of complex flavor. High-protein flour generally holds up better to long fermentation, and the extended time allows the proteins to relax so the dough loses memory and is easy to extend in the pan without overworking it.”

So here is the basic formula:

Combine water, yeast and half of the flour in mixing bowl. Mix on slow speed for 3 minutes. Let stand for 20 minutes. Add remaining flour and salt. Resume mixing on slow speed. After 3 minutes begin slowly adding oil as dough continues to mix. After
3 minutes increase to speed 2 for 3 to 5 minutes, until oil is completely incorporated. Reduce to speed 1 for 3 more minutes. Place dough on floured table, cover and let dough relax for 20 minutes. Divide and round dough. For standard 12×18 inch Sicilian pizza, dough balls should weigh 36 ounces. Place dough balls in containers, brush with oil and then cover and place in cooler for up to 120 hours (minimum of 72 hours). Before par-baking take dough out of the cooler for at least 2 hours. Be sure dough has warmed to at least 55 F.

Chris never lets a rolling pin touch this pizza. To retain gas and create a delicate crumb structure, the dough is gently extended by hand and placed in a well-oiled black steel pan. Do not use a shiny aluminum pan. It will impede the browning of the dough. Place the dough in the pan and make sure it is fully extended to the edges of the pan with a slightly risen cornicione. Top the dough with a very light coating of tomato sauce (about 3 ounces). Cover the tray with plastic wrap and place in a warm spot. Chris uses the top of his oven and has a wire rack on the oven for this purpose. The temperature on top of the oven is about 105 F, perfect for getting that dough to rise. Now you must be patient. I asked Chris how long it takes. His reply: “until they are ready.” He lets the dough rise until it is even with the top of the pan. Remove plastic wrap, being careful not to degas the dough. The risen dough is then carefully placed in a 535 F oven to par-bake for about 7 to 8 minutes until it just starts to show some color and interior has fully set.

Once the pizza is par-baked it should be cooled completely on a cooling rack for several hours and wrapped for refrigeration or even freezing. The cool down and refrigeration process is the true secret of getting a surprisingly light crust — because as the shell cools and is stored, moisture in the dough will evaporate and significantly lighten the finished pizza.

This method will also give you complete control, because the par-baked crust is placed in the oven and set at its precise peak of development. Refrigerated shells can be held for 1 week and frozen shells are excellent for up to a month as long as they are well wrapped to protect from freezer burn.

Before using the par-baked shells, remove them from the cooler and allow them to return to room temperature. Oil the pan, place the par-baked shell in the pan, top with sauce and cheese. Typically the Sicilian pizza is striped with diagonal lines of sauce on top of the cheese before completing the baking process. When the pizza has fully cooked remove it from the pan and place it directly on the oven stone for about 30-45 seconds to crisp up the bottom.

Once the pizza is removed from the oven it should be placed on a wire cooling rack and finished with freshly grated Romano cheese.