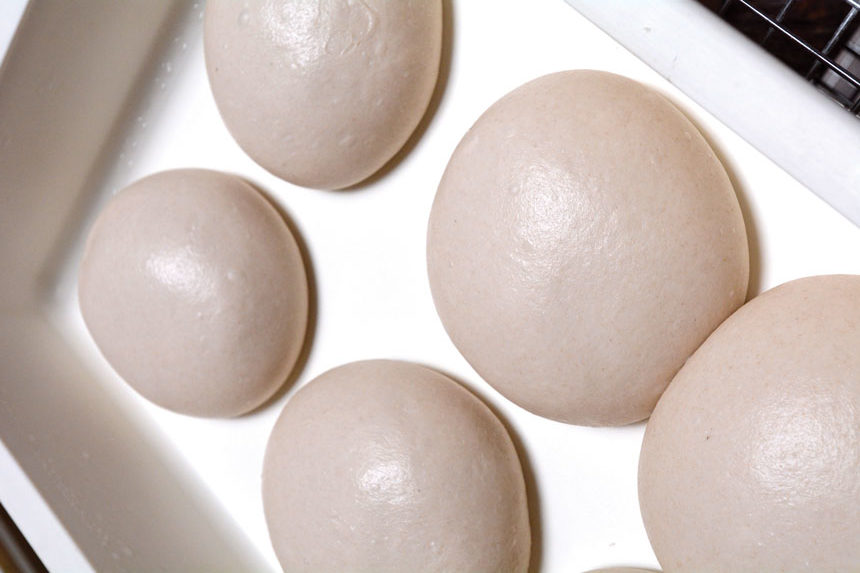 There seems to be an abundance of questions on how much a pizza dough should be mixed. While there are just too many variables involved to give any hard and fast numbers, the best advice I can give on mixing a pizza dough is to mix it just until it begins to take on a smooth, satiny appearance. At this point you will notice that the dough has a much drier feel to it and isn’t nearly as sticky as it was just a few short minutes ago.

Once the dough has achieved the smooth, satiny appearance stage of mixing, stop the mixer and check the dough for stickiness. If it still feels sticky don’t be afraid to mix it for another minute or so. As soon as the dough takes on a slightly tacky (but not sticky) feel it’s most likely properly mixed.

If you’re using a planetary-type mixer and mixing only in first speed this may take something close to 20 minutes to achieve. However, if you have to mix only in low speed, in all probability you are trying to mix too large of a dough size for your specific mixer. You will find that you will get much better mixing action and shorter development times if you can do the bulk of the dough mixing at second or medium speed. Typically we see total dough mixing times in the 8- to 10-minute range when planetary-type mixers are used.

When spiral-type mixers are used, regardless if they are single speed or two speed, the total mixing times are about the same at 8 to 10 minutes. But if a VCM (vertical cutter mixer) is used you can look for a total mixing time of 70 to 80 seconds.

I hear a lot about operators using the “window pane” test to assess the dough for proper gluten development. This is really not a very accurate test for a pizza dough since pizza doughs are not mixed to anything even remotely close to full gluten development (which the window pane test does a good job of showing). For those who might not be familiar with the window pane test, this is where a small quantity of dough (about the size of a hen’s egg) is carefully stretched between the hands to expose the gluten film. When the film is very clear and almost transparent, the gluten is judged to be fully developed. This is fine for bread production — but in pizza production it would be considered to be well overmixed. Judging gluten film development during the early development stages is very difficult and of questionable accuracy. This is not to say that pizzas doughs do not have a fully developed gluten structure. They most certainly do. It’s just that the bulk of the gluten development is left to what we refer to as bio chemical gluten development, which takes place during the fermentation period. With bio chemical gluten development the developed gluten structure is very fine and very relaxed/extensible. If the gluten were to be developed mechanically to this stage it would not be as fine of a structure and it would be considerably more elastic, which would make the dough more difficult to effectively open into a pizza skin (and the resulting crumb structure of the finished crust would be more breadlike than the open, porous structure we all like to see).

Q: Reducing agents … what are they and why are they used?

A: Reducing agents are ingredients that are added to our doughs to either reduce the mixing time or to increase the extensibility of the dough. Reducing agents can include any of the following: L-cysteine, glutathione (a.k.a. dead yeast), deodorized or non-deodorized vegetable powder (onion and garlic), and protease enzyme.

L-cysteine blended with dairy whey has been around for a very long time and has been extensively used in both the pizza and baking industries to help reduce dough mixing time and provide a softer, more extensible dough structure.

Glutathione (an amino acid present in yeast) is a relative newcomer, but it functions in essentially the same manner as L-cysteine. The only difference is that glutathione, sold as “dead yeast”, might have a marketing advantage. Since it’s yeast (just dead) where required, we can label it right along with our regular (active/live) yeast.

Then there is dehydrated vegetable powder. This is an interesting product as it reacts with the flour proteins in a slightly different manner than L-cysteine or glutathione. With either of these an overdose can completely liquefy the dough. But with the deodorized vegetable powder-based reducing agents you can only achieve a limited mixing time reduction (about 25 percent), and an overdose will not liquefy the dough. Like glutathione, its strength lies in the fact that where labeling of the pizza is required it shows up only as vegetable powder. If you have ever tried to add garlic or onion (in any form) to your dough you have most likely experienced the softening effect first hand if the single or combined amount exceeded 0.15 percent of the total flour weight in the dough.

Lastly there are the protease enzyme-based reducing agents. They are enzymes that attack and break down the gluten-forming proteins in the flour. In doing so, they are indeed very effective reducing agents — and at the same time they can be somewhat difficult to manage as they are prone to working faster at higher temperatures. This can be problematic if you are in the habit of saving scrap dough for later use (unless it is kept refrigerated at all times, otherwise you may find that your scrap dough bin is slowly turning into a doughy slime). Additionally, dough that had been overly softened by use of L-cysteine or glutathione can sometimes be salvaged by returning it to the mixer and mixing it until once again sufficiently extensible for immediate use. But since the protease enzymes completely destroy the gluten forming proteins there is nothing that can be done to salvage an overly softened dough when enzyme based dough softeners are used. On the other hand, where labeling is required, these dough softeners are typically labeled as a dough processing aid. Since they are completely destroyed by the baking process, they may not require labeling.