A two-part series on the Motor City Style

Detroit, Michigan. Have you ever been there? If you were to ask 100 pizza makers from across the country, I would bet maybe half have ever actually been to Detroit, and yet the very distinctive pan pizza that comes out of Detroit has been spreading like wildfire across the country for the past few years.

Detroit is known throughout history as “Motor City”,  the birthplace of the automobile boom beginning in the early 20th century… but it boasts a lot more. Detroit is the birthplace of the Motown record label as well as the second city after New York to host teams in all four major sports leagues and is the home of notorious rapper Eminem. If you’re reading this, those things are cool. But what about the pizza? Detroit and its outer limits are the home of Little Caesars and Jet’s, two franchises that have blown up since their humble beginnings. 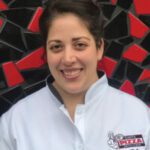 Detroit style is known for being cooked in a rectangular pan with caramelized cheese around the rim and stripes of sauce. The stripes are up for debate depending on who you ask, but certain characteristics define the style no matter if you come from the old school or are part of the new school. Regardless of which school of thought you follow, Detroit style has made a dramatic impact on the pizza industry and chains like Pizza Hut have started making it, which tells me Detroit style is here to stay.

I had the pleasure of visiting Detroit not too long ago, and boy, was it eye opening. Through my own research and product development I knew what the main characteristics were and what I was looking for, but I had no clue what the original shops were making. Originally, the pizzas were made in blue steel pans that were once used to clean tools but then utilized to make pizza because… why not? Shops like Buddy’s and Cloverleaf are still using the old pans. But blue steel is not made anymore, so unfortunately what pans are out there are highly coveted.

The main cheese used is Brick, native to Wisconsin. It melts nicely like a mozzarella and has a flavor profile that is fairly mild, but as it ages can become more pungent like a cheddar. Some shops like Buddy’s are putting pepperoni and other ingredients under the cheese while some put them on top. The sauce is not super thick and I have seen anything from stripes to splotches to everything in between, but I never saw any pizza that was too sauce forward.

In terms of dough process, I managed to speak with someone within the Buddy’s company; but unfortunately, I am not privy to specific proprietary information. What I could gather is that they, like a lot of pizzerias in Detroit, are doing it the same way they always have or as close to the same as possible. They are using fresh yeast, a mid- to low-range protein flour, and there is no browning agent and no fat or very little fat in the dough. For water I suspect a lower hydration not exceeding 60 percent. The dough is made same day and is proofed in the pan for a number of hours before being cooked. The representative from Buddy’s explained to me that it “should be light and crunchy”. During my eating tour of Detroit, I noticed the height of each pizza was only about one to 1.5 inches and had a crumb structure that was tighter with many small bubbles. There was a crunch on the bottom, but it was never super distinct. It was the type of crunch that you get from contact with the pan and length of cook time, but not the thicker and more sturdy crunch you get from higher hydration. The lasting impression I got was this fervent sense of pride in Detroit and its style of pizza, but even the OG spots like Buddy’s are happy to see what Detroit style pizza has become and how far across the world it has spread.

As for the new school of thought, I spoke with a few well-known Detroit style pizza makers, and no process was the same. The defining characteristics of a caramelized cheese crust made in a rectangular pan were about the only two things that were the same. With technology and as much knowledge about pizza and fermentation out there, it is no surprise to me that everyone is doing something slightly different but, in their minds, making it better. Flours range in proteins from low to high depending on maturation times, and hydrations are upwards of 70 percent. Some are utilizing an autolyse during the mix and some are not. Some are making dough same day and some are waiting days before use. I don’t see many pizzerias outside of Neapolitan utilizing fresh yeast. But I suspect this is more because of consistency and shelf life than because they prefer the flavor over instant and dry active.

Cheese blends vary, but a lot are using cheddar and brick to get the caramelization around the edge. How far down the side of the pizza the caramelized cheese goes is a big eye catcher. Some are going the traditional route of only part way to maybe halfway down, while others are going all the way down to the bottom of the pan fully encasing the dough.

Baking from raw proofed dough or using a par bake seems to be the hot debate these days. The old school is baking from raw, while the new is doing both. Par bakes give a different texture and overall mouth feel to the finished pizza, but can also be used because of shop conditions. Sometimes a par bake comes in handy because you can prep many in advance and makes it easy to transport and store for off-site events.

No matter what techniques you use, it is always better in my mind to know where you come from so as to better understand the why and where you are heading. The city of Detroit might not be a hot tourist destination these days, but “The Detroit” will forever live on in the pizza industry as one of the tastiest and cheesiest styles worth exploring.