The job candidate you just interviewed is a hard worker who shows up on time and knows how to deal with customers. At least that’s what the eager applicant told you. You want to make sure, so you call some of the references the person gave you.

The only problem is that some previous employers might tell you only the date they hired the person, the date he or she stopped working there, and whether they are eligible for rehire.

“A lot of places will only give you that information,” says Suzanne Duhig, director of human resources for the 48-unit Extreme Pizza. She asks questions anyway. “Sometimes you get somebody who is willing to talk, so it’s worth a try.”

The strategy has worked. “I have had people say, ‘You do not want to hire this person,’ ” she says. “The best reference is when someone moves to San Francisco, where we are, and I call their old company and they say, ‘We wish she hadn’t moved.’ ” Jennifer Shaw, a partner in the law fi rm Shaw Valenza LLP, says there is no law that says former employers are only allowed to say the dates of hiring and termination and whether the person can be rehired. “It started because employers got nervous that they would be sued for defamation. It’s grown into this legend that everyone sort of believes.”

No matter how much information the person seems willing to give, the key question is the one about rehiring. “If you ask, ‘Would you hire this person again?’ and they say, ‘Uh, well, we don’t really give references,’ then you have your answer,” she says. “Or they might say, ‘Are you kidding? I am heartbroken that she left.’ ”

Leslie Lockard, an employment attorney in private practice in Norwood, Massachusetts, says she does not recall any cases where a job applicant sued a former employer over what they said during a reference check. In some states, employers have the right, even the duty, to convey unfavorable information about a past employee. “In Massachusetts, employers can provide information as long as it’s truthful,” she says. “For example, if the former employee had a violent outburst or got involved in a fight, that would be something you have a duty to speak up about.” 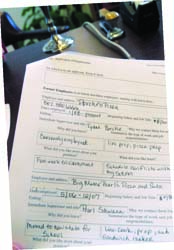 There are federal laws that protect the applicant, and some states have their own laws. Consult an employment attorney.

Steve Rosenberg, co-owner of Tino’s Café Pizzeria near Minneapolis, says he does talk to his attorney about employment issues. He stays away from asking, and from answering, certain applicant-related questions. Instead, he sticks to one basic inquiry: Did the employee really work there? “It’s just a verification to see if they are honest, did they actually have restaurant experience,” he says.

Sometimes applicants don’t want Rosenberg to call previous employers because they are still working at another restaurant. They’re applying for a second job, which is okay with Rosenberg. “I am glad to give them some hours,” he says. He says one way to avoid reference check issues is to get current employees to refer their friends and former coworkers. “I am more likely to hire someone a trusted employee knows,” he says. “We just lost a dishwasher, and one of the cooks said, I know someone.” The current employee gets $100 if their referral stays employed at Tino’s for 90 days.

Lockard recommends having the applicant sign a statement authorizing you to ask former employers questions about the applicant. “Probably it would be best to have a lawyer write it up,” she says. “We are used to the nuances of how you word everything.” You may call any former employers, not just the ones that the job applicant tells you to call. “What I tell my clients is you don’t even call the references the employee gives you,” says Shaw, who has worked with restaurant clients. Instead, call the main number for the place where the person used to work. Ask to talk to the Human Resources department. If it’s a small company with no formal HR department, ask to talk to the person’s supervisor.

Sometimes applicants want you to talk to someone who really liked them, not the person to whom they directly reported. Shaw says she wanted to check the references of someone she’d interviewed for a secretarial job at her firm, which is in Sacramento. “I called the number she gave me as a reference and it was clear this was a friend who expected my call,” she says. “It was a setup.”

Duhig says she doesn’t bother to call the applicant’s personal references. “I don’t want their friends,” she says. “They’re your friends for a reason. They think you’re great.” She calls several former employers. “I understand it does not always click with the last employer, so I try to get a few names from their resume,” she says. “If they had been with the place eight years, that’s not, not clicking. Something has gone wrong.”

Shaw agrees that it’s a good idea to contact several references. Don’t skip the reference check because you’re in a hurry to hire someone by the weekend. “It takes longer to fire someone than it does to check references,” she says.