If you run a full service restaurant, it’s difficult to figure out how many tables to assign to each server. You want customers to be served promptly and accurately so they return. You also want servers to earn enough tips to keep them happy. Robert Smith, director of operations for Pizza Antica in California, says one factor is the level of service. Servers at Pizza Antica, which has four locations in the San Jose and San Francisco areas, work four or fi ve tables and are expected to offer a high level of customer service. “Within two minutes after the guests arrive at the table, the server should greet them, point to the menu and suggest a specific appetizer, and tell them there is a wine list on the back of the menu,” he says. If the servers had to handle more tables, guests would wait longer to be greeted, and they might perceive the place to be too busy. “If they wait four minutes, they say to each other, ‘It’s going to be slow so we better hurry and get our order in. You order the pepperoni and I’ll order the cheese and let’s get out,’ ” he says.

At lunchtime, servers work five or six tables. Customers order fewer items, don’t
read the wine list, and often need to eat in less than an hour, so they call for less service. Travis Redmon, who owns The Pizza Kitchen in Knoxville, Tennessee, says the tables-per-server ratio also depends on your menu. “If you have a lot of menu items, you want servers to sell as many items as they can,” he says. “If they have many tables, they can’t upsell because they don’t have time.” Less upselling means lower tips. Servers at The Pizza Kitchen work fi ve or six tables. “If they are looking for 20 percent average on their tips and their goal is to earn $100, they have to sell $500. They have to be able to do that in a way that’s not so diffi cult that it’s impossible,” Redmon says. Newly hired servers get one or two tables while training. James O’Brien, owner of RedRocks Firebrick Pizzeria in Washington, D.C., says he has sections of seven or eight tables. “We are more casual dining,” he says. New servers work with three or four tables. When RedRocks’ patio is open, outside servers work eight or nine tables because those customers tend to stay at their tables for a long time. “Otherwise they won’t be making as much tips outside,” he says.

Another issue is how to assign sections equitably. Customers like to sit at certain tables, and the host or manager must accommodate those wishes. At the same time, each server should get a fair share of eaters, and not get stuck working the station that is farthest from the point-of-sale system or from the kitchen. O’Brien says at RedRocks, servers are assigned sections, but those assignments don’t kick in until the place gets busy. “If we have three servers on at fi ve o’clock, we will rotate tables. Someone takes one, then the next one, until the point where all the sections are filling up, then we go into sections,” he says. The first server who shows up for the 5 p.m. shift gets to choose their section. To help figure out how many servers to schedule, owners and managers check historical sales to predict whether they will be busy. The point of sale system can show how sales were on the same date last year, and also the same day of the week for the last couple of weeks. Smith says managers at Pizza Antica also have a red book, a hardbound accounting notebook, where they write notes.

The weather often affects how many people to schedule. Smith says Pizza Antica’s patio needs three servers. If there’s rain or blustering wind, managers can call servers and tell them not to come in. If they can’t reach those workers and they come in anyway, managers talk to them at the start of the shift. “You say, ‘The weather is bad, does anyone want to leave?’ You pay them for two hours’ work,” he says. If no one wants to leave, then the restaurant might have a night in which each server gets two tables. “It’s not an exact science.” The tricky part, he says, is that waiters must be paid a minimum of $8 an hour because California does not have a tip credit. (Check the U.S. Department of Labor’s Wage and Hour Division, or even better, your attorney, for information on these laws.) Another factor in choosing whom to send home is that servers can bus tables, but bussers cannot serve. They are not trained on wine lists and other details, and besides, says Smith, “Some bussers are not old enough to serve alcoholic beverages.”

Redmon says when things are slow at The Pizza Kitchen, he sends someone home, but usually not a server. He sends home a hostess or kitchen worker, someone who doesn’t have a tip credit and therefore earns higher wages than servers. If he does send home a server, he makes sure the other servers know that person exited, so they can take over that section when customers arrive. What if you send people home and then it gets busy? “Roll your sleeves up,” he says. ? 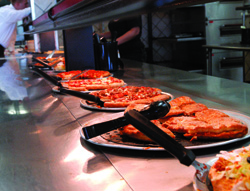 Figuring out how many tables per server is slightly different in a buffet concept. Steve Hawter, vice president of training for Coppell, Texas-based CiCi’s Pizza, says the 640-unit chain doesn’t have servers. “We have stock people,” he says. “Their responsibility is to stock the buffet, and more importantly they do other things like communicate with guests, offer help, take special requests for pizzas, and bring those to their table.” The restaurants have a 12-foot buffet with pizza, pasta, salad and dessert. Customers pay when they enter, help themselves to the buffet, then sit at any available table. When the place is less busy, the staff consists of one stock person plus one manager. On busy nights the restaurant has two or three stock people, plus one manager. The restaurants do not have offi ces, so the manager is in the front of the house all the time. “They act as another service person,” Hawter says. “They can recognize guests’ needs.”