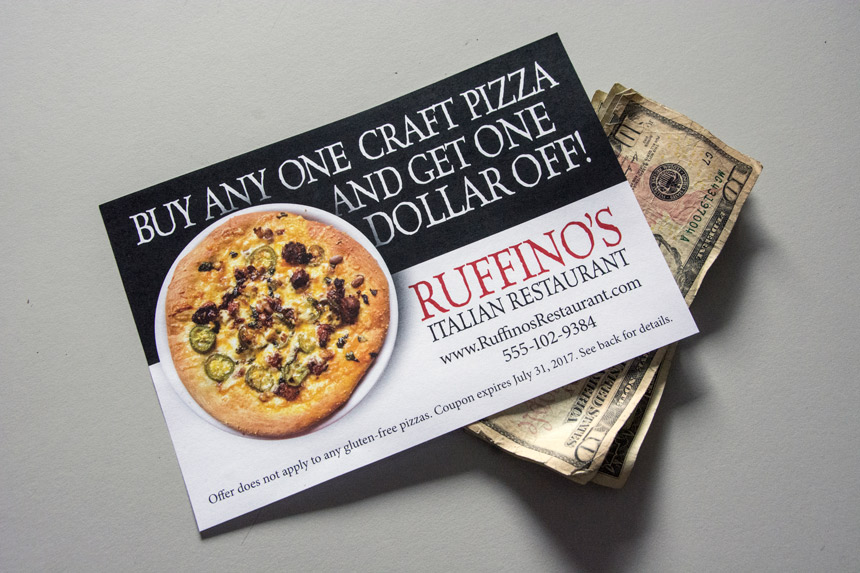 Coupons are still a viable marketing tool, if used wisely

Don’t tell Peter Wiley the paper coupon is irrelevant. Wiley, one of the co-founders of Kettering, Ohio-based Rapid Fired Pizza, says the chain sends out coupons in postcards, local discount magazines and newspaper inserts in Cincinnati, Columbus and Dayton, Ohio. These coupons get measurable results. “A lot of people say ‘why do I need paper, direct mail is dead?’” says Wiley, who is also director of marketing for the 14-unit chain. “It goes out and you see sales go up and customer counts go up, and nothing else is causing that.”

Not only are coupons still viable, but some coupons are also more effective than others. “Typically the ad is food focused with three coupons,” Wiley says. “It’s hard to get a big food shot but we try to include a picture of a pizza.” Sometimes the ad features a whole sheet of coupons. The fast-casual Rapid Fired Pizza offers craft pizzas baked in three minutes, so a dollar off is usually the most popular coupon because it appeals to one person buying one pizza.

The wording of the offer is important. One coupon campaign failed to include a disclaimer about which foods may not be included in the discount. The deal was for two drinks and two pizzas for $16.95. Some customers used the coupon for gluten-free pies, which usually have a $6 upcharge. “We fixed that for the next print run,” Wiley says.

Paper coupons are good for attracting new customers, says Steve Cocca, owner of Cocca’s Pizza, with six locations in the Youngstown, Ohio, area. Cocca’s Pizza, which was founded by his parents in 1982, has long used paper coupons. One detail that makes coupons more effective is to make them valid for a short time. “It creates urgency that makes people use it right now,” he says. “If you put a long period of time they forget about it.”

Cocca’s Pizza sends coupons in direct mail pieces every five to six weeks, and also puts coupons in the local discount magazines. “There are so many awesome pizza places in Youngstown,” Cocca says. “It’s a very competitive market. There might be customers who order pizza two or three days a week but they might go to other places.”

Now Cocca’s Pizza is adding online coupons because it already has online ordering. Cocca says one challenge is to make sure the point-of-sale system in all six stores, not to mention the managers in each location, can process the discounts. Also, both paper and online coupons present an age-old challenge. “How many times can people redeem a coupon? If you put out an aggressive coupon, if they use it each time, you may be discounting your product.”

Discounts are indeed attractive to restaurant-goers. According to Port Washington, New York-based research firm The NPD Group, in its report, “Losing Our Appetites for Restaurants,” 75 percent of consumers who have decreased their restaurant visits say they watch how they spend their money on most or all purchases, and a high percentage of these respondents think that restaurant prices are too high. Also, light users who visit restaurants one time per week said that discounts would entice them to visit more.

“Consumers are still looking for a deal,” says Donna Josephson, chief marketing officer for Fazoli’s, based in Lexington, Kentucky. “They are willing to cut the coupon or save it in a mobile app. Others say make it easy, offer everyday value that doesn’t require coupons, but there is still a vast audience out there for coupons.”

The 220-location Fazoli’s uses paper coupons in Sunday newspaper free standing inserts (FSIs), and is testing online and mobile versions, as it is getting ready to launch mobile ordering for single orders. The chain already offers online ordering for catering. “With that comes a loyalty feature, treating consumers with surprise and delight,” Josephson says. One goal is to increase the frequency of orders, moving people from light to medium to heavy users.

One thing that works for Fazoli’s is to give the customer choice. “If I give you a free cookie with any purchase, the redemption is almost zero,” Josephson says. “If it’s $2 off $5, that gets higher redemption. Instead of being very prescriptive, you get to choose whatever you want.”

For some, a low rate of coupon usage is acceptable because the coupon serves other purposes. Buddy’s Pizza in Detroit moved from the traditional paper coupons to online. Redemption has been low, says Wesley Pikula, vice president of operations, because people have to do a little extra work to visit the Web site, find the coupons and print them. Still, one advantage with online coupons is that the technology can collect data on how long a visitor stayed on the Web site, which pages they visited, and whether they looked at the menu, for example.

Pikula adds that coupons are one small part of the marketing effort for Buddy’s Pizza, which opened in 1946 and now has 11 locations. The eatery also does community outreach and social media. “Independents have a tremendous advantage over chains because they have a story,” he says. “Chains don’t have a story.”

Coupons can fit in with that storytelling, says Gregory Weiss, president of Adrienne Weiss Corporation, a branding firm in Chicago. “If you have a brand story you want to take advantage of every opportunity you can to tell that story,” he says. For example, the story could involve authentic regional cooking, or pizza like momma used to make. “Your coupon should have some language that strengthens that.”

As part of a branding strategy, coupons can be much more than a way to offer a discount. “It’s an opportunity to communicate about your brand and you should take advantage of that,” Weiss says. “If your voice is cute or funny or serious or homey, make sure that comes through in your coupon.”