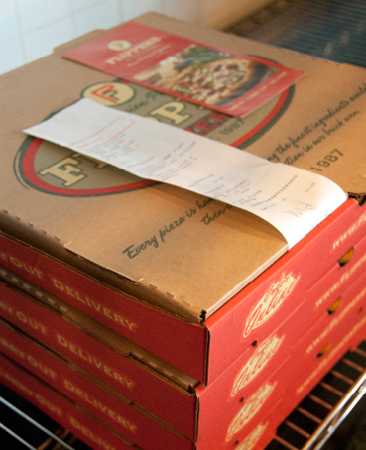 Big Dave’s delivered a lot of orders. I’m convinced that one of the biggest reasons we dominated the delivery market in my area was that we measured the amount of time that elapsed from the phone call, in the oven, time out the door and time to the customer’s door.

I became very obsessed with delivery times when the world’s fastest pizza delivery company opened a location a block away and across the street. Prior to them coming to town I enjoyed 65 percent market share in my zip code. After they came, I started to lose market share to them because they were fast and I was not. “It will be there within the hour” was the closing line we used at Big Dave’s for 10 years. On a slow day we delivered in about 30-35 minutes, and when we were in the weeds on the weekends you could expect it to take over an hour. I was under the impression that my loyal customers wouldn’t buy an inferior, cookie cutter bland pizza. I was right and wrong at the same time. Some of my customers tried them once or twice (to be expected) and came back to me. Other customers were dazzled by their speed and I lost them. This was not acceptable. I took it personally.

We implemented several new ways to improve our delivery times. I actually learned how to do it by reading my competitors’ training and operation manual. Heck, if they can do it why can’t I, I thought?

Excuse: the other guys only sell pizza and soda with a few other offerings. They hire and have more drivers on staff than we do. The real reason they were eating my lunch was that they had a higher sense of urgency than we did. They were guaranteeing 30 minutes or the meal was either free or reduced.

This is what my team did to beat them at their own game:

We pre-tossed, sauced and cheesed 10 to 30 doughs and racked them on a stacking wire rack shelf during peak rush hours.

The pizza makers were broken into two groups. The first person’s job was to never let the rack run dry. The second person was the pizza dresser — he simply took the proper sized pizza off the rack and topped the pizza.

The toppers used digital scales / cups, and were trained to assemble the pizza and have it in the oven in less than 60 seconds.

Oven tenders baked it to perfection, chopped and boxed them and expedited them to the heated delivery area.

Drivers announced to the kitchen their “leaving the building” times, such as “22 minutes out!” We installed a large digital clock by the back door to make it easy. The kitchen responded with a confirming “Thank you!” If they failed to say thank you, the driver re-announced his or her time out.

Whenever the driver-out times started to get close to 25 minutes, my manager was all over it. He would temporarily make a kitchen person a driver and expedite them out the door with a few easy deliveries to take the pressure off the drivers. Most of the crew was cross-trained to make it, bake it and take it.

We tracked the elapsed times through our POS system and added drivers to the schedule when we felt we were going to get slammed. Many times I scheduled employees as both kitchen and driver staff for their shift.

After a few weeks of ironing out the bugs in the system we were ready to pull the trigger and get all of our lost customers back. We advertised “29 Minute Delivery – Guaranteed – Or FREE! Who’s got the fastest pizza in town? Big Dave’s.”

We got so good at it, my competitor closed down the operation and left town after a few years. Better them than me.

Why did this work? It certainly wasn’t easy or pretty. We simply had to do it or suffer declining sales and profitability. We had to leave our comfort zone and do what had to be done. The minute the truck my competitor sent to pick up all of their equipment, lower the sign and strip the building had cleared town, we ended our guaranteed time. Our delivery times didn’t slip after that because everything we did was under a time measurement system.

Bottom line: things that are measured are improved.

My entire crew knew what the expectations were. We were going to be the fastest deliverer in town. No excuses. The numbers were tallied nightly and the daily report card was posted for all to see the following day. When the expectations are crystal clear, and when they are measured, they improve. Things that are not measured get out of control. Does you management team (let alone your hourly crew) know your operational expectations? Have you written them down or do you assume the crew just knows?

Measurable Financial Indicators should not be ignored. These MFIs must be reviewed daily, weekly and monthly. The feedback of the daily/weekly performance should be posted for all to see. The next step is to implement Measurable Service/Product Indicators. Secret shoppers as well as customer feedback via phone or in-person surveys accomplish this. My feedback mechanism was to call back five delivery and interview five dine-in customers every day. The results were quantified and the percentage score was posted at the end of every day on the wall, for all to see.

My observations show that mature operations are less likely to adopt newer, better management approaches, mainly because altering embedded processes, mind-sets and behaviors that might have worked well in the past is an enormous challenge. Don’t fall into this trap.