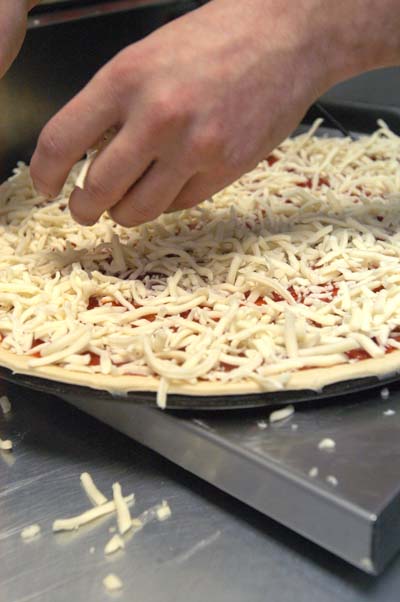 Do you know how to factor loss into your financials?

“All along the chain of custody, from ordering, receiving, storage, preparation and accounting for it all, there is the potential for loss,” says Allen.

And almost always when it comes to loss, restaurant owners are caught off guard, Allen says. “In a lot of cases, they know something is happening but they don’t know how to pinpoint it or stop it,” he explains.

Bill Marvin, a Seattle-based industry consultant for The Restaurant Doctor, says the same. “Most of them are surprised,” he says. “They want to believe that everything is fine, and since there can be pretty good profit margins in pizza, this can cover up a world of sins, but most have no idea of what they could be doing.”

One of the problems, says Marvin, is that there isn’t a national median specifically for pizzerias, rather than for restaurants in general, by which to benchmark and compare costs and expenses. Getting a handle on the full range of loss scenarios that can happen poses another difficulty, says Jesse York, director in the New York office of Conway MacKenzie. Headquartered in Birmingham, Michigan, the firm provides financial, operational and strategic services.

“It’s easy to understand large cost drivers, like ingredient costs and labor rates,” York explains. “But it’s difficult to separate out scrap, inefficiency and other short-terms changes in costs from historical results and to forecast them correctly.”

Although pizzeria operators shouldn’t passively tolerate loss, a certain amount will occur. “You’re never going to have 100-percent yield on inventory,” says Allen. As such, some loss should be worked into the operating budget, particularly since doing so will help restaurant operators identify how much loss is occurring and where.

“If you can’t measure it, you can’t fix it,” says Allen. “One of the biggest holes that exists is that restaurant operators don’t know their theoretical costs — if there isn’t spoilage, breakage and so on, what should this be costing — and actual costs.”

In order to determine what their food costs should be and how far from this they are, pizzeria operators should have standard recipes for all their products, and standard preparation methods as well, says Marvin.

“You need to itemize what every ingredient costs and then you will know what your food costs should be, allowing you to compare them to what they actually are,” he explains. “But doing these calculations isn’t anyone’s idea of a good time, so it typically doesn’t get done.”

However, without the ability to establish detailed budgets, track metrics, determine their costs and measure them against the budget, identifying loss is difficult, says York, and valuable time and resources may be wasted in the attempt to identify and adjust.

It is a tedious and exacting endeavor, and it requires drilling down in minute detail, says Allen. “For example, does the recipe call for 10 pepperonis, and are employees putting on 10, or are they actually putting on 14?”

Or, consider free-tossing cheese. “This kills pizzerias,” Marvin says. “You need to standardize, you can’t just leave it up to the whims of the troops. Instead, you can use cups, such as one cup of cheese for a small, two cups for a medium and so on.”

Allen says that generally, food costs run around 30 percent, although he’s seen restaurants — very troubled operations close to going out of business — where food costs have been as high as 70 percent. Food and labor combined generally should run around 60 to 65 percent. He’s found, again generally, that preventable loss hits around one to five percent of the budget, although this is for a well-run operation.

Marvin likes to see less than a one percent difference between what food costs should be and what they really are. “Some loss is inevitable, but I don’t accept it. I note it and correct for it continually. It’s not ok to accept it because it’s taking money away from the owner and the business.”

Address loss through training, improving processes and tightening controls, says Marvin. Consistency is also essential. Otherwise, he explains, there will be too much variance in production costs and profits — not a good restaurant or business practice, he adds.

Operators should manage loss to the targets established for food, labor and other variable costs, says York. “If one item goes up, like ingredient costs, the operator needs to tweak pricing, efficiency or product composition to continue hitting those targets,” he says. “Having defined metrics and an eye towards continuous improvement are key traits of successful restaurant operators.”

But don’t overlook one important concern in the process, cautions Allen. “Remember the guest experience. You need to control for loss and make a profit, but it’s not about being really cheap with the pepperoni — you can’t compromise the guest experience. If you do, that guest will go somewhere else.” And that’s the real loss concern.

“Based on our known food costs and retail price, we don’t like to deviate more than a few percentage points,” says Bramwell, referring to the percentage of loss contained in their operating budget. “More than that is a trigger for retraining and better operational control.”