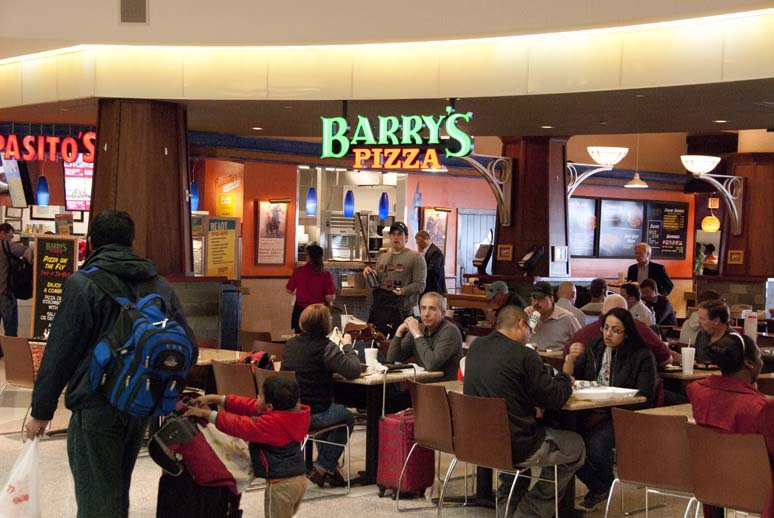 Can pizzeria owners reap benefits by branching out to non-traditional locations?

Expanding your operation to an airport, ballpark or train station could put excited sports fans, weary business travelers or families within a few feet of your doors. However, having built-in foot traffic in a non-traditional location comes with operations questions.

“That potential foot traffic is built in and based on the history of a venue, it is easier to forecast potential sales and labor scheduling,” says Richard Weil, vice president at National Restaurant Consultants. “The downside is you are probably not operating 52 weeks or 365 days a year like a brick and mortar.”

That dynamic especially holds true at a ballpark or stadium where the home team’s games might be staggered with a break of a few days or a week or two between events. Pizza Forte, based in Las Vegas, operates two locations at T-Mobile Arena, the home for the National Hockey League’s Vegas Golden Knights. Pizza Forte’s arena locations opened in April 2016, well before the Knights skated in their inaugural home game. While the Knights were scouting potential front-office personnel and players, Pizza Forte was going through its own scouting process. “In a brick and mortar, you determine your own destiny, but for an arena location, it is kind of out of your control,” says Mimmo Ferraro, founder and partner of Pizza Forte. “They have to want you and they do the scouting to see if you fit for their environment. We were fortunate that T-Mobile wanted to keep things local.”

Having cleared that first hurdle of obtaining a spot in the arena, Pizza Forte faced fairly common challenges after setting up shop. How would parking be handled? Could employees enter and exit T-Mobile Arena in an efficient manner?  Arena ownership headed off many of those potential issues by creating an off-premises parking lot and a separate employee entrance. Ferraro provides an employee list, which enables his staffers to go through a security checkpoint and be on the property in a timely manner. Making sure the lights are on for all public arena events and some private events goes a long way. “You don’t want customers coming in and seeing things are not operational,” Ferraro says.

Varasano’s Pizza in Atlanta’s Hartsfield-Jackson Airport has to keep another issue in mind when it comes to employee hiring and scheduling. To get through the security gates at the world’s busiest airport, every staff person has to have a badge that has gone through processing by Homeland Security. When suppliers bring boxes with them, those items must pass through security as well. It limits the number of suppliers who are able to work with the airport pizzeria. “Individual distributors have to get licensed and bonded just to bring flour and cheese through the gate,” says Jeff Varasano, owner. “Typically, we use several suppliers for specialty items. But from an airport standpoint, that is not practical because the supplier would have to get a $10 million bond.”

The daily commute for employees into Hartsfield-Jackson is a whole other ballgame. Using a park and ride or full-route public transportation is much more cost effective than parking at the airport. Once a Varasano’s employee gets to the airport, there is still another 45-minute to 1-hour chunk of the commute inside the airport that includes going through security and walking through the terminal.

From an operational standpoint, Varasano’s shares prep space with other restaurants. That leads to some late-night and early-morning prep times in order to make sure space is available. One other consideration in an airport: all of the knives and pizza wheels have to be tethered to a wall for security purposes. “Operationally, it is difficult,” Varasano says. “Can you imagine that difficulty of limited space?”

For Station House Pizza in Port Chester, New York, operating in a train station that serves commuters started with one long-term obstacle. Owner Michael Jannetta had to get approval from the Metropolitan Transit Authority, which owns the station, to install a coal oven on the premises. “We bought the lease from the former owners and we had been in that space for a year before we got approval (for the oven),” Jannetta says. “We rent directly from the MTA. They have their own fire marshal and code.” Being in a vintage train station means that any cosmetic changes Jannetta wants to make require a waiting period for answers. “It’s a lot of bureaucracy,” Jannetta says. “A question could take
30 days.”

Considering the additional time and resources devoted to operating in these nontraditional locations, where does the payoff happen? The sheer volume of people in Hartsfield-Jackson provides Varasano’s plenty of foot traffic. “The money is 2 ½ times that of our street site,” Varasano says. “The airport rules say we have to be open by 8 a.m., so it’s a long day. If we are doing triple the business as a street site, we also have triple the repairs. In the five years we have been open at Hartsfield-Jackson, we pray for rain delays, but it all evens out.”

Weil has seen that process play out many times at George Bush Intercontinental Airport in Houston. Weather delays in Chicago might cause passengers to have a 45-minute or hour wait time for a flight. “That’s a really good windfall because people are likely going to go to a bar or eat,” Weil says.

For Ferraro at Pizza Forte, a windfall and employee morale boost showed up when the new expansion team made an unexpected run to hockey’s 2018 Stanley Cup Finals in May and June. Extra home games did not just mean increased revenue for employees wanting their
40-hour weeks or overtime. “The way the town embraced this hockey team was absolutely impressive,” Ferraro says. “I think it had a lot to do with the Golden Knights being the city’s first pro team. It enabled residents to show the strength of the city.”

Brian Hudgins is a freelance writer based in Louisiana.