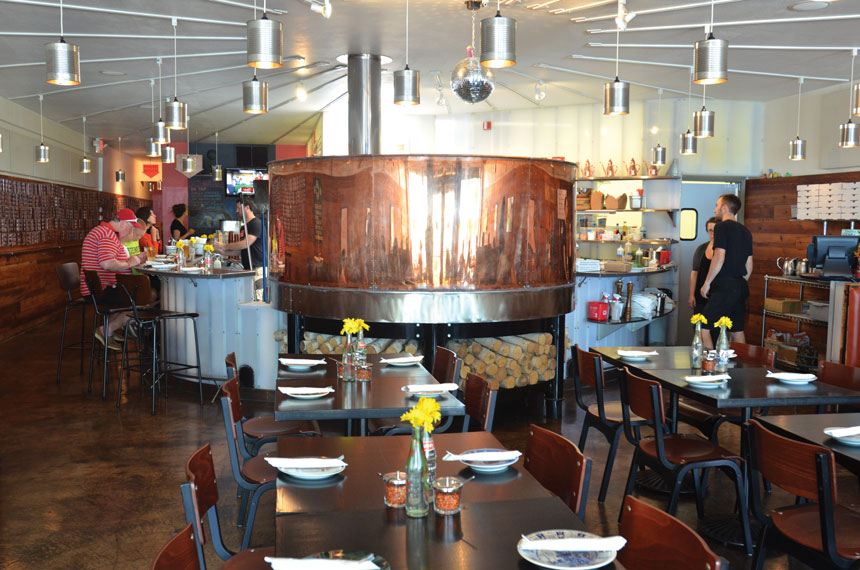 Having Designs on The Place

Having Designs on The Place

Whether it’s your first restaurant or the fifth location of your growing company, there are many design elements to consider when opening a new location. Operators and design experts say these considerations range from whether the place is big enough to fit a pizza oven to whether the space reflects your brand’s identity.

“Find the heart of your concept and embrace that and work around that,” says Steven Hewett, project manager for HDG Architecture in Spokane, Washington. “If it’s pizza with a specific type of crust, maybe you put the oven on display.”

Operators that install the oven as the focal point often have to make adjustments during construction. At Circolo in Waldwick, New Jersey, owner George Kalivas opened up a wall so a forklift could deliver the enormous oven he bought from Naples. The oven bakes eight pizzas at a time, and the visual aspect is part of the appeal. “You can see it when you walk in, you see it from the dining room, and from every seat in the restaurant you can see the glow from the wood,” he says. He adds that the oven is next to an open kitchen, making the workflow easy for servers as they make their way into the dining room.

While the oven is a key element in many pizza restaurants, it cannot be the only element. “If you decide you’re building this entire space around the pizza oven, everything else has to be carefully designed,” says Abigail Plonkey, associate principal and director of brand experience design at OZ Architecture in Denver. “It can’t just be hodgepodge.”

Operators must consider details such as seating, where the line forms if the place offers delivery, and whether there are adequate restrooms. It helps to have a cohesive team of operations, design, branding and kitchen consultant involved in the process. “How the brand is experienced in the space, so it feels authentic, is a good way to differentiate yourself from the sea of competition,” Plonkey says.

At T and B Pizza in Boston, which husband-and-wife owners Tim and Bronwyn Wiechmann plan to open in May, the wood-burning oven will reflect the essence of the brand. “My particular angle is very chef driven, food oriented, complex artisanal pizza,” Tim Wiechmann says. “The visual is part of the ethic and stance of our angle.”

In addition to pizza, the menu will have two or three salads, Wiechmann says. That means the kitchen will be small, with no deep fryers, hood or fan. The eatery, located in a former convenience store in the same building as the couple’s German restaurant, Bronwyn, will also have an extensive bar.

Another detail related to the oven is that it has to pass certain tests with local authorities. Erik and Nayda Hutson opened Renzo Wood-Fired Pizza & Natural Wine in Charleston, South Carolina, in 2018. The team met with the fire marshal and the city building inspector to confirm what ventilation and fire suppression would be needed with the wood-fired oven. “Once we got the go-ahead from city officials, we felt confident announcing our plans to the public,” says Erik, also the project’s architect and contractor.

Renzo is located in a historic storefront, itself a key consideration. “Promoting good urbanism and thoughtful neighborhood dining were important goals for us when opening Renzo,” Erik says. “My wife and I live in the neighborhood and really took ourselves to task with creating the sort of space we’d long envisioned as lacking in Charleston.”

Knowing what an area is lacking is a good start in thinking about design. Brent LaCount, principal at Design Collective in Columbus, Ohio, says talking about what you don’t want to be, and what you don’t want the place to look like, can be informative. “What are you trying not to do, what separates you from your competition?” he says. “You really want to call attention to what those differentiating factors are.”

In addition, LaCount says, there are practical matters to consider such as ventilation, gas and electric, and water service. Even ground floor spaces in trendy new mixed-use buildings sometimes do not have the proper connections. “That’s not the most sexy thing to think about when you’re opening a location, but it can very quickly add to capital costs,” he says. “You’d be surprised the number of restaurateurs that get halfway down the road, and certain things about the location are going to affect costs.”

Some things are beyond the pizza operator’s control. Jason McGovern, owner of CRUSH Pizza + Tap in Denver, says when he moved his pizzeria to its current location four years ago, the building was being rehabbed by the landlord. “We were to a certain degree confined or defined by the building,” he says. The landlord added space to the back of the building, so that become the literal back of the house.

The rest of the restaurant is a split level. McGovern decided to locate the dining area in the sunken space and the bar on the elevated space, leading to a patio. “Denver has a lot of sunshine,” he says. “We had the ability to have a
25-seat patio, and we wanted to orient the bar near the patio.”

Sometimes an operator must work with limited, shared space. Vero, which is located in the gourmet marketplace and food hall Denver Central Market, shares space with other foodservice entities. “The benefit is that you can pull the same amount of revenue, in half the amount of space,” says Andrea Frizzi, chef and owner of Vero Pizza.

Frizzi streamlined the space between the back wall, oven, prep table and front counter so the food is delivered quickly. There is additional storage in the basement, but Vero rarely taps into it. “Our purveyors deliver almost daily since everything is fresh out of the kitchen and we’re prepping every day at 6 a.m.,” he says.

Do as much as planning as possible before construction begins. “Take your time, do it right,” says Hewett, from HDG Architecture. “It’s so easy while things are on paper to make sure that your flow is correct. Also understand as you open you’re going to manipulate things.”