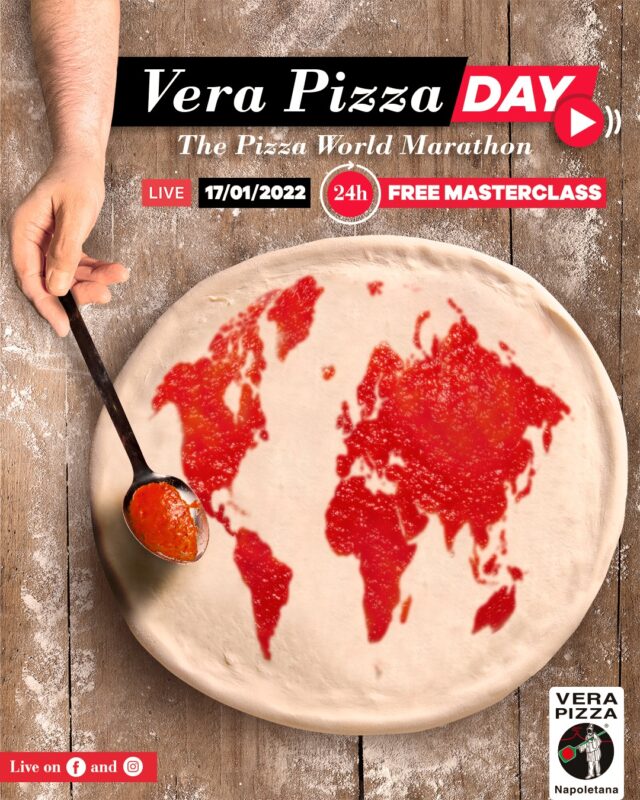 Avpn Presents the “Real Pizza Day”, the Round the World in One Day to Tell the Story of the Most Loved Italian Product

Avpn Presents the “Real Pizza Day”, the Round the World in One Day to Tell the Story of the Most Loved Italian Product

On Monday, January 17th, on the occasion of the feast of Sant’Antuono, AVPN organizes a 24-hour marathon live streaming Facebook and Instagram From Naples to Naples in a path of 22 masterclasses, in 15 countries and in 12 different languages.

During the day, a conference to take stock of the news of the Association.

From “Pizza on the road” to “Pizza Fritta”

The departure is scheduled for Monday 17 January,when the lighting of the fire of Sant’Antuono will take place, at the AVPN headquarters in Capodimonte di Napoli at 00:00 (Italian time) by the board councilor Paolo Surace.

The day, dedicated to the patron saint of pizzaiuoli, will see the start of a 24-hour marathon that will take place through a series of masterclasses. There will be 22 events distributed on all continents, a non-stop to tell one of the most widespread and well-known products in the world.

These are the premises for the second edition of the “Vera Pizza Day”, organized by AVPN, Associazione Verace Pizza Napoletana,which offers a real “journey” on the planet with 15 countries involved in meetings, 12 different languages, including not least a special masterclass in sign language.

The first master class will take place in Australia at 00:30 (Italian time) and then away through Corea, East and West Coast of the United States, Japan, Russia, Egypt, Dubai, La R union,Turkey, Germany, France,Spain, Poland, United Kingdom, Brazil until returning at 15:30 in Italy, for the conference and the assignment of the”Sant’Antuono Awards”,an award sponsored by the Univerde Foundation of  Alfonso Pecoraro Scanio,to those representatives of the world of journalism and media who, over the years, have particularly distinguished themselves in the promotion of the culture of Pizza.

AVPN’s projects and the latest news scheduled for 2022 will also be presented, such as the introduction of rules aimed at Pizza “On the road” and fried pizza, an increasingly iconic product of Made in Italy.

It will then continue with France and Spain and then again the United States, Brazil and Italy, where at 21:30 (Italian time) the pizzaiuolo Antonio Starita flanked by vice president Massimo Di Porzio will deepen the theme of fried pizza with a dedicated masterclass.

The live demonstrations will end in Australia,and then return to Naples for the final greetings.

For those who want to participate and try, following the great pizzaiuoli masters, it will be enough to have half a liter of water, 1 kg of 00 flour, fresh brewer’s yeast, salt, peeled tomato, fiordilatte or mozzarella, extra virgin olive oil, basil and follow the advice of the most important pizza interpreters in the world.

“After the success of the first edition- underlines AVPN President Antonio Pace – we decided to relaunch with an even richer edition than the previous one, with more masterclasses, more countries involved, in many languages, such as Arabic, Korean, Turkish. The “Vera Pizza Day” of 2022 will be a global event that will celebrate what many say is the most loved and most universal food product.”

It will be a special day, like the year that lies ahead, full of events, with the hope that the pandemic situation will soon find a solution. AVPN is ready to resume its journey around the world to promote and disseminate a product that involves millions and millions of fans all over the planet.

The live and masterclasses can be followed in real time by connecting both to the AVPN Facebook Page (www.facebook.com/verapizzanapoletana)but also to the Instagram page (https://www.instagram.com/pizzanapoletanaverace).