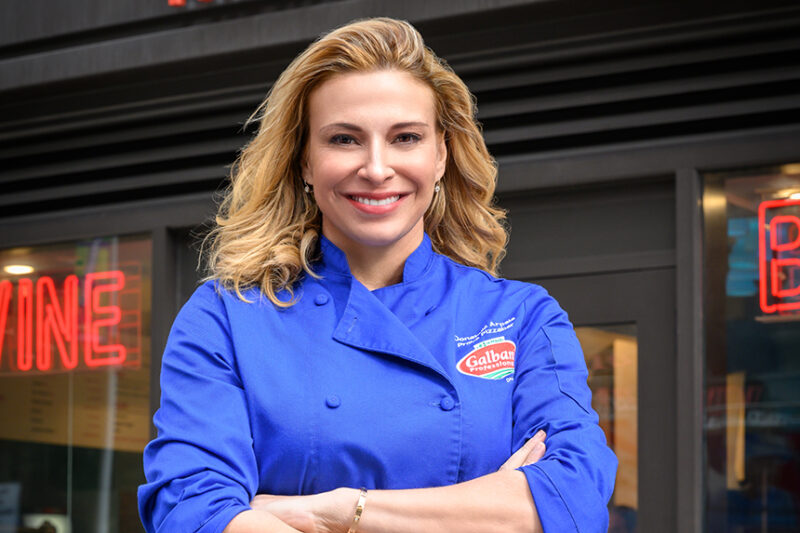 In the past, Pizza Expo keynote speakers have included some big names in business and food. This year is no exception. Donatella Arpaia is a New York attorney, TV personality, restaurateur and pizzeria owner who has become one of the most influential women in the culinary world. Donatella has studied at both the French Culinary Institute and the Italian Culinary Academy.

Arpaia is a trailblazing attorney-turned-culinary mogul whose educational background includes a bachelor’s degree from Fairfield University and a Juris Doctor from St. John’s University School of Law. Donatella studied in Naples under a pizza master, Enzo Cocci. She took what she learned there, considered a modern lifestyle, and drew from her family’s heritage to create what she calls a “perfect hybrid.”

Her father Lello owned an Italian eatery named La Tavernetta in Long Island and helped pioneer Italian fine dining as we know it in New York City. Her father was one of the first restaurateurs of that time to elevate Italian food beyond checkered tablecloths and less-than-authentic dishes. Donatella says her father taught her about the beauty of their heritage and how to put that beauty on display for guests. “My father had an eye for detail, style, and elegance. I brought that special sense of hospitality to my own restaurants.”

Her grandparents had a huge influence on her culinary life as well. She spent her summers as a child with them in Puglia, Italy, where she had her first taste of Neapolitan pizza, which would forever have an impact. “When I think about my summers in Toritto, I think about the scents, the smells, the colors.”

Food has always been in her life and in her blood. Donatella says she was constantly inspired by the immense talent all around her in New York City. “As chefs, we are constantly having to push ourselves. This is a tough business, and you always need to be improving.”

She says in the world of food, New York is always 10 years ahead. “It is a food-lover’s paradise!”

Soon after Donatella’s career as a corporate attorney, she opened her first restaurant, Bellini, in 1998 when she was just 26 years old. She subsequently opened several successful and highly acclaimed restaurants, including David Burke & Donatella, Mia Dona, Anthos, Kefi, EOS and Bistro, Donatella and Provo Pizzabar. David Burke & Donatella received four stars from Forbes, along with the Five Diamond Award. Anthos received a Michelin Star and was named the Best New Restaurant by the James Beard Foundation. Her other accolades include Zagat naming her as “The Hostess with the Mostest”, The New York Post tabbing her as one of the “Most Powerful Women” in Manhattan and Crain’s naming her as one of its “40 under 40.” Her first cookbook, Donatella Cooks: Simple Food made Glamorous, was released in 2010.

Prova Pizzabar serves authentic, healthy, convenient and — most importantly to Donatella —delicious pizza. “We get ancient grains to make our flour. We let our dough rise two to three days. Our well-hydrated dough is strong to hold hearty toppings, but still very light. The menu is filled with Italian appetizers, pastas and deserts that will make you think that you’re in Italy.”

I like to think that attending Pizza Expo will be one of, if not the best, investments of time and money that you’ll make. The bottom line is there’s always something new at Pizza Expo that can improve your restaurant. Remember, attending Pizza Expo is a tax-deductible working vacation. For more information on attending International Pizza Expo 2022, please visit PizzaExpo.com.

It’s all pizza and it’s all for YOU!