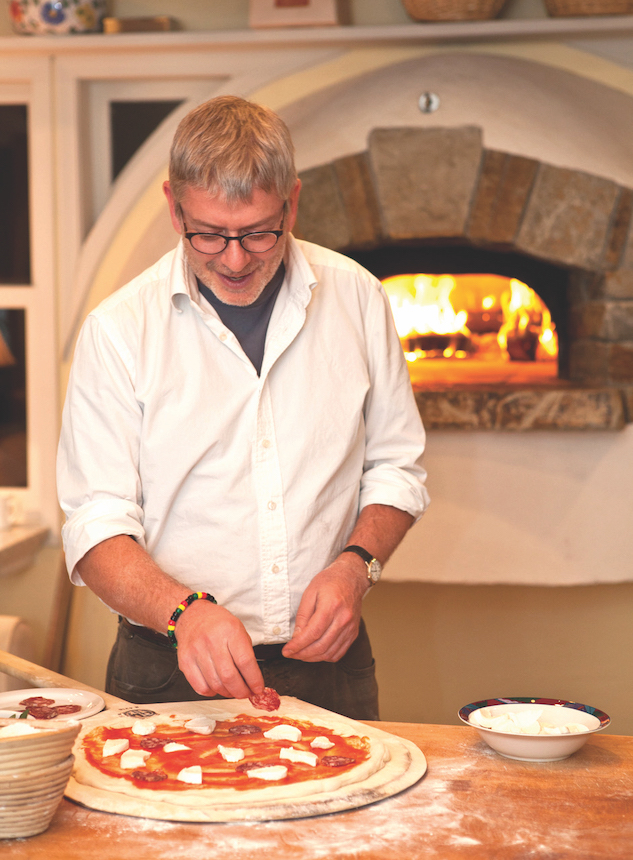 After a 20-year career in the tech industry, Ken Forkish decided to leave the corporate world and become a baker. He relocated to Portland, Oregon, and opened Ken’s Artisan Bakery in 2001. Ken’s Artisan Pizza opened five years later in 2006. He authored his first book, Flour Water Salt Yeast: The Fundamentals of Artisan Bread and Pizza in 2012, which won prestigious awards from James Beard and the International Association of Culinary Professionals. His second book, The Elements of Pizza, is a cookbook for anyone who loves pizza — particularly pizza aficionados who have a real appreciation for the crust. He also previously owned Checkerboard Pizza, a NY-style pizza and slice shop that he recently sold.

Unfortunately, during the pandemic Forkish had to close them all down, although Ken’s Artisan Bakery continued to offer takeout for 16 months. He told his patrons and employees that it was temporary and that he would be back when it was safe to do so. He now only runs the two businesses that share his name: Ken’s Artisan Bakery and Ken’s Artisan Pizza.

Ken’s Artisan Pizza, which was grossing more than $1.5 million annually prior to the pandemic, began as an offshoot of the bakery that is located just a few blocks away. His chef and business partner, Alan Maniscalco, started making pizzas out of the bread oven on Monday nights. They called it ‘Monday Night Pizza’ and it’s still going on at the bakery. It went over so well that they decided to open a pizzeria.

With just 60 seats and an extra 16 outside, Ken’s has become a destination for locals and tourists. And much of their success is a result of their high-temperature pizza oven, which is a focal point of the restaurant design and experience. The 800 F oven can bake four to six 12-inch pizzas at a time in two minutes — upwards of 60 an hour. Pizza sales accounts for 40 to 50 percent of their total revenue each day.

The menu is inspired by the pizza Ken enjoyed during visits to Italy and Europe. Baked in the intense heat of a wood-fired oven, his pizzas feature blistered crusts and are topped with the finest ingredients Forkish can source. In addition to great pizza, they offer a variety of fresh salads and starters featuring local, seasonal produce delivered by a network of local farmers. The restaurant also offers four beers on tap, and a 100-bottle wine list featuring local wines.

All dough, signature sauce and deserts are made in-house, and even the sausage is ground on premise. Ken’s typically employs around 20 people, and most of the kitchen staff is cross-trained on at least two of the three stations. With so much being done in-house, keeping a handle on food and labor costs is imperative.

Operating in a “foodie” town is challenging. There’s pressure to keep up not only in the pizza industry but against other restaurant concepts that seem to be opening on a weekly basis in Portland. Ken will bring to his keynote an undeniable passion for pizza and baking, knowledge of the craft and tales of his successes.

I like to think that attending Pizza Expo will be one of, if not the best, investments of time and money that you’ll make. The bottom line is there’s always something new at Pizza Expo that can improve your restaurant. Remember, attending Pizza Expo is a tax-deductible working vacation. For more information on attending International Pizza Expo 2022, please visit PizzaExpo.com.

It’s all pizza and it’s all for YOU!