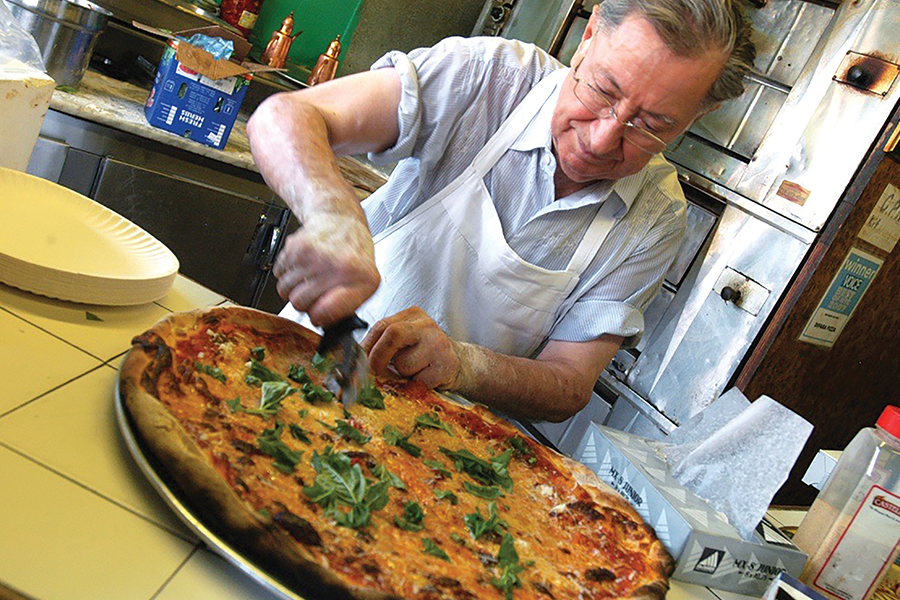 Man on the Street: In Memory of Dom Demarco

Man on the Street: In Memory of Dom Demarco

In March 17, 2022, we lost a true legend. Domenico DeMarco was the co-founder and head pizza maker of Di Fara Pizza in Brooklyn. Dom inspired a generation of pizza makers and elevated, maybe even saved, the New York slice.

Visiting Di Fara wasn’t just about the food, it was about the experience. I’ll never forget my first time. We made the hour-long trek from Hoboken, New Jersey, into the center of Brooklyn, where we found a small storefront on the corner of Ave. J and E. 15th Street. The windows dripped with condensation because it was so packed inside. We elbowed our way through the crowd and found the counter, behind which stood Dom DeMarco.

Everyone in the room watched him intently. Dom’s motions were thoughtfully slow, soaked with intention. He moved at his own pace, which seemed to sync with the Italian opera emanating from a small cassette player in the corner. His back turned to the audience, Dom appeared to ignore the crowd of hungry customers behind him so that he could focus on the pizza.

His inefficient process played into Dom’s performance. He sliced cheese directly onto the sauced dough. When he was using buffalo mozzarella, Dom would cut open the bag (imported from his native Caserta, of course) and let the brine slosh into a bucket before applying chunks of cheese onto the dough. When someone ordered a topping, he’d have one of his kids prep it in the back and bring it out on a small platter. Placing the pie into his oven required him to stand on a case of tomato cans. To turn or remove a pizza, he’d often stick his hand directly inside the oven.

After pulling a pie, Dom let it settle as he shuffled across the room to grate some Grana Padano cheese, which he’d cart all the way back to the bubbling pizza. Next was his most famous move, snipping fresh basil directly from a bouquet onto the pie. Finally, a swirl or two of olive oil. This final move triggered oooohs and aaaahs from the audience, inspiring him to add a bonus drizzle or two for good measure.

As all this happened, everyone in the room anxiously waited to find out whose hunger would be quenched. Just as Dom repositioned a stray snip of basil, he’d look up and make eye contact with the lucky recipient – the first real acknowledgement of the audience. All you could do was thank him, even after hours of torture. Dom changed ingredients and tweaked his methods constantly. Every other pizzeria in New York repeated their routine every day. They followed the procedures taught to them by their predecessors without question. They didn’t change anything unless it was to save a couple cents. That’s why so many slice shops fell into a trance and went out of business. In the late 2000s, pizzerias offering $1 slices knocked out the mediocre spots and threatened to take over the city. Dom’s pie evolved over time into the symphony it is today and essentially saved the New York slice.

For the first few decades after opening, Dom made typical New York-style pizza. It only became what we know and love today because Dom wasn’t interested in merely maintaining — he wanted to evolve. By doing so, he gave other pizza makers a license to do the same. He proved that there’s value in the details and that people will wait for quality. The man may be gone, but his memory will survive as long as there are pizza makers looking to improve. Every snip of basil, every handful of Grana Padano, and every swirl of post-bake olive oil will be a reminder of Domenico DeMarco.