Cooking with wood has been around since the dawn of civilization, so there’s no singular revelation attached to that method of cooking. On the other hand, cooking pizza in a wood-fired oven has been going on only since the turn of the century in this country. In recent years, however, the fire has been banked and stoked until it is blazing hot, as more and more new pizza places (no fewer than ten new restaurants in Chicago in the past five years have gone with wood-fired ovens) continue to embrace the idea of cooking with wood, and promoting the authentic goodness attached to the idea of a wood-fired pizza.

A wood-fired oven is not for everybody, but those that decide to take that route — and it seems as if there are more and more every day — are dedicated to the wood-fired oven and champion the idea that this is an excellent and classic way to bake pizza.

Most of us in the business are familiar with the cooking characteristics of a wood-burning oven as it pertains to pizza, but there are so many other cooking possibilities to consider once the fi re in that oven is blazing. Yes, the wood-burning oven can be used to cook almost anything, but I am quick to point out the many considerations that have to be addressed. A famous movie star once said, “If you throw something into a hot oven, what’s to stop it from getting cooked?” There’s a good bit of truth in that statement, but there’s also a lot of danger in taking it too much to heart.

For example, how big is the oven, how much will it hold? A true Neapolitan wood-fired oven is generally quite small and will hold (depending on the size of the pizzas being baked) only four or five pizzas, so this leaves little room to cook anything else. This means we have to look at how to use the oven
when the oven isn’t being used. By that I mean using the oven when the oven is hot, but there are not too many pizza orders coming in.

Let me explain this in more detail. You fi re up the oven, and your goal is to get the oven to, say, 800 F, the temperature that allows you to bang out a baked pizza every 90 seconds or so. However, as the oven temperature is rising, why waste the heat? So at temperatures of, say, 400-450 F, the possibilities of prepping any number of foods is right there in front of you. Prepping pizza toppings such as eggplant, bell peppers, onion, mushrooms, roasted tomatoes, sausage and chicken. In other words, using the oven and the flavor that comes from cooking with wood to full advantage. (And while I think of it, throw the words “al forno” around a lot, it goes a long way to stimulate the appetite of your customers.)

I made that sound real easy, but doing this takes attention to the cooking process. And there is more, relative to the size of the oven. For example, if the oven cavity is big enough you can put a Tuscan grill grate in it to cook a classic bistecca fi orentina (T-bone or porterhouse steak brushed with Evoo and grilled to a turn). On that same grate you can cook a whole small chicken (partially deboned and flattened; a version of pollo al mattone or chicken under a brick). 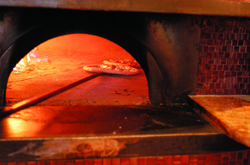 Yes, it’s all relative to oven size as to how much you can do with that woodburning oven. Several side dishes, for example, can be made in a wood-burning oven. An outstanding Italian mac ‘n’ cheese baked in a terracotta casserole. A casserole of white beans baked in a terracotta pot (combine cooked cannellini beans with crushed garlic, olive oil, onion, crushed red pepper fl akes, chicken broth). Fresh potatoes thinly sliced and tossed with olive oil and black pepper are spread on a sheet pan and baked in the oven. Delicious.

Here are a few ideas and techniques for putting your wood-burning oven to maximum use:

? Eggplant. Wash and stem the eggplant, but do not peel. Slice into thick round “steaks”. Put the eggplant rounds on a sheet pan, brush both sides with olive oil. Roast in the oven (temperature should be around 400-450 F). Turn the slices once.nCook time should be around 20 minutes. Use for eggplant parmigiana or cut into cubes for a pizza topping.

? Bell Peppers. Wash, stem and seed the pepper. Cut in half. Push down hard with your hand to fl atten each half. Brush with olive oil. Roast the peppers until the skin blisters and chars. Put the peppers in a big metal bowl and cover tightly with foil or plastic wrap. Let sit for 30 minutes. This steaming process makes it easy to remove the charred skin. Cut or chop as needed to use on pizza or in pasta or antipasti.

? Plum or Roma tomatoes. Wash the tomatoes. Cut in half lengthwise. Arrange the tomatoes, cut side up, on a sheet pan (line the pan with parchment for easy clean up). Drizzle the tomatoes with olive oil. Sprinkle on some fresh herbs (basil, for example) or dried herbs (oregano). Roast in the oven (a slow roast works best, so the early fi re of the oven at around 300 F is ideal). Roast until the tomatoes just start to shrivel a bit. Use on pizza (“slowroasted fresh tomato topping”), on an antipasti, or a pasta dish with fresh basil and grated Parmesan.

And one of my favorites out of a wood-fi red oven is a giambotta, which is a combination of chunks of Italian sausage roasted with bell peppers, onions, potatoes and olive oil. Throw in some of those roasted eggplant and roasted tomatoes for good measure. Bake it in the oven. Served with a shower of grated Romano cheese. Outstanding. Fire up that oven and use it in every possible way.

Pat Bruno is Pizza Today’s resident chef and a regular contributor. He is the former owner and operator of a prominent Italian cooking school in Chicago and is a food critic for the Chicago Sun-Times.