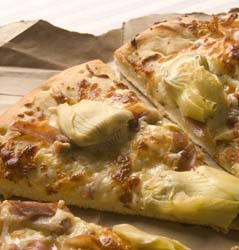 Artichokes: All Choked Up

Artichokes: All Choked Up

Sure, pepperoni, onions and mushrooms will always be beloved pizza toppings. But as patrons’ palates evolve, so does their desire for trendy toppings. Filling this of-the-moment-ingredient spot is the artichoke. The artichoke is a member of the thistle or sunflower family. While it is a formidable plant to tackle, the edible “heart” provides a nutty, slightly bitter flavor to the dishes it adorns. It also elevates a dish’s status from ordinary to upscale. Since artichoke cultivation is concentrated mainly in Italy, Spain and France (California provides nearly 100 percent of the U.S. crop), artichokes are considered a specialty ingredient — and operators can price them as such.

Quartered artichoke hearts are the least expensive; whole artichoke hearts are the most expensive. “The product is fully sterilized. Once opened, just drain and refrigerate,” says Veshi, who recommends using open product within two to three days. The shelf life of unopened canned product is three years. Canned artichokes are preserved in citric acid and salt, so Veshi encourages gently rinsing the product so it does not alter the flavor of its intended dish. When using quarters, however, operators must practice caution since the delicate product could fall apart.

“It’s a very versatile product,” says Veshi. “You can roast it, grill it, and stuff it. The list goes on.” Artichokes also take well to sautéing, frying, steaming or marinating. They can be served cold in salads or antipasti, or blended into hot dips or hummus. They are also suited for appetizers: Quarters can be battered and deep-fried; hearts can be stuffed with crabmeat, garlic, cheese and breadcrumbs.

“We use artichokes several places on our menus,” says Marc Baltes, executive chef of the four-unit Pi Pizzeria based in St. Louis, Missouri. The antipasti appetizer displays prosciutto, salami, Parmesan, Asiago, green and kalamata olives and artichoke hearts. The Euclidean salad is built with romaine, artichoke hearts, olives, red peppers, feta and Greek yogurt dressing. While the Bucktown pizza layers mozzarella, roasted chicken, artichoke hearts, red bell peppers, green olives, red onions, feta and sun-dried tomatoes. “We use marinated, quartered artichokes. They are great on salads, and have the flavor I associate with ‘pizzeria.’ I’ve used fresh artichokes over the years, but for this pizza, these are the right artichokes,” says Baltes. “They are ready to eat, straight from the jar. We drain them and chop them rough for pizza toppings, but eat them as is for the other applications.”

About 20 percent of the customers at Willy O’s Pizza & Grill in South Haven, Michigan, order the spinach and artichoke dip appetizer on a regular basis. “It’s very popular,” says chef William Olund, who also uses artichokes as a pizza topper and in pizza sauce, upon request.

“To prepare the artichokes we cut the hearts into halves or thirds, (depending on size), and bring them to a boil for one minute,” says Olund, who uses canned, quartered hearts packed in water. Trial-and-error led to the decision to use canned product. “Frozen falls apart and has an unappealing texture. Fresh are more expensive, require more prep time and quality varies throughout the year. Bottled is usually pickled and/or seasoned, which changed our dish’s flavor. Artichokes canned in water works best. They are picked and packed during peak season, and we get consistent quality,” continues Olund. He estimates that the average food cost for an artichoke is $.90 on a 14-inch pizza or $.48 per serving of dip.

Carolyn Redendo, owner of Redendo’s Pizzeria & Pasta in Fountain Hills, Arizona and Redendo’s Pizzeria Ristorante in Scottsdale, Arizona, calls artichokes a great menu additive. She sautés chopped artichokes, sour cream, finely shredded Monterey Jack and pepper together and serves it as a bruschetta topping. In addition, artichokes appear on pizzas, and on her antipasta salad (made with tomatoes, mozzarella, pepperoni, and pecorino on romaine dressed in balsamic vinaigrette). When working with artichokes, Redendo discourages pairing artichokes with other salty items. “It does release a bit of liquid, so spread it more evenly and drain it well prior to placing it on pizza,” she adds. Due to the large quantities of artichokes she goes through, Redendo prefers using canned. She estimates her food cost for artichokes is 26 percent, but more like 20 percent for the bruschetta.

“Artichokes provide a great way to add a more diverse item to your menu that is often overlooked,” Redendo says.

Prepare baby artichokes by rinsing under cold running water. Cut off top 1/3 of petals and cut off stems. Snap off leaves, about 3 leaves at a time. Make a quarter turn and continue to snap, working around until pale yellow leaves remain at center. Cut artichokes in half.

Spread baby artichoke mixture evenly over crust. Sprinkle with cheeses. Bake until cheeses are melted and lightly browned, about 5 to 8 minutes.