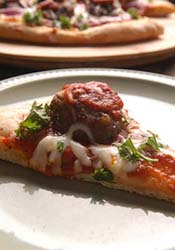 Meatballs, which have been around for hundreds of years and were once considered peasant goods, have gone mainstream. In fact, one Chicago restaurateur has opened a restaurant called “The Ball Room.” Yes, meatballs of various style (and shape) served every which way are the mainstays of the menu.

Of course there are many suppliers jumping to sell you ready-made meatballs, so you should sample those out to see which works best for you. On the other hand, I’m offering two basic recipes for making meatballs in-house. The first recipe, “Mamma’s Magnificent Meatballs,” is a big batch deal. But once made and cooked, they can be frozen and kept for later use. The second recipe is similar in style, but it is more or less a test recipe so that you can get the hang of the process.

Just to keep the ball rolling, I am giving you a couple of tweaks that will allow you to offer something a bit different — lamb meatballs and turkey meatballs. The best way to market your meatball pizza is to draw attention to it. Come up with a clever slogan like “We are having a ball!” (groan) or “Try one of our specialty meatball pizzas.” You can also play up the idea that a turkey meatball pizza would be a healthier option. Let’s get rolling.

Combine all the ingredients in the order listed. Mix by hand thoroughly.

Form the meatballs — a bit larger than a golf ball — by rolling the meat between the palms of your hand.

Lay a thin film of vegetable oil in a large skillet. Sauté the meatballs over medium-high heat in batches until they are cooked through, turning them frequently to brown evenly.

Once cooled, the meatballs can be used at once or frozen for later use

Cook’s Notes: Vary the size of the meatballs for the application — sandwich, pizza, spaghetti and meatballs. The meatballs can be baked in the oven (450 F) instead of sautéed. Set a pizza screen on top of a pizza pan. Spray the screen with vegetable oil. Arrange the meatballs on the screen and bake until cooked through. Cooking time will vary relative to the type of oven being used.

Yield: 18 meatballs, each about 2 inches in diameter

In a large mixing bowl, combine the pork and beef. In another bowl, soak the bread in the milk until it is saturated. Squeeze the bread and drain off excessive milk. Tear the bread into small pieces and add it to the meat. Add the remaining ingredients. Mix thoroughly and form into meatballs.

Arrange the meatballs on a sheet pan fitted out with a drain tray (or use a spray-coated pizza screen). Bake the meatballs until cooked through. Set aside. (Can be prepped ahead and held, covered, refrigerated, for up to four days. Or frozen.)

Now, on to the meatball pizza. Take note of these suggestions:

Do not try to use a large meatball. The crust may not carry the weight, and your food costs will be too much to deal with.

You can use smaller meatballs as they are but, again, don’t load the crust down.

A better option is to slice the meatballs in half horizontally. Put the flat side of the meatball down, the domed side up.

Another option is to slice the meatballs (the larger size) into “coins” and use those on the pizza in the same manner as, say, pepperoni.

How many meatballs to use is relative to the pizza size. Use common sense. Not too many, not too little.

Turkey meatballs. In the “Basic Meatball” recipe, replace the pork AND the beef with ground lean turkey, and add 1 teaspoon ground or crushed fennel seeds to the recipe.

Great Balls of Fire. Spice up a meatball pizza by adding cayenne pepper, to taste, to the basic meatball recipe. If you take this route, after mixing all the ingredients, test fry some of the meat and adjust the spicy-heat accordingly.

Pat Bruno is Pizza Today’s resident chef and a regular contributor. He is the former owner and operator of a prominent Italian cooking school in Chicago and is a food critic for the Chicago Sun-Times.