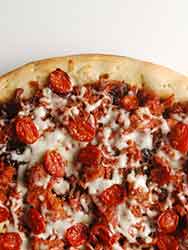 Talk about being ahead of its time — Pete & Sam’s Restaurant in Memphis, Tennessee discovered the wonders of slow-cooked pork shoulder on pizza back in the early 1950s. Today, its Bar B Q Pizza boasts a cult following, including blogger-sensation Hungry Girl, who sang its praises on The Food Network’s “The Best Thing I Ever Ate.”

“We make or cook everything in house,” says Sam Bomarito Jr.,
co-owner of this 350-seat Italian restaurant. The Bar B Q Pizza stars house-made tomato sauce, cheddar, mozzarella and slow-cooked pork shoulder tossed in house-made sweet barbecue sauce. Bomarito seasons a seven- or eight-pound bone-in Boston butt with a proprietary dry rub. He smokes it over hickory and apple wood for 16 hours at 230 F. He then debones, defats and chops the melt-in-your-mouth meat. The restaurant goes through 220 pounds of pork butt a week, with 98 percent of the yield serving this pizza. He explains that 100 pounds of pork butt yields 60 pounds of useable meat. He charges $14 for 12-inch pizzas and runs a food cost of 25 to 28 percent. “Once we cook it, we break it down and immediately refrigerate it. We cook pork every few days because we go through it so quickly,” says Bomarito.

And although convenience pork products abound — those that have been salted, braised, pulled, smoked or cured — Pizza Today is seeing a trend in craftsmanship. Operators are curing pork shoulders in their walk-ins. They’re smoking meats. They’re grinding their own sausages. Food cost may be a factor, but labor cost certainly counters that. Indeed, the driver seems to be passion.

At Diavola Restaurant in Geyserville, California, chef/owner Dino Bugica smokes fresh pork belly and features it on a pizza called Cha Cha Cha. Pork belly, above all other pork products, has raised its profile, with chefs touting its contrast of textures and rich, full-fat flavor. For this pizza, Bugica dry rubs Duroc pork belly and lets it rest for a day. He then smokes it over cherry and mesquite wood for five hours at 200 F and slices it like bacon, but a little thicker. He then cubes it. The thin-crust pizza sees house-made red sauce (San Marzano tomatoes and basil), a little shredded mozzarella, local goat cheese, raw frigitello peppers (local green bell pepper) and roasted red pepper. The pork belly goes over top, along with green onion and Calabrian oregano, and then the pizza is roasted in the wood-fired oven until crisp.

“The tanginess of the goat cheese with the sweet roasted pepper and the smoky, fatty pork belly make perfect sense,” says Bugica. “The Duroc pork has a good amount of meat, so it’s not too fatty. Not a lot renders off.” He charges $16 for a 12-inch pie and runs a food cost of $1.75. “Pork belly is $3 to $4 a pound, and we use about three ounces on a pizza.” When storing the pork belly, he Cryovacs it, then keeps it in the walk-in for about a week.

Pork also stars in the Sonja Pizza at 60-seat Diavola. A red base gets a light sprinkling of mozzarella and then diced heirloom tomatoes go over top. Once the pizza is pulled from the oven, Bugica adds dollops of mascarpone that melt out a bit from the heat of the pizza. Shavings of prosciutto di Parma and wild, local arugula finish the picture. He charges $16.25 for a 12-inch pie and runs a food cost of $2. “The prosciutto is wonderful — salty, sweet,” he says. “It’s a great pork product.”

Combine the hoisin, barbecue sauce, ketchup, garlic, ginger, soy sauce and olive oil. Toss with the spareribs; grill or roast at 400 F, until completely cooked and tender, about an hour. Shred meat into small chunks.

Slice tomatoes in half; toss with garlic, olive oil and salt and pepper. Place on baking sheet; roast for 90 minutes at 275 F, or until they shrivel.

Melt the butter in a large sauté pan. Add onions, brown sugar; season with salt and pepper. Sauté over medium-low heat until the onions are a deep golden brown, about 30 minutes. Add apple cider, dry sherry and sherry-wine vinegar; cook another 10 minutes.

On pizza dough, lay down caramelized onions, then pork, then cheese, then tomatoes. Bake until golden brown in a very hot oven.

Katie Ayoub is a frequent contributor to Pizza Today. She lives in Naperville, Illinois.