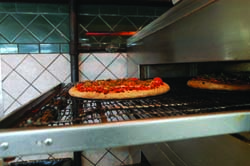 Q: On the busiest Friday night ever our pizza oven died. It became completely inoperable. We lost tons of business and many of our customers left disappointed and probably visited our competition to get their pizza that night. We are trying to figure out a good way to solve this problem. Any suggestions?

A: I’m a recovering pizzeria owner. My place was so far from civilization I had to create backup plans for all kinds of contingencies. Since your oven, mixer, refrigeration and telephones are absolutely vital to keep cash flow and customer satisfaction high, pre-planning for breakdowns is crucial. Knowing that things eventually break, I purchased backup repair items. If I were you, I would buy and stock the parts that most often fail in an oven.

If you have a conveyor you may want to stock a drive motor, speed servo, chain belt repair kit, a few specialized electrical switches, fuses and any other items the manufacturer or repair service company recommends. Decks are much simpler. A pilot safety (every two years), thermostat, (every five years) and door opening assist springs (every ten years) are all you’ll need. Let’s not forget walk-in refrigerators. My town just went through a power outage. Half the businesses had power, the other half didn’t. If your location suffers through storms on a regular basis, I strongly recommend a backup generator. The propane models are my favorite. You don’t have to babysit the gas tanks and keep on refilling them every few hours. If you need gas to keep the generator running, how are you going to get topped off at the gas station that is out of power? Buy the biggest generator you can afford. It will pay for itself after it saves all of your refrigerated food from the dumpster and keeps your doors open.

My biggest refrigeration problem was compressor failure. This only happened on the hottest weekend of the summer, when my repair man was at the lake and not answering his phone. I just hate being on a Food Death Watch, insurance or not. That’s why I eventually had a walk-in cooler built from scratch. With the exception of the heavy duty door, everything was custom made. My carpenter fabricated it for the same money as factory made. The real difference was I had redundancy in the cooling systems. Instead of the single, just barely big enough compressor and evaporator, I had two installed –– one at each end of the 20 foot box. Either one of them could cool to 35 degrees in a perfect ambient temperature and humidity.

The chances of both of them going down at the same time were pretty slim. Each compressor worked half as hard as it was engineered for, thus extending the life cycle and reducing electricity costs. I also had the compressor motors wired to a cheap programmable time clock. During the hot, humid days and nights of summer my evaporator coils often frosted over, eliminating cold air circulation and raising the internal temp of the cooler. I programmed the timers to cut the juice to the compressors in the middle of the night and let the coils blow dry. I did this one compressor at a time.

An easy way to see behind the coils and look for frost build up is to buy a large press and stick mirror and position it so you can have ‘eyes’ behind the unit. Don’t trust the thermometer near the door of the box. Buy a large outside home-style one and screw it to the walk-in’s interior wall. Make sure it’s right in your face as you walk in. It will be a well spent $9.

Big Dave Ostrander owned a highly successful independent pizzeria before becoming a consultant, speaker and internationally sought-after trainer. He is a monthly contributor to Pizza Today.