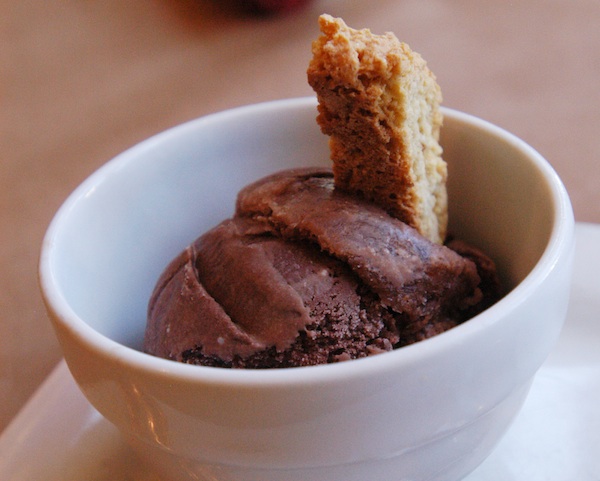 Make this summer sweet with gelato

Gelato –– that dense, creamy, wonderful Italian frozen dessert –– is not the exotic, foreign entity it once was. But although it has found its way onto restaurant menus across the country, it still offers menu distinction to operators. Flavors are limited only by imagination and range from the familiar chocolate and vanilla to the unique goat cheese-cashew caramel and apple cider. But, why consider gelato over ice cream, which has deeper roots with American consumers? For Italian restaurants and pizzerias, gelato offers a sweeter inroad to an authentic Italian experience. And today’s customers long for authentic experience and sense of artisanship. Extracted with a spatula instead of a scoop, gelato is often displayed in a case. It doesn’t sit, packed tightly into tubs, like its American counterpart. Rather, it stretches out in peaks and valleys, swirls and swoops and beckons with its dense creaminess. One marketing upside to gelato over ice cream is that it contains significantly less butterfat than ordinary ice cream (20 percent versus four to eight percent). And because gelato is churned more slowly, it has less air whipped into it, so it results in a denser and more intense product. Once the decision to carry gelato on dessert menus is made, operators must weigh the pros and cons of making it in house versus ordering it from a supplier.

At Joe Jo’s Pizza and Gelato in Ephraim, Wisconsin, location drove the decision to make gelato in house. Tucked away in Door County, the closest distributor is 70 miles away. “Although it was a big financial investment with the equipment, and it takes a big chunk of time to make, it’s worth it for us,” says Dick Luther, who co-owns this 90-seat pizzeria with his wife. They showcase 18 rotating flavors of gelato in a display case. “Our customers know that the gelato here is homemade,” he says. “It goes along with our homemade Cheese Merch pizzas and is an important distinction for our business. And it tastes wonderful. Because there’s less fat, flavors really come through. You’re not coating your taste buds with fat, so it’s a more intense experience.”

On Mondays, he and his wife typically make 25 batches that fill 10-pound containers. At wholesale, Luther says 10 pounds of gelato would cost $35. “We’re more than doubling our money on it,” he says, running a food cost of 20 percent. But making it takes up their whole Monday, starting at 8 a.m. and finishing at about 5 p.m. Stir-ins take the most time — adding marshmallow and chocolate chunks to the rocky road gelato, for instance. Luther and his wife took a gelato-making class before launching the business in May 2007. “I highly recommend taking a class! It can be challenging at first to get the formula and technique down,” he says. “They also guided us on pricing, so we could be profitable.”

Gelato makes up at least 10 percent of Joe Jo’s business (and in the summer, it’s at least 15 percent). It took the business three years to recoup the initial investment in gelato-making equipment, display case and supplies.

American Pie Pizzeria, Gelato and Juice Bar in Bridgehampton, New York, sources its gelato from a regional supplier. “Our main focus is pizza. Gelato is an accessory for us,” says Raj Sainani, owner of this casual 16-seat, 16-stand pizzeria. His display case shows off 12 flavors, all brought in from a dessert company in Fairview, New Jersey. Popular flavors range from mint chip (for the kids), caffe Bianco and tiramisu. He sells one scoop for $2.99 (additional scoops $1.99 each), a pint for $8.99 and a quart for $15.99. Sainani runs a 17 percent food cost. “The hardest thing to manage is the temperature,” he says. “If you don’t manage it well, you get freezer burn on the gelato and have to throw it out.”

Black Dog Gelato is a gourmet gelateria with two retail locations in Chicago. Apart from walk-in customers, chef/owner Jessica Oloroso also sells to more than 30 foodservice accounts, including the famed Girl & the Goat restaurant and The Drake hotel. Known for quality gelato and unusual flavor combinations, she says that gelato gives restaurant operators a unique, quality product that the operator down the street doesn’t have. “By sourcing out, it’s like having an offsite pastry chef and gives you a product that has an in-house feel,” she says. Operators can choose from a vast array of flavors, such as malted vanilla or Mexican hot chocolate. Or she can create customized flavors. For instance, to pair with a chocolate cake at Girl and the Goat, she made a shiitake mushroom gelato (shiitakes, brown sugar, vanilla bean, cocoa nibs, butter).

She sells Black Dog’s gelato for one base price and says that, depending on serving size, one gallon will yield between 20 and 30 servings. The food cost, she says, is “well under $1 a serving.” To maintain the integrity of gelato, Oloroso recommends operators order small batches and have them delivered two to three times a week. “That way, your gelato will taste creamy with all of the bright flavors in tact.”

In a large saucepan, combine half the milk with egg yolks and sugar.

Cook over very low heat until mixture sticks to the metal utensil, whisking continually. Add the chocolate, stirring until melted. Remove from heat; gradually mix in the remaining milk and vanilla extract. Cover; chill overnight or place the saucepan

in an ice bath until completely chilled. Freeze in a 5-quart ice cream maker according to manufacturer’s directions.