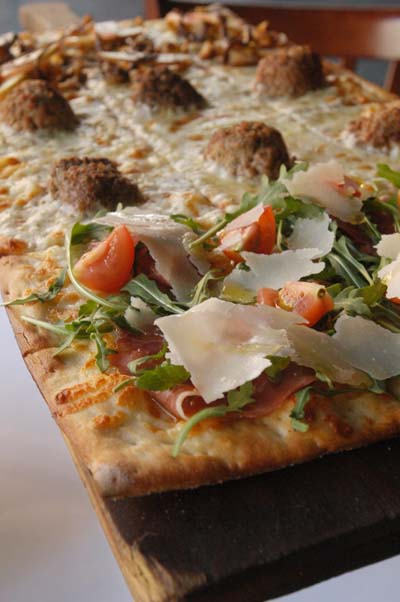 Since this is a more traditional style of pizza, there won’t be any sugar, milk or eggs in the dough, just the basic ingredients –– flour, salt, yeast, oil and water –– and in this case, we could even say that the oil is an optional ingredient as it really won’t have much (if any) impact when used at normal levels of 1 to 3 percent of the flour weight.

Coal/wood fired oven. When making artisan pizzas, these ovens are typically operating at 600 to 800 F resulting in a baking time of right around 2 minutes or a little less. Because of the very short baking time there is little opportunity for the top of the pizza to dry off, so care must be exercised to limit the amount of vegetable toppings used. The high oven temperature will result in very good oven spring of the dough so it will have a nice, light and open structured edge on the crust, much like that of an English muffin. The bottom of the crust will be well browned with a fair amount of charring. The raised edge will be spotted with charred spots as well as browned or even charred bubbles. All of this adds to the character of the finished pizza flavor and texture. This might not be the best pizza for a buffet or delivery/carryout operation as the crust will not maintain its crisp for a very long time, but the flavor is great, so for dine-in, it is hard to beat, and the oven adds a lot of ambiance to the dining experience.

Deck oven. When baked in a deck oven at 550 to 600 F, our artisan pizza would require closer to 3½ to 4 minutes to bake (assuming a deck bake), and a lot of the physical characteristics of the baked pizza would be very similar, though possibly not quite as dominant, as those achieved from baking in the coal/wood fired oven. One of the main differences that I’ve seen in comparing these two types of ovens is that the coal/wood fired oven will typically exhibit top heat/baking properties over the average deck oven, so the char on the top of the crust is generally not as intense. The cell structure porosity, eating characteristics and flavor are all very comparable, though. Due to the longer baking time required in the deck oven, the bottom of the crust will typically have a somewhat thicker, browned area resulting in a finished crust/pizza that tends to maintain its crispiness for a slightly longer time, possibly making for a pizza better suited to a buffet or carryout/delivery operation. While some of these ovens are available with a brick front to give the oven a great rustic appearance, they generally don’t provide quite the ambiance of the coal/wood-fired ovens.

Conveyor ovens. Conveyor ovens (using air impingement technology) are the true work horse of today’s retail pizza industry. The most recent technology innovations in these ovens has improved the baking and operating efficiencies by a significant margin over older models, and when combined with advances in baking platforms (disks) we now have conveyor ovens fully capable of replicating many of the hearth baked pizza characteristics achieved previously only with a deck or coal/wood fired oven. With the new generation of air impingement ovens operating at temperatures between 475 and 515 F, with a baking time of approximately 4½ minutes, and using a baking disk specifically designed for the application, our artisan pizza can come from the oven with a fair amount of char on the bottom, but without the hard “pizza bone” outer edge characteristics commonly found on pizzas baked on different platforms.

Since the top bake is fully controlled on these ovens, we can achieve at least some char on the top of the crust too, giving the finished crust a lot of the visual characteristics, as well as essentially the same, open porous, internal crumb structure characteristics as pizzas baked in most deck ovens, and some coal/wood fired ovens. As an added benefit, the airflow to the top of the pizzas has a drying effect upon the pizza, providing for a drier pizza, especially when heavily topped with moisture-laden vegetables. These ovens are well suited to buffet as well as carryout/ delivery pizzas or any operation where oven ambiance is not a prime focus.

Multiple technology ovens. These ovens bake through the application of multiple baking technologies, such as air impingement, convection, conduction, radiation (infrared) and, to some extent, magnetic resonance (similar to micro waves). The idea behind the application of these combined heating technologies is to utilize their individual, unique heating properties to achieve a faster, more thorough bake. While some of these ovens have demonstrated their ability to bake our artisan pizza very similarly to a deck oven –– with a good, solid bottom bake, some char, and a well baked top –– others provide a solid bake, but without the unique char spots on the bottom and spotty charring on the top. The internal crumb characteristics are generally quite good and are characterized by an open, porous crumb structure and crispy bottom characteristics that hold up quite well, making them well-suited to buffet and carryout/delivery stores where oven ambiance is not of prime concern.

Our example of an artisan pizza, when baked in any of the above mentioned ovens which has been properly set up to achieve a hearth style bake, will provide a finished pizza with comparable internal quality characteristics such as an open, porous crumb structure, crispy eating properties when fresh from the oven, and an attractive overall appearing finished pizza. Where the differences primarily appear are in terms of the thickness of the bottom crust bake and the amount of bake char present on both the top and bottom of the crust, which can and will affect the flavor profile of the finished pizza as well as the artisan or rustic appearance of the pizza.