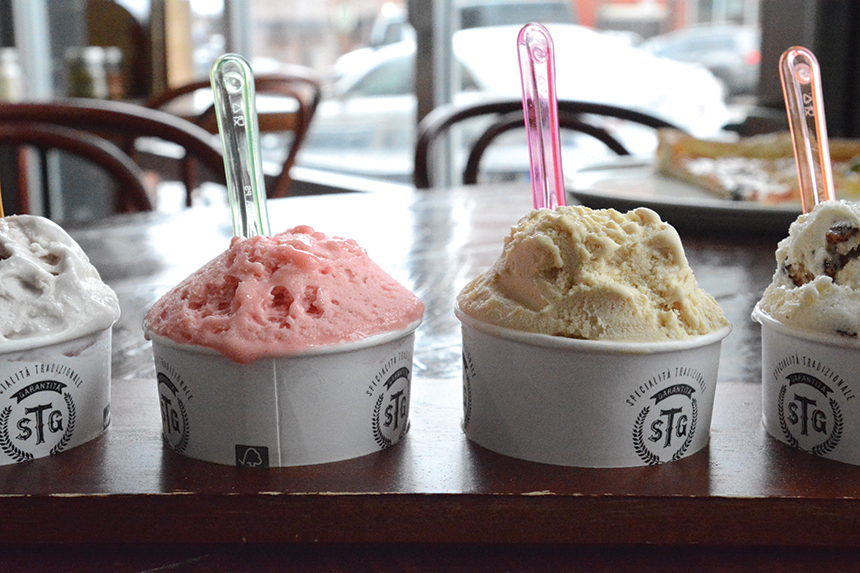 here is something irresistible about gelato. Maybe it’s the smooth, soft and creamy flavor or that it doesn’t leave your palate coated in the heavy butterfat of its dessert sibling, ice cream.

The demand for the popular Italian treat is growing in America. New and innovative flavors have sparked a rise in North America’s preference for gelato, according the ResearchAndMarkets.com’s North American Frozen Desserts Market Insights 2020-2025. And the demand continues to skyrocket.

Gelato proves to be a fitting complement to pizza. Both are meticulously crafted with culinary creativity.

Regardless of whether you source or make gelato in-house, let’s get down to the nitty gritty of what flavors are hot this year. We asked four operators with successful gelato programs to give us the skinny on popular gelato flavors.

Sam Hathorn, co-owner of Sam & Greg’s Pizza in Huntsville, Alabama, says, most popular flavors are simply chocolate and vanilla. That doesn’t keep Sam & Greg’s from introducing innovative flavors that sell well. “We have made some great flavors over the years — honey goat cheese, spicy hot chocolate (with cayenne), and strawberry balsamic (with vinegar),” she says. “In 2021 we have created pineapple upside down cake, peanut butter Oreo, and buttermilk pancake. My team also makes a vegan gelato from pea protein milk that is creamier than most vegan gelati.”

Pistachio and Oreo are favorites at Pupatella’s in Alexandria, Virginia.

Sarah Bruggeman, pastry chef at Pangea Kitchen in Evansville, Indiana, says, “We have found that Stracciatella, Pistachio, Salted Caramel, Mint Oreo, Biscotti Crunch and Peanut Butter Cup are Evansville’s favorites.” She warns not to shortcut the classics. “The classic Stracciatella can be described as ‘chocolate chip’ but we are not just adding chocolate chips to this base,” she says. “Stracciatella means “little shred” in Italian. So, we actually drizzle melted chocolate into the gelato, let it sit for a second to freeze the chocolate, and then turn the machine back on. The chocolate strings then break up into little irregular bits that are mixed throughout the entire gelato.”

Pistachio is another flavor where operators may look for cost savings. “Pistachio is definitely the priciest gelato that we make,” Bruggeman says. “We use 100 percent pistachios. Other places may use a combination of pistachios and almonds to help offset the cost. But you can taste the difference.”

Mike Bausch, owner of Andolini’s Pizzeria and STG Gelateria in Tulsa, Oklahoma, says, “The most popular flavors are what you’d expect – Fior Di Latte, Pistachio, Strawberry, Raspberry and Chocolate. We have 65 flavors and counting … some of our non-traditional flavors that sell well are Salted Caramel, Chocolate Cake and Lemon Biscotti. Lately, we’ve had a lot of interest in our Extra Virgin Olive Oil gelato. Since we’re making all of our bases from scratch (White Base, Yellow (Egg) Base, Chocolate Base and Sorbetto Base) we can experiment a lot. We’ve used ricotta, mascarpone, yogurt, broken cannoli shells, etc… We’re even experimenting with an “Everything Bagel” gelato right now.

Making gelato is similar to scratch-made ice cream, Bruggeman says. “We mix whole milk, heavy cream, sugars, dry milk powder, and a stabilizer,” she says. “We cook that base low and slow. Let it cool overnight. Next morning, we add whatever flavor we are feeling.  Mix very well. Then we turn the gelato low and slow in our gelato machine imported from Italy.”

Bausch makes gelato the old-fashioned way at STG. “We make our STG Gelato the very old-fashioned way – hot process,” he says, “meaning we blend milk, sugar and sometimes egg yolks and cook it in a pasteurizer. Much of the gelato made in America today is a mix that simply has either water or milk added to it and then is spun in a batch freezer. We chose to do it the ‘hot process’ way because we didn’t want to ever hear ‘that’s not what it tastes like in Italy’ from any of our customers and thankfully we quite often hear ‘That tastes better than in Italy.’

Hathorn too recommends making the base from scratch even though it’s more work. “It really makes a difference in the flavor of the gelato,” she says. “(Co-owner) Greg says, ‘the base is where it’s at.’”

Just like the pizza line, gelato requires equipment and training. Pupatella’s co-owner Anastasiya Algarme heads up its gelato program. “It is an investment,” she says. “All the equipment is Italian-made and quite pricey. The training is quite extensive, and we have designated staff members that specialize in it. It is not an exact science, so it’s important that the gelato maker develops the ‘feel’ for it.”

Gelato equipment requires both a large financial investment, as well as valuable kitchen space. “One of the biggest hurdles to starting a Gelateria is the price of equipment,” Bausch says. “Pasteurizers (roughly $20-$30K), Batch Freezers (roughly $15-25K), Blast Freezers (roughly $10-15K) and Display cases ($15-$20K) are expensive – but – they hold their value very well and generally have more than half their initial value 10 years later. There is also very good quality used equipment available.

“For anyone considering making gelato in their existing business. I’d probably start with the cold process since it has the least barriers to entry and the training / equipment is minimal,” Bausch continues. “If someone wishes to do a truly legit Gelato (like the type you’d eat in an Italian neighborhood that has no tourists) then the only way to go is ‘hot process.’”

Hathorn was able to find value. “We got our equipment secondhand when we started out,” she says. “It is much cheaper to take a gently used gelato freezer off someone’s hands than to buy new.”

“We were trained in Italy, use Italian equipment, Italian ingredients and Italian processes,” Bausch says. “We certify all of our Gelatician’s before they can make any of our gelato.”

Hathorn found attending a school on frozen desserts helped kick off the program at Sam & Greg’s. “It also taught us the science of gelato,” she says. “I think if you’re making it from scratch, it’s helpful to have that training.”