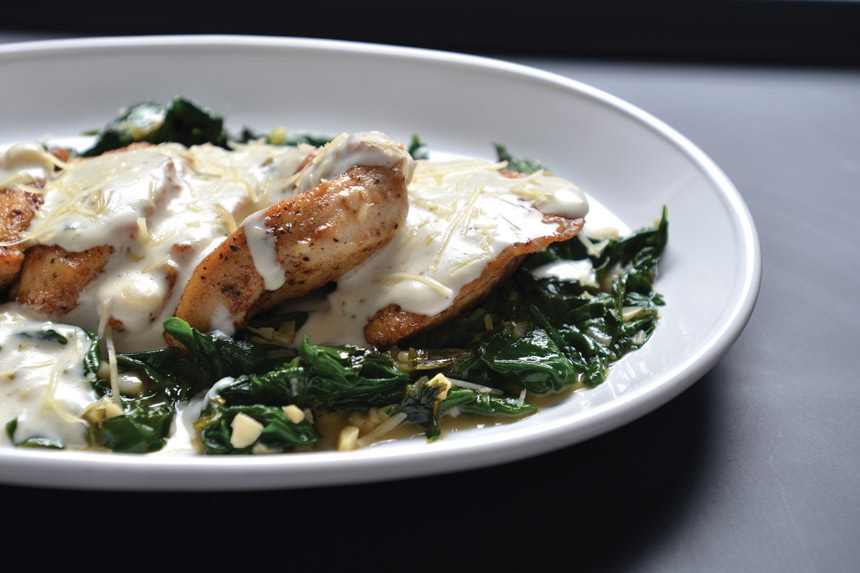 What does one of the most popular spinach and chicken dishes have in common with an Italian noblewoman soon to become a French queen? Chicken Florentine of course!

The year of 1599 brought the marriage of Catherine di Medici of Italy and King Henry of France. The teenage bride brought a lot of new customs to the royal wedding like elaborate tablecloths, glassware, silver, sugar sculptures and flowers. This new queen and her small cadre of chefs would also introduce the French to a new way of cooking which some considered “Cucina povera,” or peasant cooking. The delicious simplicity and the wide use of raw vegetables, simple grilled meats and fish with no elaborate sauce reductions or complicated seasoning. Catherine was reportedly fixated on spinach. That is why hundreds of years later, the word “florentine” to describe a dish, pasta or soup that is prepared with spinach.

Chicken Florentine is a French term to describe chicken cooked in the style of Florence and after a quick review of my old cookbooks, was probably prepared in more French kitchens than Italian. The old school way of preparing this dish was to dredge the chicken in flour and sauté it in butter, then deglaze the pan with white wine. The spinach was then put in the pan with shallot and more butter and served with a mornay sauce.

Spinach and chicken are a beautiful combination, especially in the presence of cream and/or cheeses. When I opened the Oak Room steakhouse at Boston’s Copley Plaza hotel in 1998, one of our most popular side dishes was creamed spinach. This wonderful amalgamation cooked of spinach sautéed a la minute with shallot, spinach, béchamel cream and nutmeg was a hit even with the pre-heart-attack steak crowd.

Today’s restaurant customers have become increasingly sophisticated and concerned more about health, but still have that hankering for creamy lusciousness that chicken Florentine can provide. The many advantages to putting this on your menu is that it is a simple dish to prepare and it pairs well with all sorts of cheeses and combinations.

Now, my guess is that most of the pizzeria owners reading this have spinach in their pizza-topping repertoire. There are several types of spinach that you, as a restaurant owner can purchase.

This is the classic dish made ala minute on the line when I worked at Le Ciel Bleu in Chicago. It takes just one pan for everything and relies upon the flour, shallot and garlic as the heart of the sauce. A classic Mornay sauce would suffice but I think the Gruyère takes away the delicate nature of the spinach. I added crème fraiche and cream for a final boost of lusciousness which is cut by that final squirt of lemon.