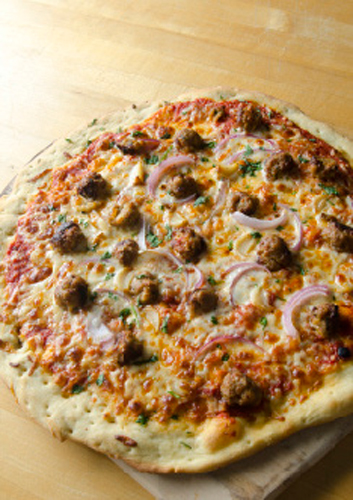 Chorizo takes your pizza menu to the next level

Chorizo takes your pizza menu to the next level

Chorizo is one famous sausage with many forms and variations around the globe. In the States, it has been often overlooked as one of the most flexible and flavorful toppings to grace a pizza. This Spanish sausage –– with its unique ruby color and slightly acidic, smoky-garlic flavor profile, what the large sausage corporations are now calling, “on trend flavor” –– are just waiting to fuse with any of your existing toppings and increase sales faster than saying “Don Quixote.”

After the Black Plague, the population of Europe began to increase and the rush was on for cheaper protein that would keep longer than fresh flesh. Christopher Columbus was intrigued by the smoked and dried red pepper powder from the New World and brought paprika back to Ferdinand and Isabella after his second voyage. They hated it, but his spice fit well with the new trend in salting, drying and curing sausage that Europeans were experimenting with, so the Spaniards added it to lean or fatty pork along with garlic, red bell peppers and red chili pepper flakes and other spices. Although Spanish Chorizo is thought to have its origins in the Catalan xoriço, there are now 17 different varieties of chorizo. Mexican and South American chorizo is much spicier because of the liberal use of hot red peppers.

My own obsession with chorizo was after seeing my friend Bruno di Fabio win at the International Pizza Challenge at the Pizza Expo in Las Vegas last year. His pizza was fantastic –– a thick, cold fermented crust with a sauce of hand-crushed, de-stemmed, de-seeded San Marzano tomatoes, macerated with one whole garlic clove, (taken out after 24 hours) and added on the crust with hand-torn basil then topped with aged mozzarella, burrata and shaved Grana Padana. Then he added the thin-sliced chorizo and beautiful bright green Castelveltrano olives and roasted cherry tomatoes. I was captivated as the chorizo’s fat leached just enough aggressive spicy dew over the mozzarella and brought together the burrata cream, olive brine and sweet tomato into a great rugby match of flavor.

Bulk Chorizo comes in many styles. “Mexican-style” tends to be spicy and can be bought in bulk for 16 cents an ounce raw. Spanish, or mild raw, chorizo comes conveniently in three-pound tubes for 22 cents an ounce and pre-cooked patties are 29 cents an ounce. There really is no better sausage presentation on a pizza than the raw application because of the glorious melting fat, but other considerations for using bulk raw chorizo are as follows.

Chorizo Meatballs
I make these meatballs every weekend on large pizzas al metro and schiacciata and with all sorts of Spanish and Mexican cheeses. The meatballs are wonderful islands in a sea of cheese and melt like the finest eye-candy! The small breading soaks up the egg and solidifies the ball when baked.

Cook’s Note: If you have less fatty pork, you can incorporate small chunks of bacon into this mix. Place all ingredients in a large bowl and mix with a gloved hand.

The next day, roll out into 1½-ounce balls and place on a parchment-paper covered large sheet pan. Place into a 425 F oven for six minutes and then pull out and roll each ball so as not to burn and/or flatten the bottom of each ball. Cook for another five to eight minutes until done. You can slice each meatball in half to get the wonderful half-sphere effect on pizzas or quarter them if you need a better “spread” on the pie.

John Gutekanst owns Avalanche Pizza in Athens, Ohio. He is speaker at International Pizza Expo and a member of the World Pizza Champions.