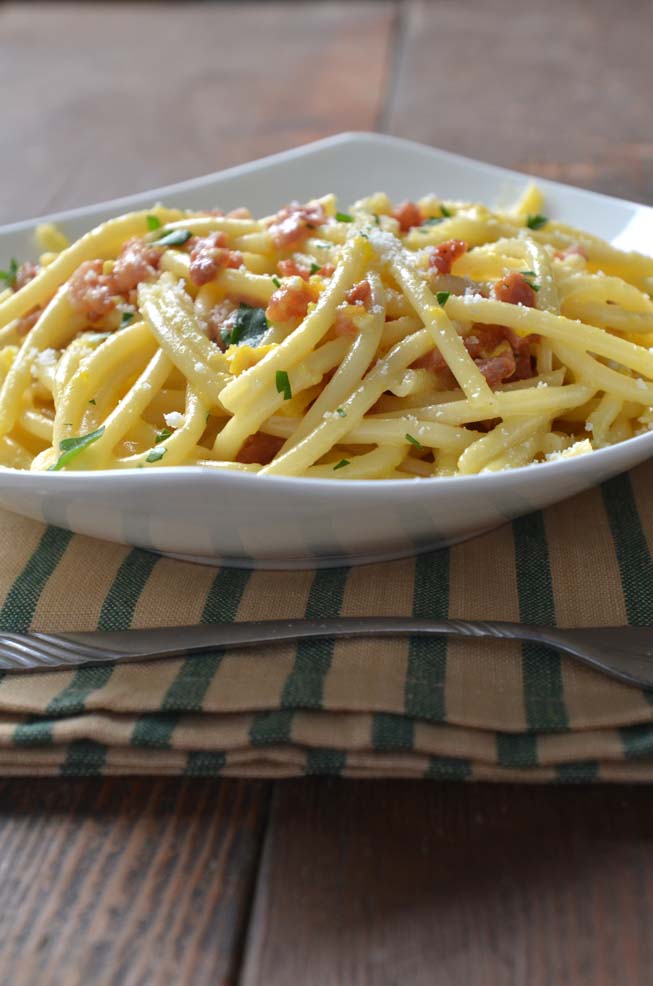 Carbonara is what some folks consider the fusion of the holy trinity of taste. The pork, egg, cheese and pepper thicken like cooling lava around the pasta bringing a savory, fulfilling richness that begs for another bite…of heaven.

Unfortunately, like many Italian recipes, it all depends on who you talk to or what recipes you follow. Most of these recipes start with: “To make authentic Carbonara you MUST…” with the recipe writers claiming historical authenticity while trying to bring legitimacy to their own Carbonara recipes. The foggy facts of this great dish remain as follows:

Last summer, I was lucky enough to visit the three-starred Michelin Chef Heinz Beck at his restaurant, La Pergola, in the five-starred Hotel Cavalieri in Rome. Chef Beck’s mantra is to use only the best ingredients to make innovative and exciting dishes while respecting culinary tradition. He was the chef that sent the culinary world into frenzy by creating his famous Fagotelli Carbonara in which he put the egg yolk and Pecorino-Romano into a small oblong pillow and tossed these cooked fagotelli in a hot pan with diced zucchini and strips of pancetta. After his guests cut into each fagotelli, the liquid squirts out onto the pancetta in one of most memorable moments in pasta.

In his immaculate kitchen, Chef Beck demonstrated what is becoming the lost art of perfect pasta. Using patience and a perfect cadence, he made a simple dish of Caccio Pepe with lime-marinated shrimp that was to die for. But like every successful chef, it was the small detail that I forced him to give up as I watched his sous chef pull the pasta out of the water and stir it into a veal stock for at least seven minutes. Chef Beck grabbed a string of spaghetti and nodded for more stirring.

“Why is he stirring so much?” I asked.

“It must be perfect before the manticare (man-tee-carr-e).” Chef Beck said smiling.

“Manticare? What’s that?” I asked ignorantly.

“It is ‘the beating in’ of ingredients like cheese and egg or with risotto and is always done off of the heat.”

“Does that make a difference?”

“Yes, manticare prevents coagulation and burning.” Then, very quickly, the chef nodded and the sous chef tossed the pasta into a large cool pan with the cheese and freshly cracked pepper and first stirred then tossed the pasta until it looked like a cream sauce. It was amazing.

Since then, I’ve found that slowing down and letting the sauce meld with no heat not only keeps the sauce from drying out and clumping but also marries the delicate flavors with the pasta much better.

Carbonara is probably one of the best examples of how “manticare” can work into making a melting cheese blend into egg yolk to form an amazing sauce of magnificent taste without coagulation. You will need to make sure the pasta is hot and also may need to add a few spoonfuls of hot pasta water if the sauce is too dry. This will be the result if there is not enough fat or because of the age of the Pecorino. No salt is needed unless the guanciale you are using has less sodium in the cure.

TIP: Will the real Pecorino Romano please stand up!

This is the most famous Pecorino in Italy and usually just called ‘Romano’ here in the States. Because of the great expense of doing business in and around Rome, there are only about four producers of this great cheese left. (I was able to get some Fulvi cheese for the Carbonara recipe.) The taste is intense, salty and peppery with that tang that all sheep’s milk cheeses have. Surprisingly, the biggest fans of Pecorino Romano are the Southern Italians, who love it with potatoes, peppers, olives, anchovies, artichokes and wild greens like chicories. Most imported “
Romano” now is made in Sardinia, (Pecorino Sardo). Why? Because they have more sheep!

For real Pecorino Romano, keep a close eye on the label.

Cook the bucatini in a large pot of water with 2 tablespoons of sea salt. This should take 11 to
13 minutes.

While the pasta has been in the boiling water 6 minutes, cut the guanciale into small lardon, (small, oblong chunks) and place in a pan on medium high heat with the extra virgin olive oil. Stir often.

Drain pasta and put into a colander reserving some pasta water.

When the guanciale is browned, crack 4 turns of black pepper in the pan then take the pan off the heat, add the bucatini and stir in the Pecorino slowly, then immediately add the egg. Continue stirring adding small amounts of pasta water (or not) to form a thick sauce.

This dish can be best dressed with sliced raddichio or endive as a nice crunchy, bitter foil to the creaminess.

John Gutekanst  owns Avalanche Pizza in Athens, Ohio and has a pizza blog called Pizza Goon. He is an award-winning pizzaiolo, baker, teacher, speaker and author.