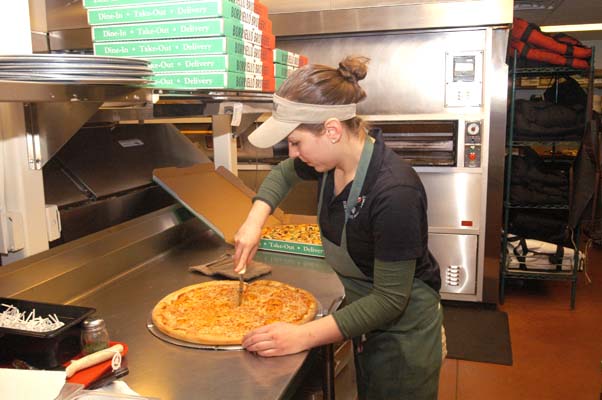 Dough Doctor: Cut it out

Dough Doctor: Cut it out

What slicing tool is best for your operation?

Q: I’m putting together an equipment list for a pizzeria that I plan to open soon and I’m trying to decide between using a pizza wheel or a rocker knife to cut my pizzas. Are there any advantages or disadvantages to using one over the other?

A: Probably the single most important question to ask is “are you planning to cut your pizzas in or out of the box?” If you plan to cut the pizzas in the box the pizza wheel is your only cutting option. But if you will be cutting the pizzas on a cutting board and then placing the pizza into the box, you have both options open to you.

While thin-crust pizzas can be cut with either a wheel or rocker knife, thick-crust pizzas are usually best cut using a rocker knife to help prevent plowing the cutting wheel through the toppings and rearranging them over the top of the pizza.

One thing to keep in mind is that while it is rare to have to sharpen a cutting wheel, the rocker knife will need to be periodically sharpened to maintain ease of operation and a clean cut.

Q: We are thinking about buying a new mixer for our shop. Is there any one type of mixer that you feel is better than another for mixing pizza dough?

A: If there is a “best” type of mixer for making pizza dough I would have to say that it would be one of the many spiral design mixers. Most of the spiral mixers that I have worked with over the years will mix a dough from as small as 25 percent of the stated bowl capacity to as large as 125 percent of the bowl capacity. I don’t recommend overloading any mixer, but spiral mixers will get the job done easier than most other mixer designs. They are also available in a wide variety of bowl capacities to fit just about any dough mixing need.

Like all good things though, spiral mixers do have some drawbacks when compared to the more traditional planetary type mixers that are commonly encountered in pizzerias. Many spiral mixers, especially the smaller sizes, do not have a removable bowl. This means the bowl cannot be extracted from the mixer for cleaning. This is further impacted by the fact that most do not have a removable drain plug in the bowl to facilitate draining water out of the bowl during/after cleaning. However, most of the larger size spiral mixers do have the bowl mounted on a wheeled dolly so it can be easily moved to and from the mixer.

Another feature of this mixer design is the lack of an attachment hub on the mixer and the inability to change out the agitator to a different design, which pretty well limits the mixer to only one task (dough mixing). Meanwhile, planetary mixers have bowls that can be removed for cleaning and agitators that can be easily changed out for different mixing tasks. Many also have an attachment hub that allows for the use of auxiliary cutting, shredding and grinding attachments, all of which combine to make the planetary a more versatile mixer in a pizzeria application.

To have the best of both worlds, if I had my choice I’d go for one of each. I would use the spiral mixer for mixing the dough, while I would use a planetary mixer with an attachment hub and a “pelican head” (plus a dough hook and a flat beater) for all other mixing, cutting and grinding tasks. With a set up like that I might never get to know my mixer repair man on a personal basis.

Q: When we mix anything smaller than a full-size batch the dough just holds onto the dough hook and doesn’t seem to get mixed very well. So we have to stop the mixer regularly and cut the dough off of the hook. Is there a better solution?

A: The problem that you’ve described has been around for many years and has been a curse to anyone using a bowl and hook to mix smaller doughs. The problem has been addressed with the development of what I like to call the reverse spiral dough hook/mixing arm as opposed to the conventional “J” arm mixing attachment that seems to cause all of the trouble. The design of the reverse spiral hook is such that it continually pushes the dough down into the bottom of the bowl rather than allowing it to climb up on the hook where it gets a free ride with little or no contact with the inside of the mixing bowl. The benefits of the reverse spiral mixing arm are improved ease of dough mixing, faster mixing times, better finished dough temperature control and more consistent dough quality from batch to batch. I have only seen one case where the reverse spiral dough hook failed to solve the problem. In discussion with the operator we discovered that the three-phase mixer was incorrectly wired (oops), causing it to run in the wrong direction. Once we fixed that, all was good.