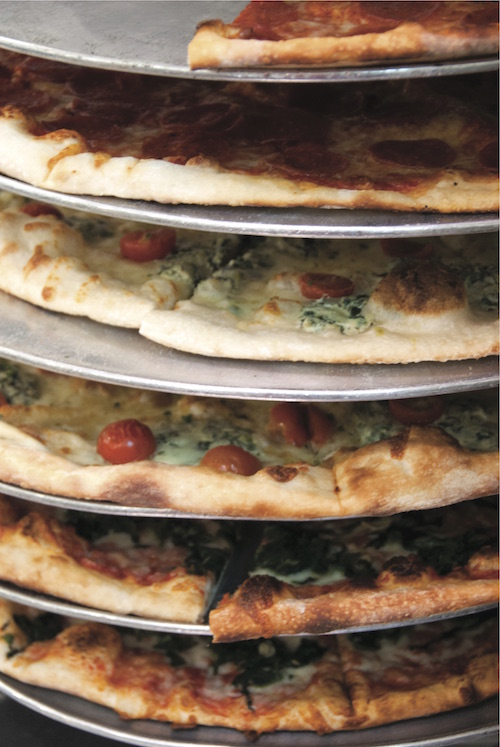 The one thing that we all have in common is that we are trying to achieve specific characteristics in our finished pizza crust. Some are trying to achieve a soft and foldable crust, while others are looking for a crust that is firm and crispy. Then there are those who are looking for pizza crust characteristics in between these two extremes, such as crispy on the outside but soft and slightly chewy on the inside. In this article I will discuss some of the more basic things we might do to achieve each of these different characteristics.

First, let’s examine soft textured and foldable. This type of crust is usually made using a flour with 13- to 14-percent protein content and about two-percent oil in the dough formula. The protein content of the flour provides the foldable characteristics and the oil contributes to the softness of the finished crust, but the real key to making this type of crust is in the baking. It has been found that baking at high temperature for a short time is vital to achieving these characteristics.

If using an air impingement, oven screens are the favored baking platform with baking temperatures in the 475 to 510 F range and baking time in the 4½- to 5-minute range. In some cases, it might be necessary to modify the top finger configuration by either fully or partially closing off one of the finger positions to prevent scorching of the toppings at these higher temperatures.

When using a deck oven, the pizzas are best when baked directly on the deck with an oven temperature of 600 F or more. Baking time should be no more than is necessary to bake the top of the pizza, which will typically be anything between three and five minutes. Here is a tip for making this crust if you want to use a coupe style or tapered edge cutting pan: do not season the pan on the outside, only season it on the inside to prevent the baked crust from sticking. The bright finish on the outside of the pan will effectively reflect heat away from the bottom of the pizza during baking, allowing for a fully baked but not very crispy (softer) bottom crust characteristic.

Firm and Crispy crust is arguably the most commonly sought-after pizza crust characteristic.

Within this category of crusts is the cracker-type crust that is typically made using flour with only 11- to 12½-percent protein content (think bread flour). The formula will typically contain about 40-percent absorption, with no sugar added and a mixing time of only around three minutes or less (resulting in a very “shaggy” dough with dry flour throughout the entire mass). This is then pressed together by hand to form “dough pucks” about one-inch thick; they’re then wrapped in plastic or placed in sealed dough boxes and allowed to hydrate/ferment for 24 to 48 hours, after which time they are brought out of the cooler, allowed to temper to 50 F and opened into pizza skins using a dough sheeter or rolling/pie pin.

THE MARGHERiTA PIE featuring a firm and crispy crust at Precinct Pizza in Tampa, Florida.

These crusts are best baked at high temperatures for a short time. In an air impingement oven dark colored baking disks work best, but seasoned screens can also be used. Baking temperature should be around 475 F with a time of 4½ to five minutes.

Now let’s look at crispy on the outside but soft and chewy on the inside. This characteristic can be achieved by using two- to four-percent sugar in the dough formula. More can be used if a slight sweet taste to the finished crust is acceptable. The sugar will induce rapid crust browning for a crispy outer crust while leaving the center portion still soft and somewhat chewy. Either in combination with the increased sugar or by itself, baking the pizzas at a higher temperature for a slightly shorter time will also help to impart this crust characteristic.

Finally, let’s look at crispy on the outside and tender eating on the inside. To impart this characteristic, we will again need to increase the sugar content of the dough to two- to four-percent of the flour weight to achieve the desired crispiness, but we will also need to increase the fat content in the formula to at least five percent to achieve the desired tenderness. Some formulas have been found to contain as much as 10- to 15-percent fat (typically as oil, but shortening may also be used). This type of crust is generally best baked at 450 to 475 F in an air impingement oven using a screen as the baking platform. When using a deck oven we have had the best results baking at 450 to 500 F while baking the pizzas on a screen for the entire baking time.