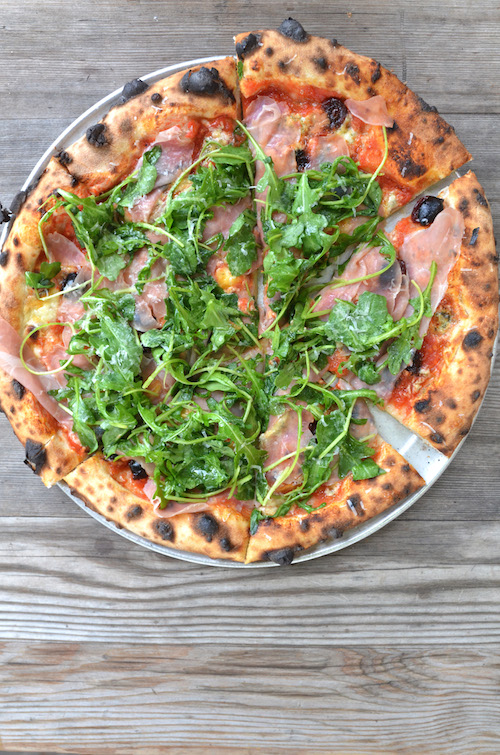 Pepperoni and sausage may rule the pizza kingdom, but ham is steadily seeking to dethrone the king and queen of pizza royalty. With its army reserve of varieties ––including styles such as country, city, tavern or picnic, to name a few, ham continues to demonstrate subtle nuances in texture and distinct flavors that appeal to operators and customers alike.

For example, at Garage Bar in Louisville, Kentucky, pizza is at the heart of their offerings, but country ham is the core menu component.  Local and regional country hams star on pizzas and at the ham bar, where diners can order a slice ($6) or a tasting platter ($21).

“We look for locally sourced quality ham, both in the pork used and the aging process. When creating our menu, we choose hams with contrasting flavors and textures. Each ham is distinctive enough that you can tell them apart,” says Richard Sible, Garage Bar’s executive chef.

Sible procures hams directly from the people that create them, Broadbent from Kuttawa, Kentucky; Meachams from Sturgis, Kentucky; Bentons from Madisonville, Tennessee; and Edwards from Surry, Virginia.

“We took inspiration from Italian delis, and our local obsession with country ham to spawn the idea of featuring multiple hams at once so people can learn about and compare hams,” says Sible. “Our ham bar is a hit with diners because of our wide variety of hams. People are excited to try hams that they may have never heard of before.”

On pizza, Sible marries country ham’s inherent saltiness with sweet ingredients like with his country ham pizza with blue cheese and dried cherries.

Get the full recipe: Country Ham Pizza with Blue Cheese and Dried Cherries

“We shave the ham paper thin, so thin that you can almost see through it, then we put it on top of the pizzas just as they come out of the oven. This allows the ham to soften and melt, releasing its flavors,” says Sible, who recommends purchasing a sharp deli slicer that is properly maintained before adding ham to the menu.

“You can have the best ham in the world, but if it is sliced poorly you are doing a disservice to the people who took years to create it,” he continues.

At The Pizza Press in Anaheim, California, ham is a optional topping and featured on “The Sun,” which is built with pizza sauce, ham, mozzarella, bacon, cheddar, pineapple, grape tomatoes, green onion and Parmesan.

“The Sun is our second most-popular pizza,” says Dustin Kelly, chef and operations manager at The Pizza Press. Kelly selected a tavern-style smoked ham due to its well-rounded taste. “It is the easiest to work with and goes well with other toppings,” he says. “The curing process used to make it gives it a wonderful savory and salty flavor. It acts almost as a pizza seasoning, bringing out the natural characteristics of other ingredients. At only 20 cents​ an ounce, it is very affordable.”

“Ham is one of our most popular ingredients,” says Drew French, Your Pie’s founder. “Capicola has an authentic Italian flavor profile that works well on pizza, and everyone loves honey-baked ham. There really is no combination that we wouldn’t tell you to go for.”

Your Pie even found success with a ham-and-anchovy creation. Yes, during a “What’s Your Pie?” promotion where guests submitted their own creations the “Ham-chovie Deluxe” featuring ham, anchovies and green olives was voted as one of the winners.

“I use ham in many ways from charcutierie and cheese samplers, base flavoring for sauces and gravies, to ingredients in a sautéed pasta dish,” he says. “Ham adds flavor by adding seasoning instead of adding salt or Cajun spice in the case of Tasso ham. It adds texture in different ways whether it’s sliced thin and crisped on top of a pizza or diced and added into a sauté or pasta dish.”

Keane cooks with country ham, prosciutto, Serrano ham and even cures and smokes his own hams in-house for specials and events.

“There are many different types of hams, and even more ways to do different things with them,” he says.
“Just give ham a try,” adds Kelly. “It’s incredibly versatile and has a place in some way, shape or form in nearly any style of food.”

City Ham: America’s most popular ham. It is a non-aged, brine-injected product that is usually fully cooked.