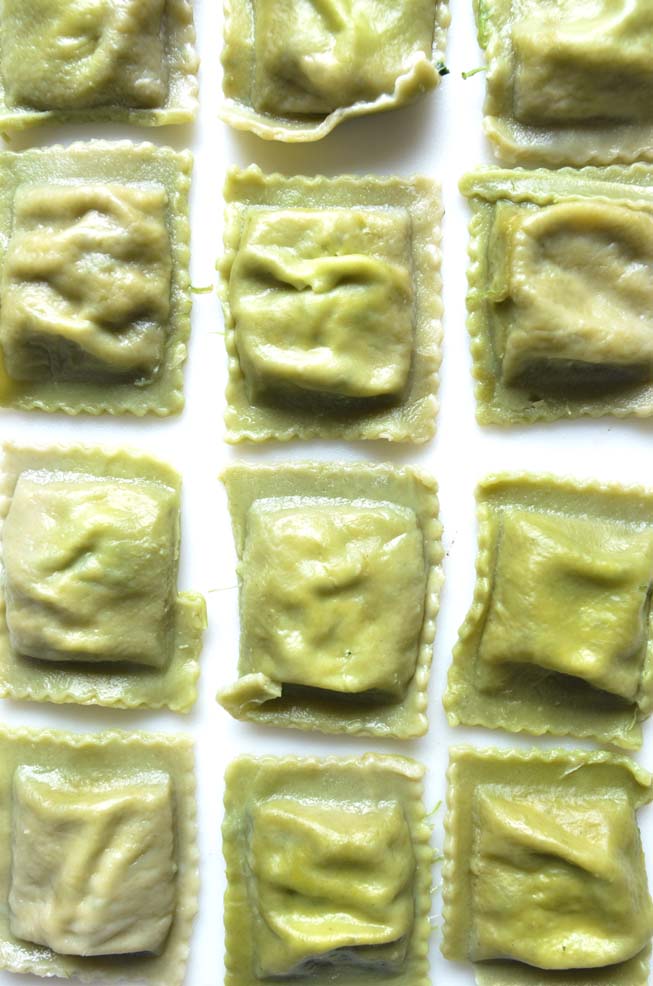 Stuffed pasta pillows, known as ravioli, have been filled with either beef or cheese for decades. It was that simple. Now with the Food Network’s popularity, the culinary arts have become such a highlight with more and more home cooks, chef wannabes and other great culinarians getting their creativity on! I’ve seen ravioli fillings get as creative as some the most intriguing entrées over the last decade or so.

Making homemade ravioli can be a bit time consuming and perhaps a tad frustrating at first. It could actually discourage you from trying it again. Don’t give up!

I want to teach you some techniques and amazing fillings that will leave your customers craving more.

Let’s talk about how to make and roll out your pasta dough for ravioli. The dough is simple. It’s just like making any pasta dough. Some cooks use white flour and eggs. Although that works very well, I love to use semolina flour and warm water. You can also mix white flour and semolina or even some whole-wheat flour. You can add an egg and then your water. How you are going to roll out your dough will determine how tight or soft you’ll make it. If you will roll out your dough with a rolling pin on a flour-coated workbench, you’ll want your dough to be soft enough to work.

Another option is to run the dough through a sheeter or roller by a hand crank or even an attachment to a mixer, which would require your dough to be a bit stiffer.

The third way is to use an extruder with a lasagna noodle attachment that you would use to mix your dough in the hopper. In this case, your mixture would be more of a granular texture before you extrude and not really a dough at all.

Regardless of which technique you use, you will end up with a thin sheet of pasta dough about six inches wide and however long you want to make it while still fitting on your counter. You can make a second sheet the same size so one sheet will be the bottom and the second sheet will be the top of the ravioli. You’ll be able to get two rows of filled ravioli per sheet, unless you want to fill one side of the sheet and then fold the other half of the sheet over the filled side.

When filling ravioli, you want to brush some egg wash on the bottom layer of the pasta sheet. This will act as the glue. Deposit your filling with a spoon or small portion scoop and then carefully put the second layer of pasta over the filled bottom layer. Carefully push any air out to the edges and allow the pasta sheets to seal.

There are a few ways to cut your ravioli. You can use a round or square ravioli cutter, punching out each ravioli one at a time. Or you can use a straight or zigzag edged roller cutter to separate the ravioli, and a ravioli-cutting rolling pin.

You can also cut squares of pasta about the size of a wonton wrapper (as a matter of ease, you can use a wonton wrapper to make ravioli). After depositing the filling, you can fold the ravioli once from one corner to another creating a triangle-shaped ravioli.

After your ravioli are cut, it’s very important to let them rest either in the refrigerator or even the freezer to allow the edges to seal properly so they don’t open up during the boiling process and lose their filling.

Now that we’ve gotten the building of the physical ravioli down pat, let’s talk filling and sauces. This is where the sky really is the limit. Really, anything goes, but it’s important to know that you need a moist and fairly smooth filling. Having rough-edged ingredients will more than likely rip a hole in your ravioli and destroy it in the boiling process.

If you’re going to use proteins like chicken, veal or lobster, you don’t necessarily need to puree the heck out of them where they are not recognizable, but chop them fine enough where it won’t rupture the ravioli itself.

I do like to have a small amount of cheese mixed in with the protein to help bind it together. Remember, seasoning your filling is a very important part of making ravioli.

Cooking your ravioli doesn’t take as long as you’d think. Have some salted simmering water going without being a real rapid boil. A rapid boil could destroy your ravioli, especially if you have some weak points in your seal. A nice and gentle simmer is the way to go. Carefully place your ravioli in simmering water without overcrowding your pot. They should only take three to four minutes if they’re coming out of the refrigerator and five to six minutes if they’re coming out of the freezer. Be sure and have your sauce hot and ready to go when you drain your ravioli so that you can assemble your meal quickly.

Here are some filling ideas:

You have many sauce combinations to create that will complement your ravioli:

You can add some toss-ins to your ravioli and sauce. Some crisp crumbled pancetta or bacon along with some freshly chopped parsley would be a nice touch. Perhaps capers and sun-dried tomatoes will finish off your ravioli dish just right.

Don’t be discouraged if it doesn’t come out perfect the first time. Once you get the hang of making your own ravioli, you will love the art of stuffing your pasta!