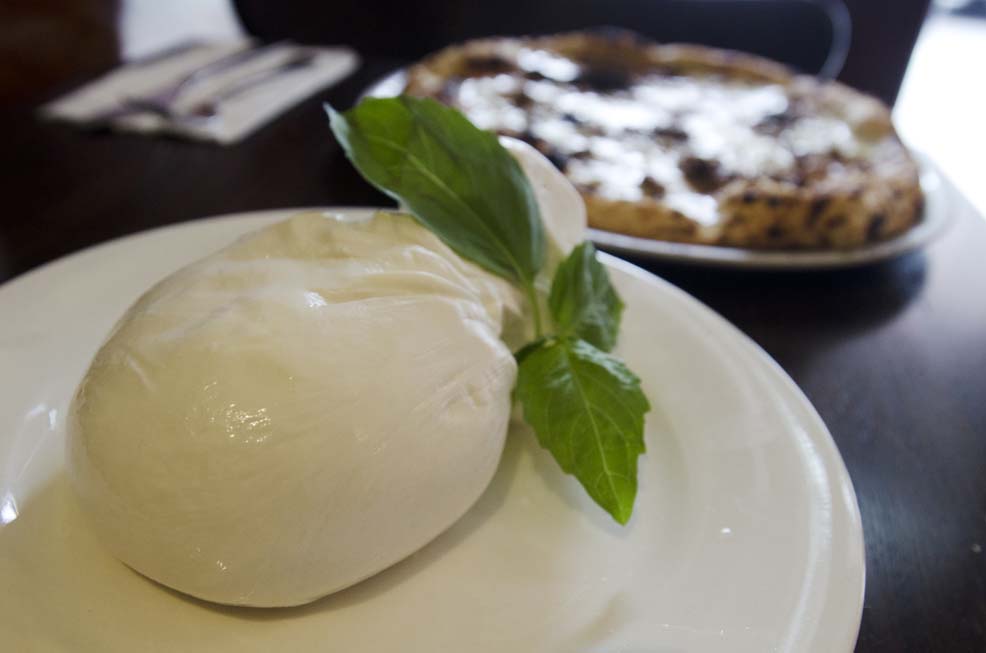 That’s because since 1998, Whitewater, Wisconsin-based Toppers Pizza, which has 70 locations across 11 states, has used a local cheese company as its primary supplier and manufacturer for its mozzarella.

Located in Belgium, Wisconsin, the manufacturer receives milk from more than 130 local dairy farmers — the same farms Gittrich drives past.

“When I hit the road I see the cows that are churning out the milk that ultimately becomes our cheese,” he says.

Toppers Pizza purchases an average of 40,000 pounds of mozzarella per week, with an excess of more than 160,000 pounds per month.

“When I first got into the business, I didn’t have the knowledge and understanding of the delicate balance involved in crafting the perfect cheese. So, I leaned on Jeff (Jeff Hiller, president at Cedar Valley Cheese) and his team’s expertise,” Gittrich says.

Deciding to bring fresh mozzarella production in-house or purchasing it from a supplier can be a make-or-break business decision. For Gittrich, it was an easy one. “As we expand, it’s good to know that our cheese partner is right down the road,” he says.

“We were in the process of opening a new restaurant with a new staff and decided that consistency was paramount,” he says. “Then we found a product that we really liked.”

Twice weekly, shipments of plastic wrapped mozzarella arrive. “Because the cheese is wrapped instead of stored in liquid it’s a bit dryer, and I really like that,” says Schroeder.

He also finds fresh mozzarella melts differently than traditionally shredded mozzarella. “The moisture content and surface area is significantly different. The fresh mozzarella has a much creamier texture and flavor,” says Schroeder, who prefers to slice or tear fresh mozzarella very thin so it melts right into a pizza.

Michael Pasquarello, chef/owner at Bufad in Philadelphia, Pennsylvania, purchases fresh mozzarella simply because “If I don’t think I can make it better, I will buy it from someone who can,” Passquarello says. He uses a fior di latte mozzarella from a top-of-the-line manufacturer.

“The cheesemakers are consistent while still having that small production quality,” he says.

Some operators prefer making their own fresh mozzarella. For example, Fabrizio Cavallini, chef at Monello in San Diego, California, makes 20 mozzarellas twice a week. “We take pride in our Milanese culture. This was another perfect way to show off our culture,” he says.

His fresh mozzarella appears in a Caprese salad, pizza and in “carrozza,” which is a mozzarella sandwich dipped in yolks and lightly fried.

Pedro Arreaza, market sous chef at FarmTable Kitchen (part of Locale Market), based in St. Petersburg, Florida, assures that fresh mozzarella is not hard to make.

“It’s a good idea to make it fresh, not only for the art of making mozzarella, but also because it looks really cool to customers,” he says. “People are more attracted to mozzarella when they see it being created. A lot of people have never seen that process done before.”

For his fresh mozzarella, Arreaza uses an all-natural curd from a supplier. He cuts the curd with a chitarra, a string tool shaped like a guitar. Then he adds salt and uses two stages of water. The first stage brings the curd to temperature. Then he drains about 90 percent of the water and leaves a bit of the brine in it. The final stage is stretching the mozzarella.

“Once you add that second stage, it gets super soft and stretchable,” Arreaza says. “You can work the mozzarella together. I usually use a big wooden spoon to be able to pick it up and stretch it out. Once the mozzarella gets all bubbly, it is telling you that it is ready to be shaped.”

Arreaza has an ice bath waiting to shock the mozzarella. He adds a bit of salt to the ice bath to incorporate seasoning into the cheese.

He shapes the mozzarella into balls or logs wrapped in plastic wrap, making sure there isn’t too much air in the cheese. For logs, rolling the mozzarella naturally forms a log shape.

“I tie the ends and submerge it in the ice bath for five to 10 minutes so it keeps its log shape. When they slice it for pizza, we want to have a nice, sliced round that melts well and gets a good color in the oven,” Arreaza says.

If you’re indecisive about whether to purchase or make your own fresh mozzarella, Pasquarello offers this recommendation: Make your own and buy some that inspires you. Then compare the two.

“Don’t even think about making it for your customers until you can make it better than your favorite producer,” he says.