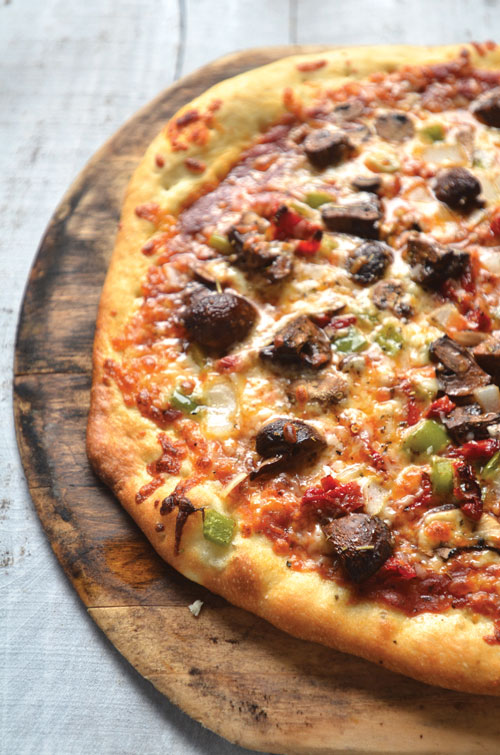 Pepperoni has one implementation on pizza. Pepperoni goes on top, before the bake like any other typical topping. The size and taste of the pepperonis will vary, but there aren’t multiple species of pepperoni. Mushrooms, by contrast, have so many variables that are incalculably different. There are over 10,000 species of mushrooms, 12 of which are incredibly popular for pizza. It’s essential to know how they’re used most often and why. Along with that, here are some new approaches with mushrooms that you can incorporate into your pizzeria today.

Growing up in both New York and California, I saw the stark difference in mushrooms on pizza from both coasts. The tri-state area’s East Coast kitchens seemed to be closet-sized and only carried canned mushrooms. When I moved to the Bay Area, I noticed a much different mushroom approach to pizza. California chains used fresh mushrooms that were dry and typically unseasoned. This is one in a long line of differences between these two different areas and their pizza approach in the mid-’90s.

I didn’t know why New York pizzerias used the canned mushroom. Was it the space thing? Was it because the other guy was using it? Was it because they genuinely liked it? Contrast that with the fresh mushrooms, which appeared as overly dry. This approach wasn’t ideal for maximizing flavor but did look better in a photo.

At the time, I didn’t think there was a right or wrong. After owning a pizzeria for as long as I have, I’ve seen every iteration of mushrooms on pizza. I know that no one way is wrong or right, but that there’s so much more that can be done with mushrooms. It’s truly a dark horse in the lineup when you consider all the potential iterations and combinations mushrooms provide.

Pre-marinated. By leaving mushrooms to soak in oil or dressing, you allow them to absorb flavor to go from merely a texture topping to a means of conveying flavor. By placing mushrooms in a marinade, you control the uniqueness. You can go to town on how much seasoning you give to it to make it your own. The best part of this approach is using these same mushrooms on a Caprese appetizer to cross utilize your mushrooms.

Sautéed. By sautéing mushrooms, either making it to order or in advance, it lets the mushroom get more flavor before they ever get to your pizza. You can also cook off a lot of the water that might make your pizza soggy. You can also sauté the marinated mushroom or pre-sauté and then marinate.

Some people love the look of a flat white mushroom on the top of their pizza, and that’s fine. That’s your call to make. If you want to protect the mushroom’s bake, putting it under the cheese is always an option.

Whether they’re pre-marinated, pre-baked or under the cheese, there are so many different approaches to mushrooms. Even when it’s the same mushroom, let alone the several varietals of mushroom available.

At Andolini’s, we make a wild mushroom pizza with several mushrooms of whatever is seasonally available. We also bake a classic sliced button mushroom and a sauteed portobello mushroom. On your straight-up mushroom, pre-marinating in olive oil with garlic or even lemon juice can help preserve or enhance the flavor.

Portabellos. I love portobello mushrooms. I love their ability to give a meaty vibe to a non-meat pizza. It provides a feeling of protein without protein. It also means you can sell a vegan pizza that has some character to it. When I first started, we would cook them to order, but I realized that doing a pre-sauté on them makes us more prepared for anything that could come at us. Over time, I’ve learned to have the kitchen ready for a 50 to 100 pizza order at any second. When you prepare for that volume level to occur sporadically, you create an inverse to Murphy’s law. If it can happen, it will, and you’ll be set up for a large order, which will, in turn, become several large orders.

For portabellos, we remove the gills with a spoon before the sauté. For classic button mushrooms, slicing them thinner helps reduce the amount of water that will occur when you bake them. But again, pre-baking a mushroom or pre-sauteing can get rid of excess water that could make for a soggy pizza. Or you could cook them as is and then drain your pizza, but it’s not ideal.

Truffles. Truffles on a pizza. If there’s one thing inherent about a truffle is that it equals instant classy. It’s an expensive item that knows it’s expensive and can garner more money per pizza. If that’s the restaurant style you are marketing, truffles are a great choice to instantly set you and your menu apart. Adding truffle oil as well will take the flavor over the top and drive the truffle point home.

Shitake. Shitake mushrooms are my favorite. I love how they don’t look the same, and when sautéed and used as a topping, they look artful and taste amazing. I prefer to sauté them in butter and bake with fresh mozzarella on top. Bear in mind, using butter for the sauté won’t land with health-conscious customers and immediately negates it from being vegan.

Regardless of what mushroom choice you have, know why you do it and then try it several different ways in a controlled test to determine what you like the most. When you try each mushroom, each particular way, you allow yourself the knowledge of why you made your choice, and that empowers you to sell it better. What you like the most will determine what you’re able to be passionate about and sell the most. Mushrooms are such an adaptable topping that to only have one mushroom in your pizzeria short-sighted. Choosing one is holding back from the menu possibilities mushrooms afford you; really lean in and make the menu say portobello and cremini instead of just one listing of “mushroom.” Actions like this instantly make your menu more upscale and more viable in the competitive market.

Mike Bausch  is the owner of Andolini’s Pizzeria in Tulsa, Oklahoma.