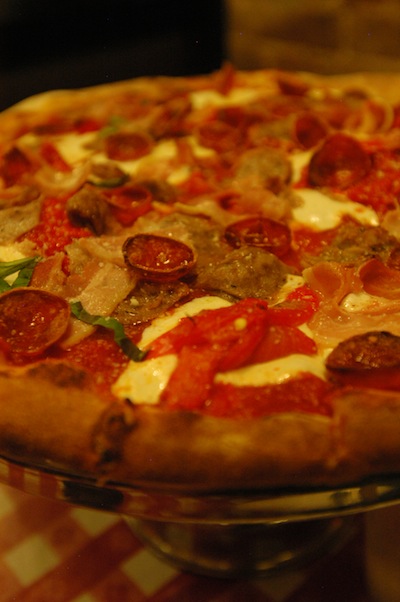 Man on the Street: Sharing is Caring

Man on the Street: Sharing is Caring

Pizzerias have been obsessed with ownership since the dawn of time. When the first American pizzeria opened in 1905, it wasn’t called Lombardi’s. The front window said “Pizzeria Napoletana,” but locals called it Lombardi’s because that was the name of the guy behind the counter. People even attribute ownership to pizzerias that don’t have possessive names (Gnocco in the East Village incorrectly becomes Gnocco’s; Lucali in Brooklyn falsely becomes Lucali’s) because we customers like the idea of a personality behind a pizza. But sometimes the concept of ownership overstays its welcome and becomes distracting for operators who think they’re under attack from all sides.

I had an interesting conversation a few weeks ago with a friend who was complaining that a pizzeria across town stole his idea for a pizza with a unique topping combination. He had received a serious amount of press for his pizza and didn’t want someone else trading on his creativity. I completely understand the frustration, but worry that something like this can become an unnecessary roadblock. First of all, nobody owns a topping combination. Even if you’re the first to market, it still doesn’t mean you have any right to prevent others from copying you. Beyond that, it’s entirely possible that someone with less media savvy made a pizza with your topping combination before you did. Frank Pepe’s is famous for its clam pizza, but it’s highly likely that someone else made it first. Being the first to make something gives you a head start, but that doesn’t mean you’re the exclusive owner of the idea.

Some owners and chefs think it’s a legal issue, but that’s almost never the case. Just last week I received a call from another pizzeria owner claiming a recently fired employee was preparing to open a rival pizzeria with stolen recipes. The owner was understandably upset, claiming not only a moral violation but a legal one as well. There’s no question as to the moral problems with directly copying a product that you did not create, but the law may take a different point of view. I’m no lawyer, but I do know that a trademark would only apply to a name or image most of the time. If you register a trademark for “Mega Meatza Pizza,” you could theoretically protect that. Copyright protects an expression but not facts. The law currently views a list of ingredients paired with directions as a set of facts and not a piece of artistic expression. A book containing recipes can be copyrighted, but not the recipe itself.

Rather than wasting time being frustrated about someone using your idea, just remember that we all make use of ideas that came before us. You didn’t invent dough and you didn’t pioneer the idea of putting sauce and cheese on top of it. Someone taught you a better fermentation technique and stretching method. Someone taught you the best way to crush whole tomatoes. Your pizza is nothing but an amalgamation of influences. Focus on making your pizza the best it can be and let less creative operators pick the pieces that suit them. If you’re really as good as you think you are, they won’t beat you in the long run.