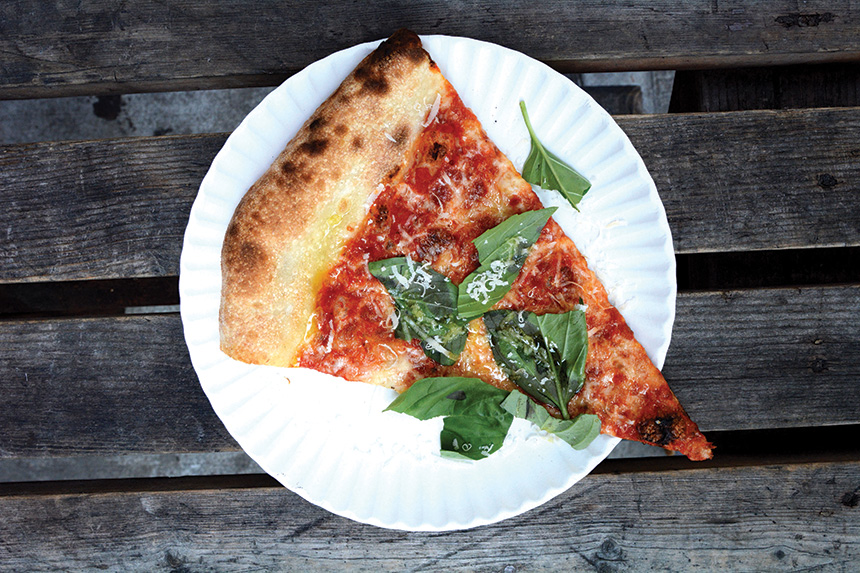 Man on the Street: The Rebirth of the New York Slice

Man on the Street: The Rebirth of the New York Slice

New York City’s pizza scene experienced an identity crisis over the past decade. If you asked me to define “New York style” pizza in the early 2000s, I would have told you it’s a large, thin, puffy-edged pizza sold by the slice and eaten via the fold hold while standing or walking. That’s been the definition since gas ovens outpaced coal-fired ovens by the middle of the 20th century. But those slice shops that once appeared on every corner were suddenly becoming a relic. Convenience and value had become more important than quality.

It really hit me when tourists would refer to wood-fired neo-Neapolitan pizzas and the newly popular $1 slices as if they exemplified New York style pizza. People were more interested in the high end and the low end, but they were ignoring the middle.

The slice shops that came to identify NYC had fallen out of vogue as Gotham began to embrace styles from other cities. We had the Neapolitan wave, a Detroit style wave, and even a few Roman style pizzerias. Heck, we even had a Rhode Island style grilled pizzeria for a minute. A city that was once known for being so territorial and exclusionary had flipped!

On one hand I was delighted to see such a broad embrace of foreign styles, but on the other it felt like we were losing an important part of NYC identity. That’s why it has been such a relief to see a new breed of slice shop popping up these last few years. These new pizzerias pay homage to the classic shops that used to thrive on every block with the addition of more thoughtful ingredient selection and production process.

Scarr’s in the Lower East Side brought house-milled flour and organic ingredients into the slice format. Brooklyn’s L’industrie does multi-day fermentation and tops each slice to order. Best Pizza pulls their own mozzarella in house. These are things we’d only seen in artisan pizzerias, not in slice shops.

With the stage set, the pandemic only confirmed the return of the slice. Sit-down joints were struggling while slice shops flourished. I experienced the contrast this week in Soho. I was walking away from Lombardi’s, a pizzeria that just recently lost the lease on one of the two buildings they rent. On the opposite corner I saw the brand-new facade of Upside Pizza, a retro-chic slice shop that uses natural fermentation for their dough. The serendipity was almost poetic. Behind me was the skeleton of The Before Times, in front of me was the infant smile of the future.

Just a few short blocks away is Zazzy’s, another new slice joint that’s taking advantage of cheap leases by opening multiple locations across the city. Just like Upside, it uses high-powered electric ovens and makes pizza that revises the classic slice with some much-appreciated updates. They avoid commodity flour, practice intelligent fermentation, and bake their pizza to the point of light char.

As the pandemic has encouraged outdoor dining and take-away windows, maybe it’s finally time for the rest of the country to fully embrace pizza slice culture. Derrick Tung just opened a Paulie Gee’s Slice Shop in Chicago and there’s another one coming to New Orleans. John Gutekanst is opening an Avalanche slice shop in Athens, OH. Could this be a true nationwide slice renaissance? I can only hope!