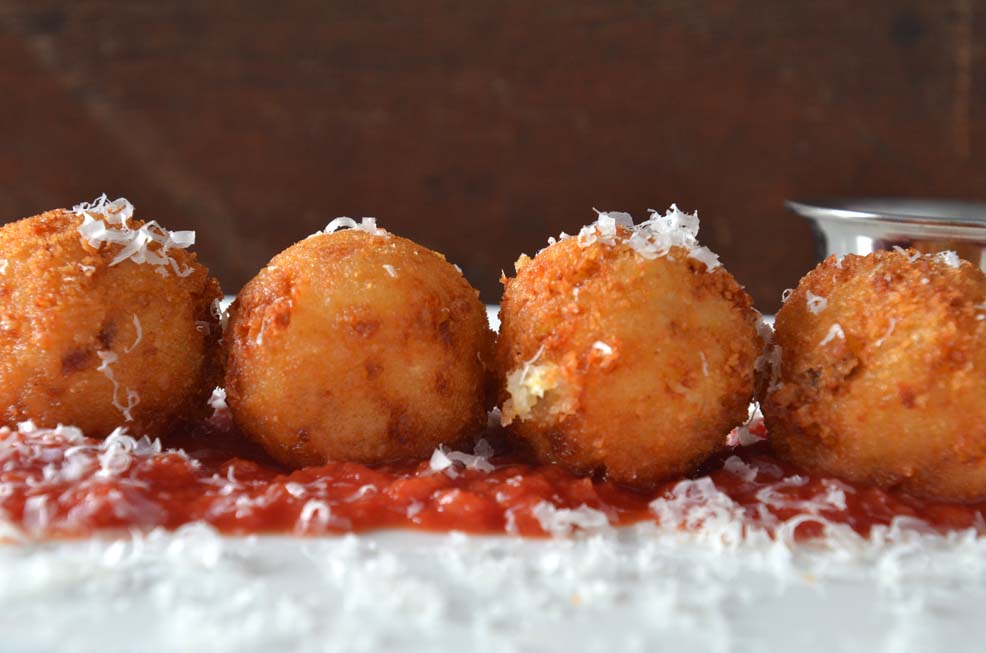 The next hot app

The next hot app

No matter the size or shape, arancini appeals to many

Michael Spurlock may have grown up in Detroit, Michigan, but Boston was where he first tried arancini. “After I ate it I said, ‘If I ever open a restaurant, it’s going on the menu.’ ” In 2013, Spurlock opened Loui Loui’s Authentic Detroit-Style Pizza in Louisville, Kentucky, and arancini became a house specialty.

What exactly are arancini? Arancini, which means orange in Italian, are stuffed rice balls coated with breadcrumbs and fried. Originally, this Sicilian street food was the size of its namesake; however, today it varies in size from golf ball to tennis ball and in shape from cone to sphere.

“You can make it vegan, vegetarian or with meat ragú. Really the flavors are endless almost like pizza toppings,” says Luciano Del Signore, chef of Bigalora Wood Fired Cucina, which has locations in Ann Arbor, Southfield and Royal Oak, Michigan.

His $7.50 arancini appetizer, referred simply on the menu as “Risotto Balls,” is available at all locations. It’s prepared using Arborio rice, saffron, mozzarella and peas and served with grass-fed beef Bolognese. “You have winners and losers on a menu and this is a winner,” says Del Signore, who estimates its food costs at less than 30 percent.

Rocky Maselli, executive chef at A16 Rockridge in Oakland, California, builds his arancini risotto with tomato, saffron, white wine and cheese brodo (cheese rind broth) and stuffs it with mozzarella. “It’s not very expensive. It’s under 15 percent for food cost and sells for $7,” he says.

While ground sausage or beef are Mirabile’s most popular arancini, he does cook variations. “I make rice balls with mixtures of eggplants, olives, artichokes, broccoli or cauliflower. I like serving these with Béchamel or a creamy pesto sauce,” he says.

Spurlock experimented with salami, ham and pepperoni, but ultimately, decided prosciutto made the best arancini stuffing.

Although, he admits, “A lot can go wrong when you make it.”

A big issue is that rice won’t bind. To prevent this, Spurlock cooks risotto in chicken broth mixing in Parmigiano-Reggiano and egg. “It really helps it stick together,” he says.

Be careful: additional ingredients can cause risotto to get too wet. “Risotto continues absorbing liquid until the rice grain turns to mush. You want to avoid that,” says Maselli. “You need to create a thick risotto. You can’t walk away from the risotto pot when you’re cooking it. It takes about 25-30 minutes to make the rice properly.”

After his risotto cooks, Spurlock spreads it on a sheet pan, covers with plastic wrap and refrigerates overnight. “The cooling process evaporates any excess moisture,” he says.

Mirabile prepares rice balls inadvance and freezes them. While Arias pulls the risotto off the heat when it’s a bit al dente and keeps in mind that it continues cooking while it cools.

There’s no denying that arancini are labor-intensive. After stuffing and shaping arancini, Diaz does a three-step coating process using flour, egg wash and Panko breadcrumbs. “You want the arancini prepped enough in advance so the Panko does not get soggy, and the outside remains crunchy,” she says.

Spurlock recommends an assembly line approach during prep. First, he hand-forms a ball with fresh mozzarella and prosciutto. Second, it’s surrounded with risotto. Then it’s dipped in egg whites, rolled in flour, dipped in egg whites again and rolled in breadcrumbs. Lastly, breaded balls are fried.

“If you do that all in one motion you get goop all over your hand. It still tastes good, but it won’t look nice,” says Spurlock, who suggests wearing gloves sprayed with no-stick cooking spray.
All this attention to detail is worth it. When three tennis-ball sized arancini arrive tableside at Loui Loui’s Spurlock describes the look on diners’ faces as “Oh, wow!” “This dish gets people to come back,” he says. “It’s our most popular appetizer. We sell more of it than anything — even meatballs.”

Cook rice until tender. Drain and cool. Add two eggs along with cheese, salt and pepper. Mix well and set aside.

Place 2 tablespoons rice in the palm of your hand. Make a well in the rice; place about 1 tablespoon of meat mixture into the well. Mold rice around meat to form a ball or egg shape. Repeat with remaining rice and meat.

Heat remaining cup of olive oil in a sauté pan over high heat. Crack remaining two eggs in a bowl. Whisk. Dip rice balls in beaten egg, roll in breadcrumbs and drop them in the hot well, making sure they’re not touching one another. Sauté rice balls until golden brown on all sides, about three minutes. Using a slotted spoon, remove rice balls and drain them on a paper towel. Repeat with remaining rice balls. Serve warm.