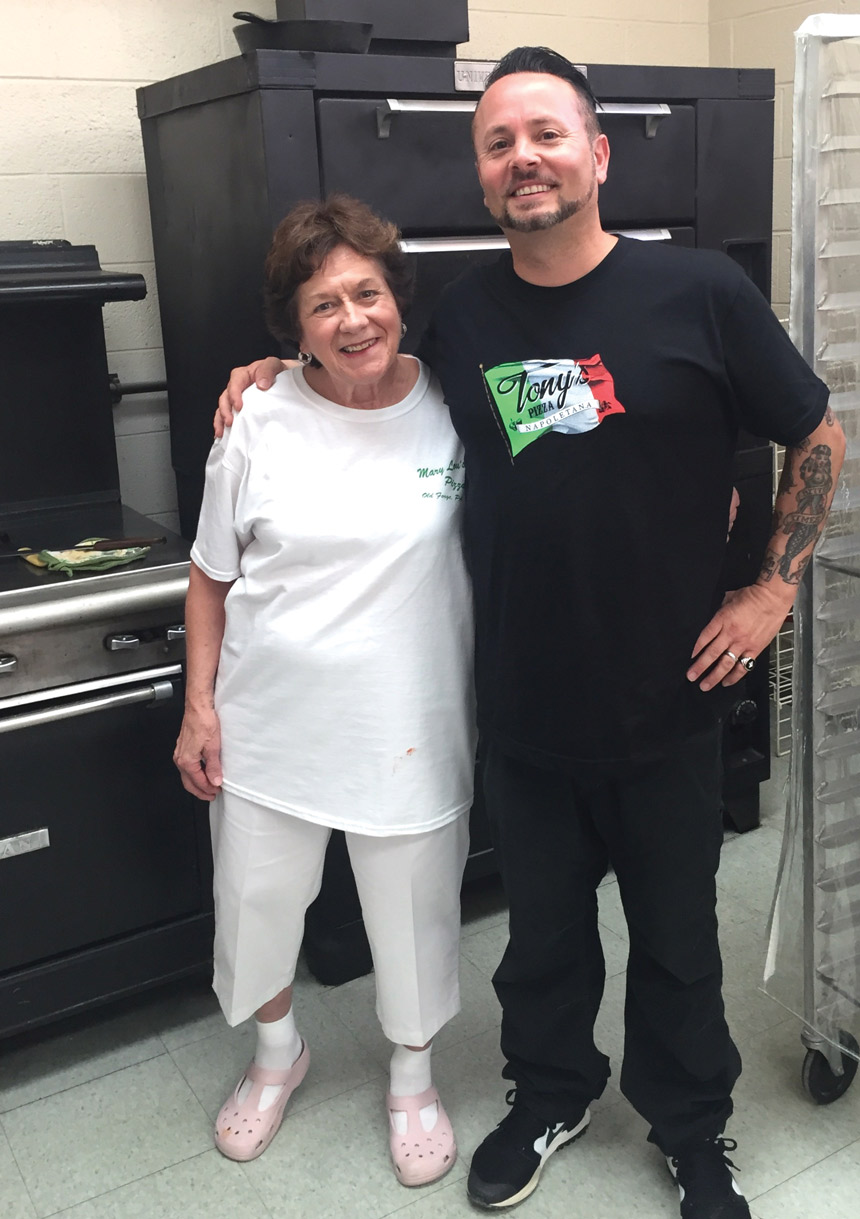 I was on an East Coast book tour and headed to Old Forge, Pennsylvania, with fellow pizzeria owner Scott Anthony. I told Scott that Old Forge was the pizza capital of the world and we were going! Old Forge has a rich history of Italian immigrants who settled there. They mined anthracite, which is coal that was common to heat homes and was used in railroad transportation. Old Forge is a small town with a population of around 8,000. Many people from Pennsylvania have never even heard of Old Forge.

A few days prior to visiting Old Forge I received a Facebook message from a fellow pizza man named Tony Cerimele.  He said, “I heard you are going to Old Forge on a social media post — you have to try Mary Lou’s.” I said it wasn’t one of my stops but I would take the advice of a local and meet up. I love to meet the people behind the pizzerias and hear their hometown stories.

Walking into Mary Lou’s was like walking into your grandmother’s house. Everything was pristine and you could eat off the floor. Her decorations were a combination of antiques, knickknacks, and crafts, and they were in all the right places. There were three women. One of them was Mary Lou, and she couldn’t wait to make me a pizza. She made me several, actually. Tony Cerimele was there along with another pizza man named Cosmo Salerno. They were closed that day, but she opened for us, and we were in her kitchen. Mary Lou made us a “tray,” which is a pizza made in an oiled half sheet pan. It had Mary’s secret sauce and a lot of cheese. I mean a LOT.  Her combination of cheeses is a secret, but I believe it may have been a mix of Brick, American and/or white cheddar.

The pizzas took a long time to cook because she had the temperature set at only 350!

“Just like home,” Mary Lou said to me. She tells her customers, “You have to wait because that’s what makes the pizza special — the long bake.”

It came out piping hot and the cheese pull was out of this world. One of the ladies said, “I cut the pizza and box it.” The other one said, “I make and apply the stickers that go on top.”

It was a friend and family run operation. After speaking with the ladies, I quickly figured out that everyone in this town seems to help one another out. They said that if their mixer went down and they couldn’t get it fixed, that someone from another pizzeria would come help. I thought that was wonderful to hear, and you don’t hear that often these days. She then made me a stuffed pizza that was different. It had a light amount of thinly sliced onions and herbs on top. It was square, baked in a pan, and filled nicely. After the bake she let it sit and set.

“Don’t cut it early,” Mary cried out.  So we waited. She said that’s the important part. She was right: it was delicious. Most of the time we are in a hurry to cut a pizza and rush it out, but not for this particular style. I noticed a T-shirt that had most of the pizzerias from Old Forge on it. It was very cool, and typically you don’t see shirts with competitors’ logos and pics on it.  This type of camaraderie was another highlight to me. Old Forge is simply a different place. That’s why I’m going to tell you more about it next month!