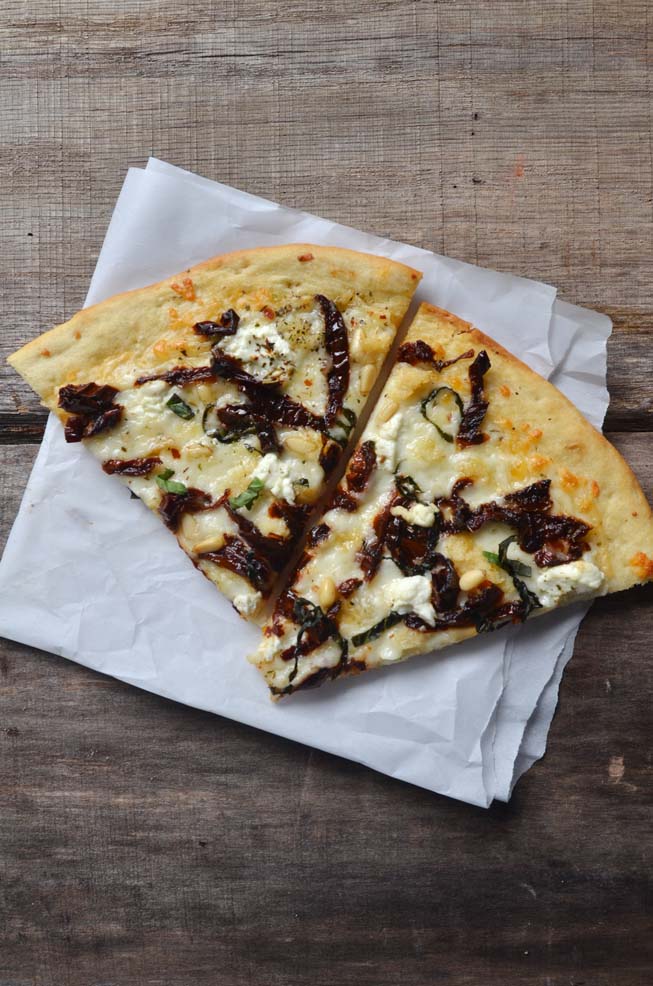 Soak Up the Sun

Soak Up the Sun

Spring may bring a bounty of produce, but a good tomato? Not as likely. What’s a pizzeria operator to do? With its sweet, intense flavor and multiple uses — sun-dried tomatoes are the answer. Sun-dried tomatoes impart a flavorful punch to pizzas, salads, dressings, pastas, sauces and dough. And it’s available year ‘round.

The story of sun-dried tomatoes dates back to before modern canning methods were available, when Italians dried tomatoes on their roofs to enjoy their harvest year ‘round. While popular in Italy, sun-dried tomatoes’ acclimation in the U.S. came more slowly. First, it had to overcome being confused for a pimento. Next, chefs needed to learn how to use it. By the early 1990s, sun-dried tomatoes had become a popular gourmet ingredient. Today, they are so common that grocers have moved them from the specialty food aisle to the produce section.

“I’ve cooked with sun-dried tomatoes since the late seventies,” says Jeff Moogk, corporate executive chef at Sammy’s Restaurant, Bar & Grill in Henderson, Nevada. “Today, you can purchase them at your local grocery store or farmer’s market. Sun-dried tomatoes have a very distinct taste. The consistency is quite unique, too. It pairs well with a variety of dishes, particularly breads, pastas, salads and vinaigrettes.”

Paul Hamilton’s first exposure to sun-dried tomatoes was in the early 1990s while he attended the Penn State School of Hospitality Management in University Park, Pennsylvania. In 2011, when Hamilton opened his restaurant, PW Pizza, in St. Louis, Missouri, sun-dried tomatoes made the menu.

“We experimented with different variations before we opened as part of our menu development,” Hamilton says. “We found sun-dried tomatoes pair really well with anything that fresh tomatoes pair well with, like fresh mozzarella, basil, roasted chicken, sausage and salami.”

Today, the chef at Slice Pizza & Brew in Birmingham, Alabama, lists sun-dried tomatoes as a premium topping. (He charges customers $2.50 for it.)

In addition to a pizza topping, Brazelton recommends spreading sun-dried tomatoes on sandwiches or mixing into a dip. He serves a small plate starter consisting of thyme, roasted garlic and sun-dried tomatoes, mixed in olive oil with a side of crostini. Brazelton even prepares a sauce composed of sun-dried tomatoes, olives, artichoke hearts and browned butter that he tosses with capellini.

Sun-dried tomatoes are now available whole, halved, julienned or chopped. Product is even available in pastes and puree form. These products not only save prep time, but they also are available year-round and maintain a long shelve life. Further, product comes canned, jarred, dry-packed or oil-packed in cellophane.

“We purchase it as a dried, sulfite-free product and then cut and marinate it in-house using our own recipe,” says Moogk, who finds reconstituting brings out the sun-dried tomatoes’ full flavor profile.

Brazelton also purchases fresh product. “We only use fresh, bagged product that is naturally preserved,” he says.

While canned product tends to be less expensive than bagged, Brazelton says that “canned sun-dried tomatoes are of a lower quality due to heat
being added to the canning process.”

Many operators find the high price of sun-dried tomatoes evens out since operators don’t need to use much. “The flavor is robust and heavily concentrated, so a little goes a long way,” says Moogk.

For example, the one ounce of sun-dried tomatoes Hamilton places on the Yo Pauly pizza has a .44 cent food cost. To put that in perspective, the pizza’s total food cost is $3.66, and it sells for $15.79.

Given its longer shelf life, ease of use, versatility and flavor, it’s no wonder sun-dried tomatoes grace menus from coast-to-coast and remain a premium — yet approachable — ingredient.

Stretch out dough to form a 10-inch pizza crust. Brush dough and crust with olive oil. Top dough with mozzarella, garlic, sun-dried tomatoes, pine nuts, basil and goat cheese. Bake 8 to 10 minutes, until cheese is deep gold in color and crust is brown and crisp. Remove pizza from oven, cut into 6 slices and serve.