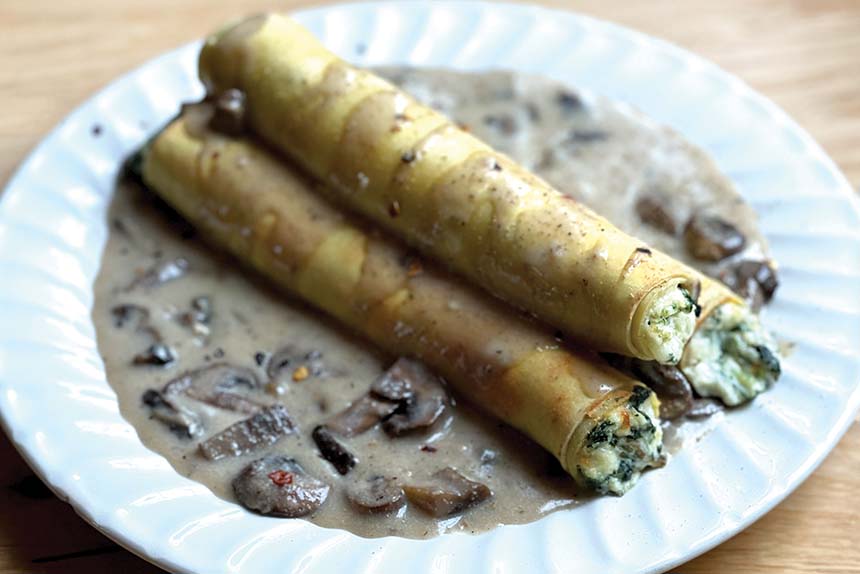 Stuffed Shells are Back!

Stuffed Shells are Back!

If stuffed shells were automobiles, they would be a flock of big, bright pink SUVs driving around town. In any restaurant, the delivery of this oversized, stuffed and sauced pasta is just as awesome a sight and usually followed by smiling faces full of wonderment. Putting this menu item into your restaurant repertoire adds that big “wow” factor but many questions need to be answered. Do I par cook the shells for fast service? Do I keep them filled or fill as ordered? How do I keep the shells from cracking or ripping when cooked? Would they sell well? What kind of stuff shell should I serve? To start, lets look at the history of stuffed shells.

Cooks and chefs in the old Italy didn’t make pasta to impress customers. Instead, each pasta shape and style were made with purpose. Some were made for meat sauces, and others made for soups and still others with more folds and grooves to accommodate light sauces. In Tuscany, the wide pappardelle were made to stand up to hearty meat sauces where the cavatelli, from Calabria, holds chunky sauces in its folded nooks. There are pastas shaped for the making of a single dish like lasagna, whose roots can be traced back to Naples in the Middle Ages and manicotti, which was originally made with crepes and made to serve with traditional Bolognese and béchamel sauces.

In 1875, Francesco Bottene invented the Bigolaro, or “Torchio,” a press that extruded thick spaghetti, rigatoni and eventually tagliatelle through a brass die. This enabled the making of pasta to spread throughout the Italian countryside. It also brought about other extruder inventions to make larger shapes like shells and cylinders. Here are some large shell-shaped pastas in different regions.

Conchiglie is shaped like a conch shell and has 3 sizes. The small Conchigliette, the medium Conchiglie and the Large Conchiglioni which was made for stuffing. The smaller shells are perfect for small, chopped salads and the larger and medium shells are used with Pasta e Fagioli Verde.

Caccavelle is a giant shell. In fact, this name translates to “pot” in Neapolitan dialect and is made by an artisan pasta factory in Gragnano, Naples. It looks like a squared pot with two small ears and is known as the largest pasta in the world weighing in at 50 grams. These monsters are usually made “alla Sorrentina’ and filled with tomato sauce, mozzarella, minced meat and ricotta.

Lumaconi has been made in the small town of Gragano, Italy since the 16th century. They are usually filled with minced meat, ricotta and béchamel but many versions include spinach, chicory, tomato and red peppers.

Shelled pasta does take time. That is the reason that most stuffed shells in Italy are made on weekends, family holidays and holy days where people have more time to prepare them. Almost all large shell recipes call for boiling the pasta ahead of time for 8 to 12 minutes.

Ripping: Some shelled pastas can get caught in the fast-bubbling pot upside down. This puts pressure on the sides of the shells and will produce small or large rips down the sides. This occurs with manicotti also when the ends of the tube get smashed against the bottom or sides of the pan.

Cooling: Make sure to quickly cool the pasta shells. And, unlike other pastas which benefit from the small starch coating that clings to the sides of the pasta and thickens the waiting sauce, large shells and tubes are much better rinsed under cool running water. This may sound sacrilegious in pasta circles, but this pasta cannot stick to each other, or it will rip. Some chefs even spray or brush with extra virgin to keep the shells from sticking to each other before filling.

Stuffed shells are such great canvas for filling that many different proteins and vegetables are perfect. There are some practical realities about the size and the way people will eat the large shells which preclude the way they have been prepared in the past.

Cheeses: Ricotta is usually king in stuffed shells. Pairing with cooked onion and spinach is a classic. Aged mozzarella is better than fresh because of a thicker, chewier bake that stays in the shells. Cheeses like Taleggio, Brie, mascarpone and Bel Paese will drain right out of cylinders and shells because of their water-like melt. Pecorino and Parmigiano completes any filling with an umami-laced flavor that compliments every meat and vegetable.

Vegetables: Cooked and minced vegetables are great inside stuffed shells. Pureed potato, yam, butternut squash and acorn squash make for a savory-sweet filling with cooked sage or spinach. Sautéed arugula and chicory can add a nice punchy balance to savory fillings and cream sauces. Tomatoes can add sweetness but will break down with cooking. Many stuffed shells are baked in tomato sauce to keep the shells hot, cooked and wet, instead of drying out.

Proteins: Minced meats and meat sauces abound in traditional Italian recipes for stuffed shells. Ground beef with pork is a classic combination with minced garlic and onion that is combined with ricotta for extra creamy stuffed shells. These can be baked with cream sauces or tomato passata for brilliant results. Lately, chicken or even vegan meats can be substituted for other proteins. Many older recipes add egg to proteins and cheeses to “set” the stuffing in the shells.