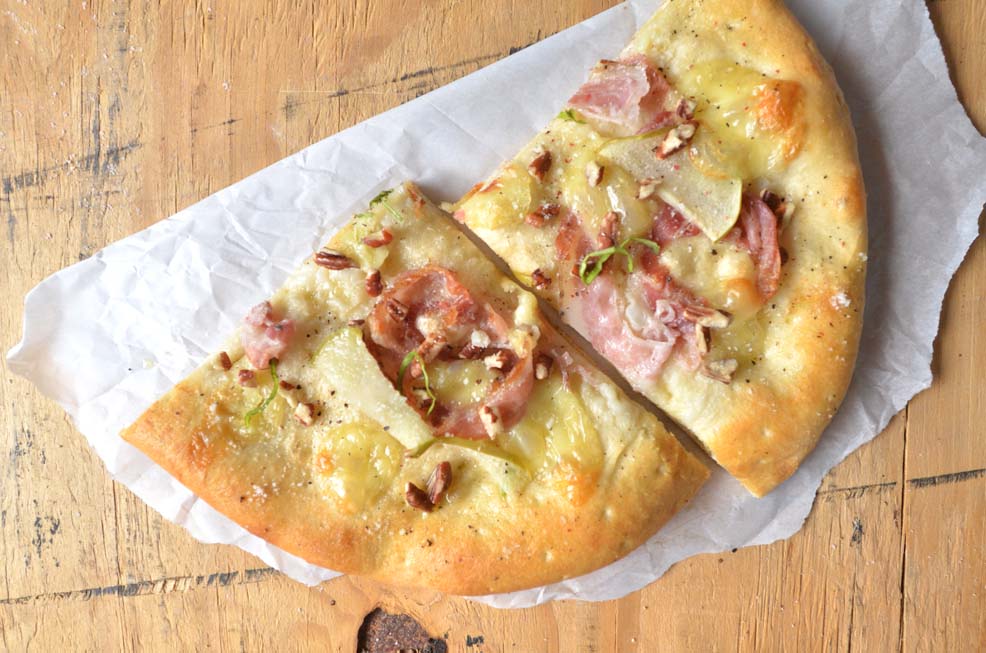 Bacon is great, but do you know your cured meats?

Guanciale, pancetta, speck, prosciutto and lardo have been topping pies in Italy for centuries, but they are only beginning to resonate with U.S. consumers. Like different cuts of steak, these cured pork products come from different parts of the pig, which impacts flavor and fat content. The curing process involves dehydrating cuts of pork with salt and spices, drying at cool temperatures, and aging at warmer temperatures. The result is a super-concentrated pork flavor with subtle complexities.

“Nothing makes me happier in life than cured pork,” says chef Domenic Branduzzi of Piccolo Forno in Philadelphia.

Branduzzi’s childhood summers spent in Italy and his family’s Tuscany pizza restaurant influences his style of pizza. He says pork toppings such as prosciutto and salumi are mainstays of Tuscany-style pizzas. Prosciutto is one of the most common pizza toppings as it originally comes from the central and northern regions of Italy. Taken from the leg of the pig, prosciutto can be dry-cured for months to years, giving it a slightly sweet, rich taste with a delicate silky texture.

Traditionally, prosciutto pizzas are topped with arugula or mushrooms with a red sauce. Braduzzi keeps these classic flavors on the menu and experiments seasonally with different combinations. He advises pairing prosciutto with subtle toppings so as not to overpower the meat’s flavors. In the fall, he creates a salty, sweet combination of fig and prosciutto. In the spring, he mixes it with fresh greens like asparagus with a truffle cheese. With more non-traditional pizzas, he prefers to use a lighter olive oil-based sauce. Since prosciutto can be eaten without cooking, Braduzzi adds it after the pizza has been cooked so it’s slightly warmed.

Another pizza he created as a childhood throwback uses speck, a type of prosciutto that is smoked as the final step of the curing process. With its robust and heartier flavors, speck goes well with sweet umami flavors. Braduzzi pairs it with mascarpone cheese and crushed tomatoes for a perfect trio of sweet, salty and acidic flavors.

Other chefs such as Mark Daverio from Thirteen Pies of Fort Worth and Atlanta pay homage to classic Italian flavors while also creating twists on classic bacon combinations.

“The fat content in cured pork products lends itself well to many applications,” says Daverio.

During his studies in Italy, Daverio loved the simple taste of shaved lardo on bread, and he wanted to translate that into a pizza topping. Taken from the back of the pig, lardo is cured fat often used to infuse decadent flavor. Thirteen Pies is known for their “Lardo Red,” a spicy remake of Daverio’s fond memories.

Daverio says an acidic tomato sauce cuts through the fat of shaved lardo pieces. He pairs it with a salty pecorino cheese and a fruity calabrian chili.

To make some of these unfamiliar products more approachable, he creates twists on classic combinations. Thirteen Pies’ “spotted trotter guanciale and farm egg” pizza is a play off bacon and eggs
using guanciale (pronounced gwan-cha-le). Guanciale comes from the jowel of the pig and has a strong, succulent roasted pork flavor with a delicate texture. He cooks the guanciale just enough to crisp and the server breaks the yolk of the egg at the table for a fun twist.

Since it has a stronger flavor, guanciale can hold up to pairing with other strong flavored toppings, cheeses, and sauces. “It’s part of chef’s job to expand a customer’s horizons,” says Daverio.

Daverio also incorporates pancetta into some specialty pies. Pancetta comes from the same area of the pig as bacon, but it is just cured, not smoked. Like guanciale, it needs to be cooked to barely crisp. He pairs it with the sweet tart granny apple and creamy Brie to balance out the fatty-salty taste of pancetta.

While some restaurants complement or balance flavors, Eatery A in Des Moines, Iowa, decided to go hog wild and incorporate three cured pork products into a super-savory pizza. The #4 on the menu combines lardo, guanciale and prosciutto into a signature wood-fired pizza crust with an olive oil sauce.

“It’s nice to have all the different cured meats there, and you can get little hints and aspects of what makes each one of them great,” says Chef Nic Gonwa, who adds that the lardo has an especially delicate flavor that melts into the pizza to create a buttery quality.

When deciding on a cured pork supplier, Gonwa says to look at the curing process, the breeds of pig and the pig’s diet. Many cured pork producers use heritage breeds that forage on various natural substances — these qualities give the cured meats subtle flavor complexities.

“With all the cured meats, you have to look for someone who knows what they’re doing and have it down to a science,” he says.

Gonwa notes that inconsistencies can come in the form of a too-salty taste or an odd texture if the meat didn’t cure long enough. When testing the meats, the flavor should have a good balance of salt and spice. Gonwa says the unlimited applications of cured pork products and good shelf life make them mainstays at Eatery A.

These types of cured meats can be used beyond topping pizzas. Incorporate them into pastas for a salty accent — prosciutto in a cream sauce. In fact, carbonara pasta traditionally uses guanciale instead of bacon. Substitute pancetta or guanciale for bacon in appetizers and other dishes. Remember: When cooking with these high-quality ingredients, less is more. Above all else, these cured meats are great on their own or paired with cheese on a charcuterie plate.

Iowa-based writer Stephanie Hall has covered food trends and topics for a variety of blogs, newspapers and magazines.