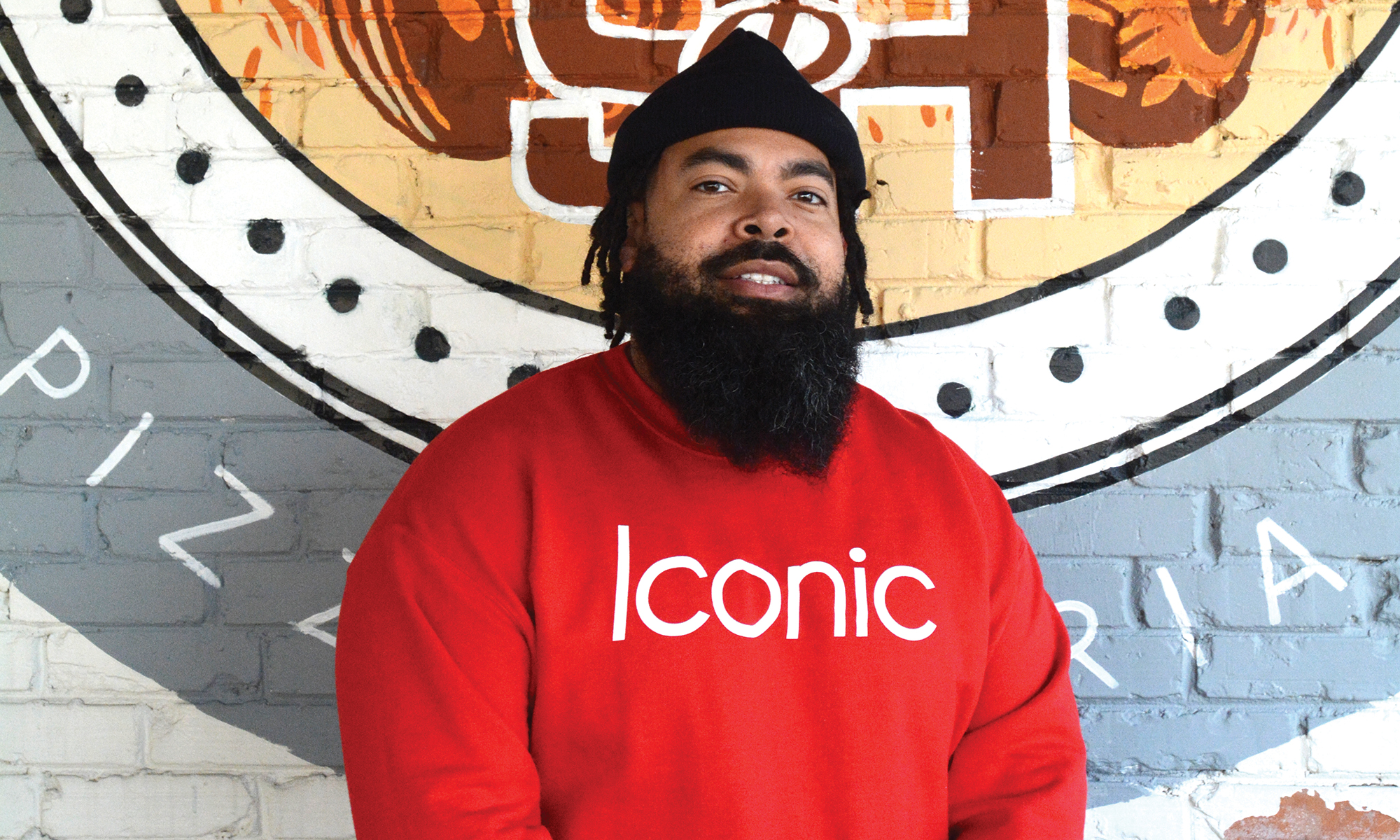 On the Road: Slim & Husky’s

On the Road: Slim & Husky’s

Culture and community aren’t just buzzwords for Slim & Husky’s. Far from marketing-speak, those focal points guide nearly everything the trio of founders do when advancing their Nashville-based fast casual brand. And that genuine approach is exactly why success follows them.

We sat down at the original Slim & Husky’s location over the winter with co-founder Clint Gray, who started the company with friends Emmanuel Reed and Derrick Moore (neither of whom were available for our interview that day, unfortunately). Gray graciously brought us up to speed on what the growing chain is all about.

But first, a little backstory. Gray, Reed and Moore lived together at Tennessee State University in Nashville. As college roommates tend to do, the pals often dreamed big of a future that saw them running a successful business venture together. And that’s exactly what they did. But the business they started couldn’t be further from where they have now landed. “We started a moving company first,” Gray says.

“We started it from scratch, built it up over seven years and sold it in 2017.”

The three took on quick-turnaround cross-country moves other companies didn’t want and found a niche — as well as profits. When it came time to sell, they already had an inkling of what was next.

“In the process of selling it we talked about starting up a restaurant,” Gray explains. But there was only one problem: they didn’t know anything about running a restaurant business.

“The restaurant industry was booming in Nashville right then,” says Gray. “And being local guys, we wanted a piece of it. When we had the moving company and were driving all around the country in our trucks, one thing we always did on the road was eat pizza. It felt like we were professional amateurs when it came to the pizza game. We could talk pizza all day. We were always seeking out the best pizza shops.”

Turning their love of pizza into their next profitable business became the plan. The trio bought an old garage in a neglected neighborhood and went to work experimenting and learning.

“We turned it into a science lab for pizza,” Gray says. “We didn’t know how to make pizza. We never worked in a pizzeria. But we knew a guy who was a chef. He didn’t know how to make pizza either, but he was a chef and knew he could figure it out. We bought some refrigeration units from an old Quizno’s franchisee and some old sandwich tables, plus an old mixer and a new oven and got to work learning. Our garage had no hot water and no heat. But it had lights. And we installed a three-phase electrical into the building to run the oven. We literally had to run a hose from the bathroom sink to the mixer. We microwaved our water to the right temp to mix the dough and we figured it out like that over time.” 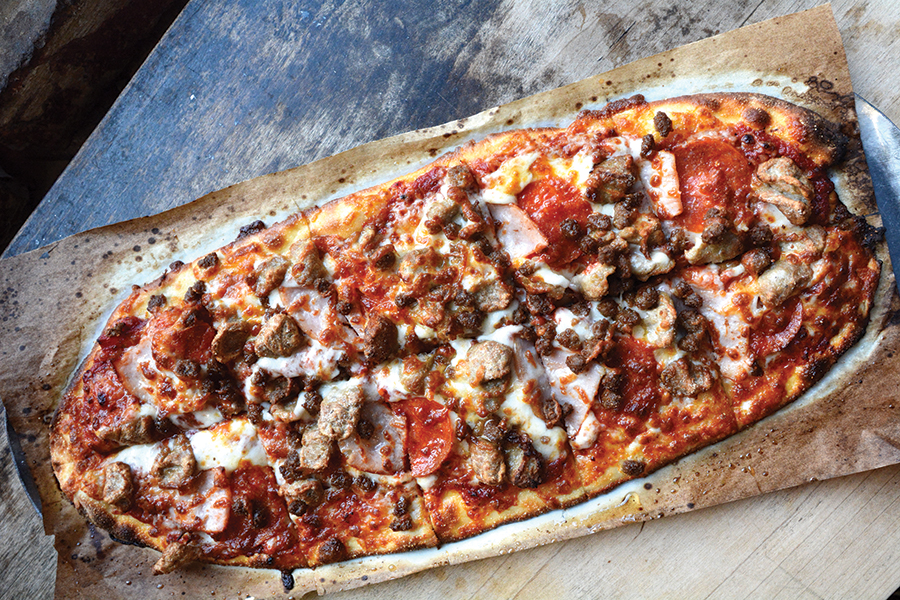 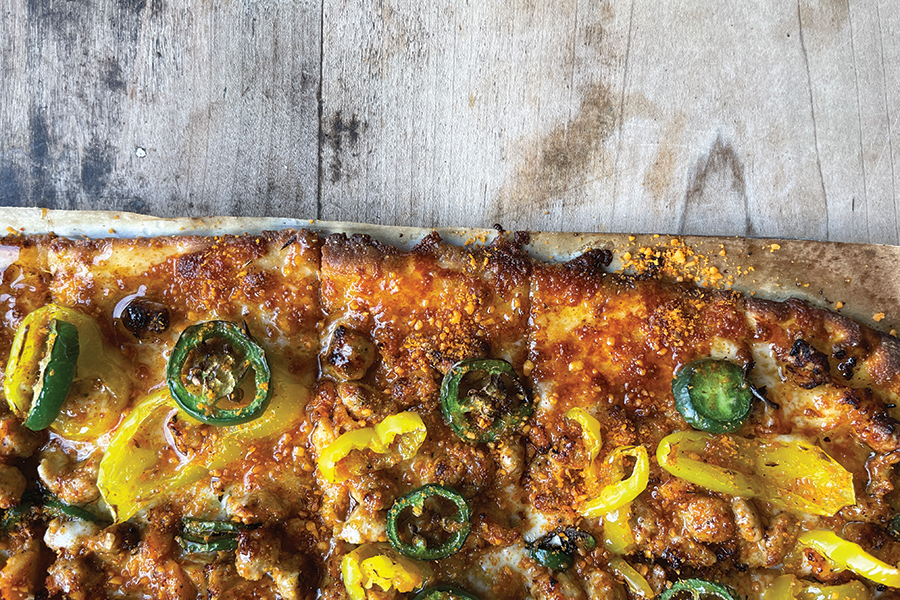 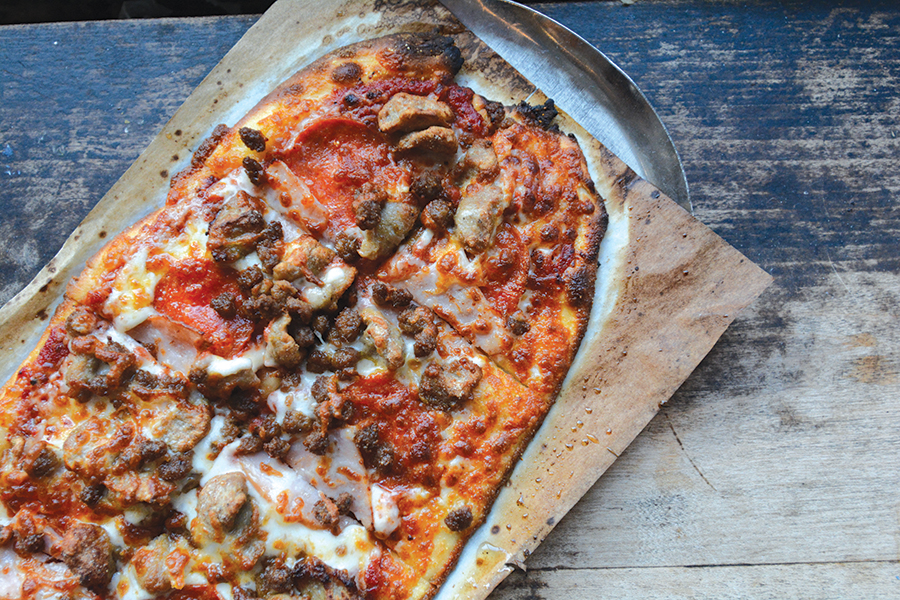 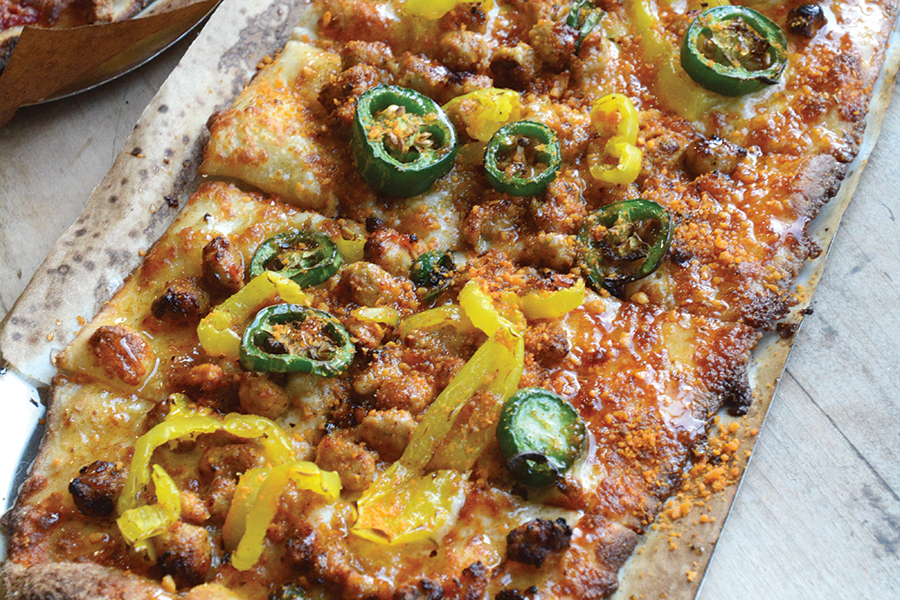 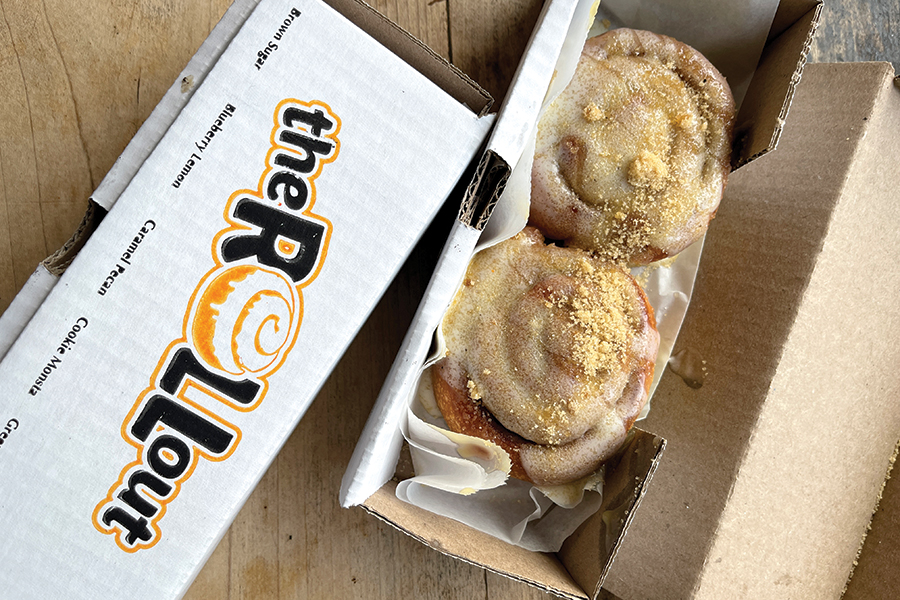 Everyone has to start somewhere.

Beginning with microwaved water and a hose running from a bathroom sink in an old garage … the three business partners figured they had nowhere to go but up. And they were absolutely correct.

As they were figuring out a dough formulation and experimenting with a menu, they were also planning how they could become an integral part of the community, help turn around a neighborhood’s fortunes and build a lasting brand.

“We saw an opportunity to come in and make a difference in an underserved community,” Gray says. “This neighborhood you’re sitting in right now is a testament to what happens when companies invest in neighborhoods that need it. There wasn’t an open business for 16 blocks here. There was nothing open. It was all boarded up. Old homes and old grocery stores that had been closed down. But being from here, we remember the street when it was really something. When there was commerce. But just like every city, crime and a lack of resources and a lack of support from the city turned this neighborhood into what it became. And we were on a vengeance to bring it back.”

Before Slim & Husky’s ever even opened, there was demand for the product. Word got out about what was going on in the garage. The neighborhood, meanwhile, was going through a tumultuous time and a community leader asked Gray, Reed and Moore to drop by a community meeting with some pizzas.

“We walk into the community meeting, and they were literally bumping heads when we walked in,” says Gray. “People were screaming at each other, cussing each other out. Just two different visions of the community within one meeting. Here we walk in with these pizzas. We don’t even have branding on the boxes. They were just plain boxes. And they were looking at us. We told them we wanted to see what they thought about our pizza. They started eating and before long the tension started calming down. Next thing you know they were discussing issues and we became part of the meeting. At the end they wanted to know if they could have the next meeting in our garage. They started having the meetings in our pizza lab.”

The momentum built from that not only fortified the Slim & Husky’s bond with the community, but also gave the trio plenty of feedback on their product as they made tweaks along the way.

“When we finally opened, all these people were invested and they showed up in a big way and were behind what we were out to do,” recalls Gray.

Slim & Husky’s opened with a hip-hop theme because the three founders grew up on hip-hop artists and movies such as “House Party,” but that theme also resonated well beyond their personal tastes. It seemed to appeal to almost everyone. And it fit right into the fast-casual dining focus as well. 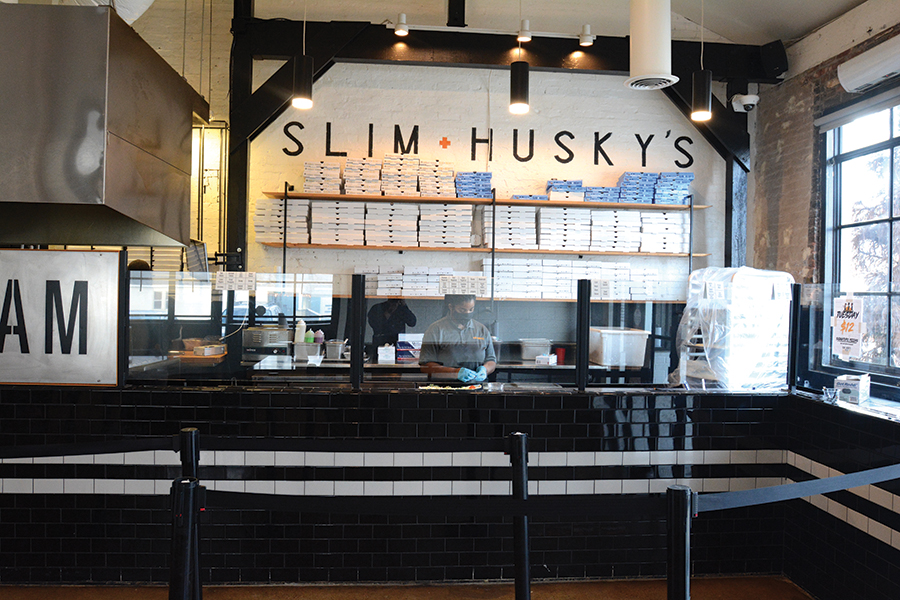 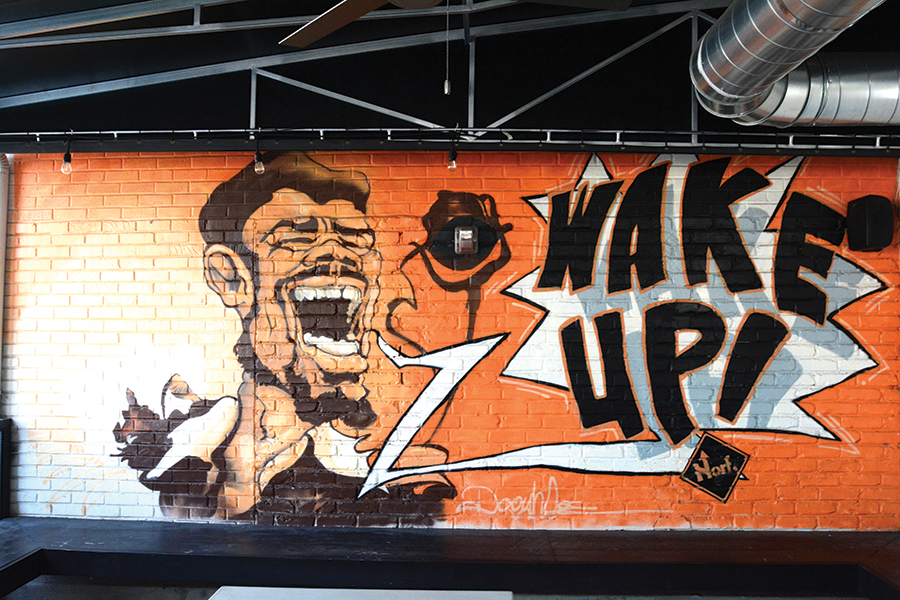 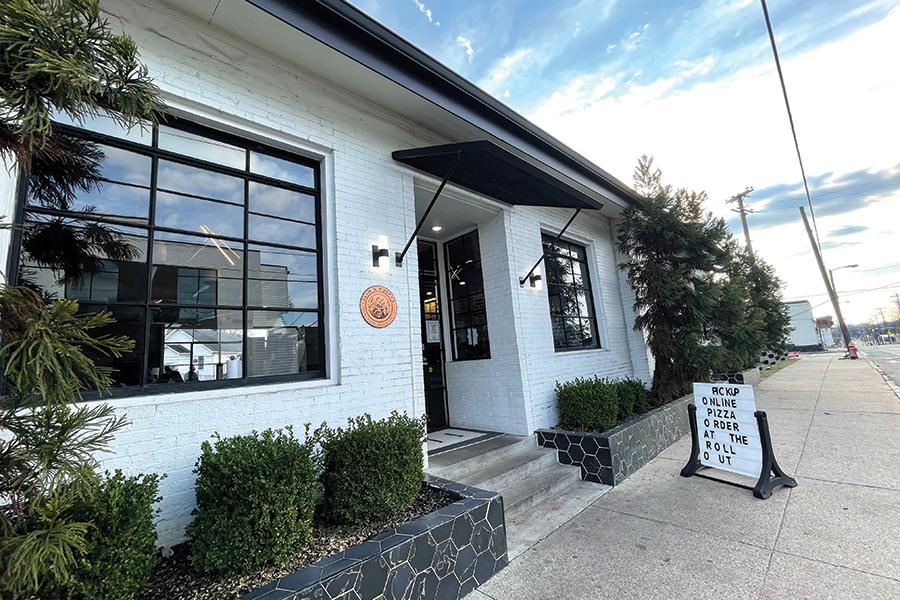 “The simplicity of fast casual, build-your-own-pizza appealed to the neighborhood we were trying to support,” says Gray. “If you drive just a few minutes from here into Germantown, you can get plenty of high-end places to sit down with wine and spend a few hours. You can get coal-oven pizzas. Whatever you want. We were serving a different community. We knew a fast casual would work here. What we noticed around the country when traveling with the moving company, a lot of places that were doing fast casual seemed to be focused on volume but weren’t so focused on flavor. We thought there had to be a way to merge the two.”

The company has nine stores at the moment — six in Tennessee, two in Georgia and one in California. Being a southern-flavor focused brand, Gray says he and his partners will look to grow in the south and southwest. “We’re slow rolling it and playing the long game,” Gray says. “We have different views on who we are as a pizza company compared to other pizza companies. It’s going to take us a little longer to get to where we’re going because it’s not just about the pizza for us. If I had somebody right now who wanted to write me a check for $20 million and they were the right fit for our brand, then maybe we would go out and open 30 or 40 stores. But we’re growing slowly and intentionally.”