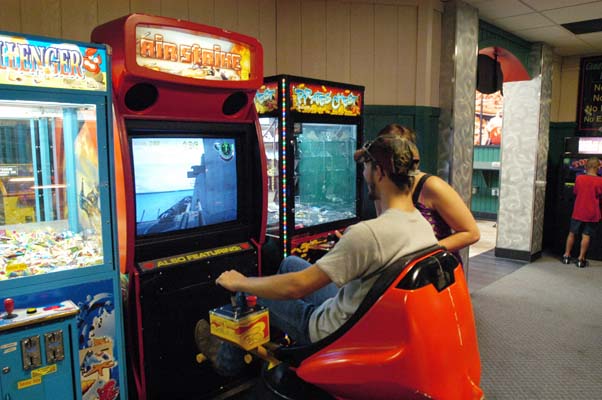 Are video and redemption games right for your pizzeria?

People like to compete. They enjoy keeping score. Most are enthralled by the sense of achievement — that warm, fuzzy realization they qualify as “winners.” As former Green Bay Packers coach Vince Lombardi asked: “If winning isn’t everything, why do they keep score?”
Make no mistake, children grasping a handful of hard-earned tickets and effervescing with self esteem are satisfied customers.

“There’s a lot of joy in watching little kids have fun,” says Sandi Adams, co-owner of a large Gatti’s Pizza in Bedford, Indiana. “We use the redemption ticket system for our games because kids love showing off a big bundle of tickets to their friends and parents.”

Children do adore prizes. “If they can win gum or candy, they’re usually happy,” says Bill Budrow, owner of Chico’s in Lynwood, California. “There’s something very satisfying about seeing a child win a beautiful surprise, then watch the parents get excited for them.”
Though they employ diverse strategies, both Adams and Budrow are sold on the value of amusement games to attract customers to their respective eateries.

“We have approximately 65 games,” Adams explains. “We purchase our own machines. They can be hard to maintain, and that can be time-consuming. One employee handles most of the machine maintenance, and I take care of the stocking and the doling out of prizes.”

Since Gatti’s operates as a buffet-only eatery, patrons must purchase food to gain entrance to the restaurant’s game room.

“Our customers purchase tokens to play the machines, and they are rewarded with tickets they redeem for prizes,” Adams says. “Ninety percent of our machines require tokens. We purchase our prizes through a vendor.”

Budrow has been in the business for 52 years and once operated 26 stores. He now focuses his energies on the original Chico’s in Lynwood. His store covers nearly 9,000 square feet. The main dining area features a jukebox, while a second room is furnished with 10 pool tables and other amusements. Budrow owns the jukebox and pool tables.

“All my games and prizes are supplied by a vendor,” Budrow says. “And, all the machines are coin fed so I don’t deal with tokens.”

Unlike Gatti’s, Chico’s does not offer a buffet.

“You order from the menu here,” Budrow says. “We used to be strictly pizza, then we added spaghetti and lasagna. We decided to try chicken wings, and now we’re selling 50 cases a week.”

A large percentage of his patrons order pizza to go. But not all his customers are concerned about the menu. “We have kids who come in right after school just to play the games,” Budrow says. “They don’t eat, but that’s fine. We don’t have a problem with that at all.”

Budrow reaps half the intake from the leased machines. “Of course we get 100 percent from the 10 pool tables, and they stay busy,” he adds. “In fact, we usually have a waiting list to play pool. There’s hardly any maintenance involved with them.”

Both Adams and Budrow say supervising the machines and those playing them is not as laborious as some would imagine. “We don’t have a lot of trouble,” Adams says. “Every now and then a bigger kid will climb onto the carousel, or someone will start shaking a machine.

“When kids get excited, they tend to run. So, occasionally we remind them not to run.”

Budrow assigns a manager to casually patrol the premises.

“We really don’t have problems with misbehavior,” he says. “I don’t think we’ve ever had a game or machine ruined by someone spilling a drink on it.”

Adams says, though Gatti’s attracts children with its wide variety of games, not all of her patrons are pint-sized.

“We have lots of regulars, many adults, that love to play the games,” she says. “Some of our other adult customers have been coming here for years but have never visited our game room. They just come to enjoy the pizza, pasta and salad.”

“The games are definitely a good draw for the kids,” Budrow says. “I’d say 95 percent of our customers are regulars. They’re loyal, and they represent a good swath of the community.”

Chocolate Factory and Oscar’s Wild Gumball Machine are among the most popular machines at Gatti’s. “It seems most little boys and girls like the same games,” Adams says. “The ‘tweeners go for games that pay the most tickets. They’re definitely in it to win it.

“The high school kids play basketball and air hockey, and the adults like the racing machines and hoops. They play mostly for bragging rights.”

“They never get tired of playing that one,” she says. “It’s surprising how long the games remain popular. As long as you keep the machines in good working order, people are going to play them.”

Both Adams and Budrow noted positioning of the games is vital.

“We keep most of our machines in the game room so people who want to eat aren’t distracted by the noise and kids,” Adams explains.

Chico’s aligns its machines to permit a free flow of traffic. A banquet room is available for diners preferring a quieter setting.

Adams says rotating machines also enhances profitability. “We know exactly how much play we get and how many tickets each game dispenses,” she explains. “We’ve learned that just by moving a game to a new location you can impact the kind of play it receives.”

Though the prizes at Chico’s are displayed within the machines, winners at Gatti’s trade in tickets for treasures at a well stocked and brightly decorated gift center. Some children amass tickets over several visits before cashing them in for high-ticket items.

“We offer an account system,” Adams says. “Some parents use it teach their children the value of saving. Of course a lot of the little ones want their prizes immediately.”

While some managers allow customers to supplement cash with tickets, Adams does not.
“We don’t negotiate with tickets,” she says. “You need to collect the right amount of tickets to claim your prize.”

Budrow says games play a significant role in his business model. “They are very profitable,” he explains, “but our food and drinks have always been our main draw. I don’t care how many games you offer, if the food is lousy you’re not going to make it. Kids will eat anything, but adults want a good quality product.”

Bob Bridge  is a freelance writer based in Bedford, Indiana.