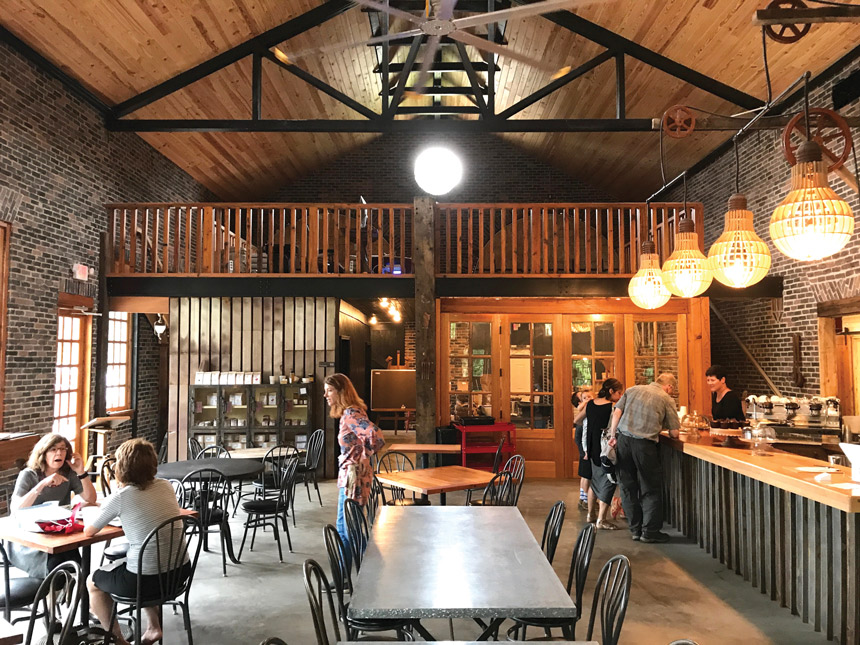 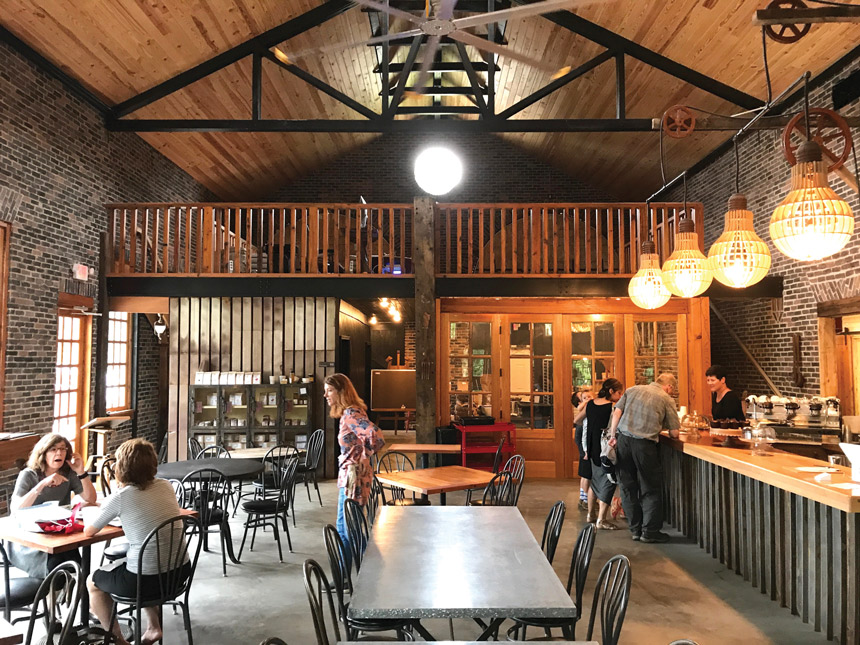 Industrial duct work, wooden beams or a mixture of both reveal a look that is both modern and somehow a nod to the past. Restaurants that sport an exposed ceiling are on trend with design and present their customers with a space that is open, striking and distinct.

“The Industrial Modern look is very trendy right now, so the biggest advantage an exposed ceiling brings is an interesting aesthetic,” says John Linden, Los Angeles commercial interior designer and owner of Mirror Coop, a furniture studio. “Restaurants often are differentiated by their décor and ambiance, so having an interesting ceiling can be part of that advantage.”

Exposed ceilings work as a physical expansion of space as well as a design aesthetic that speaks to a restaurant’s image, theme and style.

“From a design point of view exposed ceilings create more volume and more drama in the space,” says Kevin Horn, CallisonRTKL designer and vice president. “In existing buildings, exposed ceilings also create a feeling of authenticity. Exposing the raw materials and structure expresses a sense of the building’s history.”

By opening up the vertical space of a restaurant with an exposed ceiling, operators will present their customers with a room that seems bigger and feels cooler, according to Linden.

“Higher ceilings allow for more heat to rise to the top of the room, keeping the temperature down in the main dining area. This can save on the electrical bill and also cuts back on ambient noise from air conditioners,” says Linden.

Although an exposed ceiling adds drama and style to a restaurant, it can also present unique challenges — especially in terms of heating and cooling expenses and maintenance — for operators who opt for such a signature design element.

“Exposed ceilings lose many of the perks that drop ceilings have, including using insulating materials that can protect against heat loss and noise pollution,” Linden says. “With an exposed ceiling, you are forced to use whatever the original framing of the building has, and for older buildings this can be outdated and lack the benefits of more modern construction and materials.”

Plus, cleaning an exposed ceiling requires extra attention and depending on how high the ceiling reaches, a ladder.

“These ceilings can also be harder to maintain given all the exposed surfaces where dust can collect,” says Horn. “And, when light fixtures are located higher than usual, replacing light bulbs require more effort.”

Because an exposed ceiling literally opens up a space, which gives guests a lot of breathing room, it can also feel a bit cavernous with sounds from every inch of the restaurant colliding with each other; and, even though an exposed ceiling can be stunning, exposed wiring will give guests an uneasy impression.

“If the project is in an existing building, exposing a ceiling may be challenging and costly should existing MEP, electrical, etc., need to be relocated to create the desired effect,” says Horn. “More attention needs to be paid to the organization and routing of MEP and electrical components. Ducting, in particular for HVAC, must be considered part of the design. Noise control can be an issue and may need to be addressed by incorporating smaller, floating, ceiling ‘clouds’ to create some level of sound absorption.”

Linden adds that even though electrical and wiring do pose challenges for operators, an exposed ceiling is more transparent for spotting issues with the electrical system and may save your guests from a messy environment if and when a problem arises.

“Electrical or other wiring problems are often much easier to address since the ceiling itself doesn’t need to be removed in order to see what’s going on,” Linden says. “The debris that often comes from removing ceiling tiles, etc., also doesn’t affect the dining area.”

In addition to electrical, wiring, and sound issues, operators should be cognizant of wafting aromas if their restaurant shares any walls with neighbors.

“Restaurants located next to or below other residential or business spaces definitely have to consider this. One issue that has come up is the smell from the restaurant creeping into adjacent spaces,” Linden says. “Even if the food smells great, other tenants may complain. Ceiling tiles and insulation can mitigate some of this problem.”

In addition to the labor and cost of rerouting an HVAC system and installing proper lighting, operators have to consider the cosmetic cost an exposed ceiling incurs.

Creating a memorable, inviting and signature style for your restaurant is always worth the investment, and with every element, whether it is funky seating, cool lighting or an exposed ceiling, operators need to do extensive research on whether an on trend or trendy factor is worth the price and effort, has the staying power to become a classic look, and most importantly, if it truly aligns with their restaurant’s vibe.