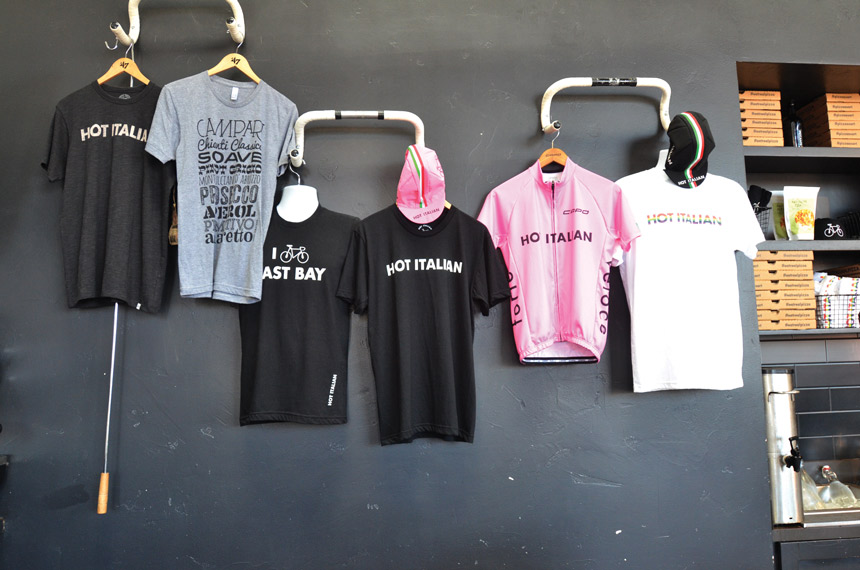 Pepper the community with your brand

The merchandise offerings from Hot Italian and Sizzle Pie couldn’t be more opposite.

Sleek and fitted, the T-shirts, hats and other sundries at Hot Italian convey an elegant, chic, Calvin-Klein-esque vibe to upscale customers and bicyclists who frequent restaurants in Sacramento, Davis and Emeryville, California.

By contrast, intricate, colorful art covers the shirts and skateboards alike at Sizzle Pie. They evoke spellbinding images of metal band labels and the edgy free-spirit lifestyle of Portland and Eugene, Oregon (and Seattle, Washington).

But although dissimilar, these two restaurants are ahead of their competitors with one common strategy: Repetitive branding.

It’s at the core of every merchandising marketing plan: Remind customers of who you are repeatedly with advertisement that they themselves carry throughout the community, says Consumer Psychologist Michael Barbera of Barbera Solutions in Pinehurst, North Carolina.

“Brand impressions are vital for any business, but even more so for the food industry,” Barbera says. “The average person will drive by a new restaurant 22 times before they go inside. That’s the challenge they’re faced with.”

Merchandising, Barbera says, gets the consumer to “memorize” your brand. It gives them that nudge when they’re debating whether to hit your place or someone else’s. This is why it’s important to have a “repetitive” branding strategy –– recognizable merchandise peppering the community.

“It’s worth it if it’s done correctly,” he says. “It has to be designed in a manner that the consumer wants to wear.”

Here’s how to do it right.

• Make it swag. If you’ve ever gone to a convention, you already know about cheap trinkets collected at booths –– plastic key chains and water bottles, stamped with an obscure logo. Chances are that even if you’ve picked up a free T-shirt at a convention, you’re using it to wash your car. As for those trinkets? They’re sitting in a landfill, Barbera says.

“If you sell poor-quality stuff or have a large logo on it, the consumer feels like they’re a walking advertisement for the company. You have to find out what a consumer can use, wear or touch that doesn’t make them feel like a walking billboard,” Barbera says.

“It’s not just our branded stuff we sell, but also brands that fit our culture, like Castelli (competitive cyclist apparel) and motorcycle jackets,” Lepore says. “We work hard at sourcing good quality. Our t-shirts are either American Apparel or are more of a lifestyle brand. They’re fashion fit, and people can relate to them personally.”

• Make it you. When the guys at Sizzle Pie launched their first restaurant, others told them that adding a merchandise line “was not a smart business move,” says Co-owner Mikey McKennedy.

Five years later, McKennedy and a staff of three full-time artists –– Matt Stikker, Orion Landau and John Black –– work to come up with the unique designs that define their establishment.

“We just wanted to create a solid aesthetic that was reflective of our personalities and who we are,” McKennedy says. “We’re sarcastic kids from the metal, low-brow, art culture. It’s a part of who we are, and our personality is who we are. It’s not a thing where we thought, ‘Let’s create eight different T-shirts and products.’”

Bearing that in mind, don’t try to copy someone else’s style. Incorporate your personal interests with what also resonates with your customers, McKennedy says. If you’re unsure about an idea for a merchandised item or the style, go slowly to start.

“If you have a cool idea, try it out, but don’t keep trying to put out more shirts if you’re not selling them. Come up with one or two things and run with them and see if it sticks. Start out slow and think about who you are and what your aesthetic is — what you want people to take away from your restaurant. If you stick to that, you will build into something,” he says.

• Make it a destination. Your goal is to get people to want to wear your items because it’s prestigious to be seen in them. Marketers call this “the social proof” concept –– proof among customers that they’re part of the crowd that goes to “the cool place,” Barbera says. For example, the Salty Dog Café is a popular eatery in Hilton Head Island, South Carolina. Their shirts and Jeep wheel covers make their way up and down the East Coast. People who sport them are, in effect, telling others that they’ve vacationed at Hilton Head and hung out there.

Even Lapore at Hot Italian has a shirt from the Salty Dog, which a friend sent her as a gift. She understands the appeal of using merchandise to make your pizzeria a destination, even if you’re not in a vacation or resort area. Hot Italian does it with their simple and clean line-drawing graphic of a bicycle, boasting the popularity of their restaurant with the cycling community.

Customers who peruse the merchandise at Hot Italian take home a memory, as well as a full stomach. And when they wear the merchandise out in the cycling community, it feeds into the restaurant’s popularity.

“With the cycling community, we have a strong affiliation — like we’re part of the team,” she says. “We sponsor bike teams and clubs and put on a bicycle film festival. So it’s who we are.”

When designing your merchandise, don’t be shy with color, says Consumer Psychologist Michael Barbera. In fact, he urges, the bolder, the better.

“If you drive down any major road, you’ll see that all fast food companies have one thing in common: Their logos are red, yellow or a combo of the colors. That’s because red and yellow trigger hunger,” Barbera says.

Your merchandise should ideally stick with that color scheme, and the logo or tag line should make customers feel like you have a “connection” to your pizzeria, he says.

If you include your Web site, “put it in a spot where it doesn’t look like an overt advertisement. Starbucks has the ‘You are Here’ mug. The color reflects the color of the state, and it has a cartoon image of things in that particular city. The handle in small print says, ‘Starbucks.’ It builds the customer experience,” Barbera says.

Heidi Lynn Russell specializes in writing about the issues that affect small business owners. She is a regular contributor to Pizza Today and lives in Lexington, Kentucky.