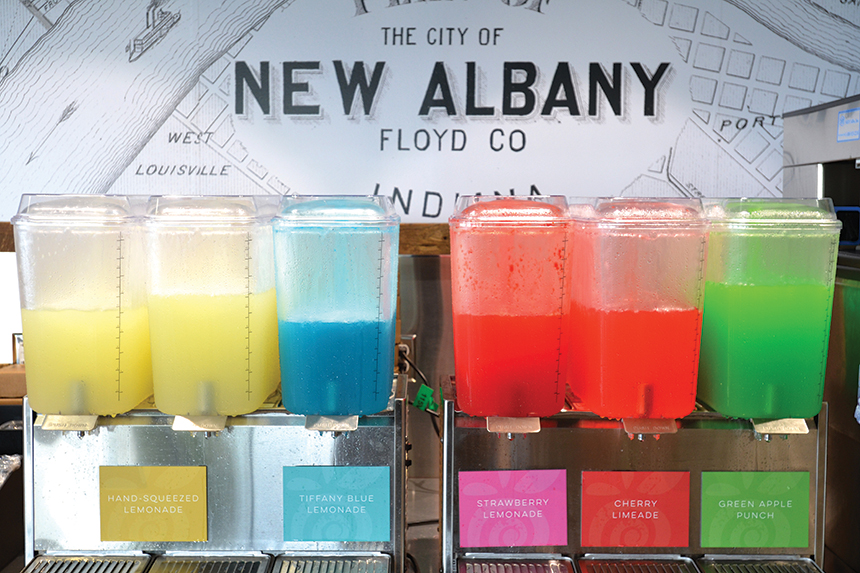 Buffets, salad bars and even fountain beverages are adapting to safer formats

Restaurants with buffets did not disappear during the COVID-19 crisis, but they did adapt. As pizzerias reopen their all-you-can-eat pizza, salad bars and free-refill fountain drinks, the setups look different. Operators say that although there are costs involved in making changes to everything from buffet table setups to utensil holders to whether grated cheese is available in a shaker, the actions are necessary to keep staff and customers safe.

Cinzzetti’s Italian Feast, which has locations in Colorado and Kansas, reopened its restaurants with some changes to the service. Plates are available at the table as diners are seated, and at each food station. “Plateware used to be in one spot,” says Bobby Fitzgerald, cofounder and partner of Scottsdale, Arizona-based Slatebridge Restaurant Group, which owns Cinzzetti’s and other restaurants. “Now we have plateware throughout the dining room, so people are not congregating.”

The biggest change is in the serving utensils. Each guest takes a clean tong from a basket, helps themselves to a slice of pizza or other item, then drops the tongs in a container to be washed. “We had to invest in 3,000 pieces of each utensil,” Fitzgerald says, adding that the amount was quadruple the usual utensil order. “We have a dedicated staff to rotate those out to clean. You really have to stay ahead of it.”

Desserts are pre-plated in individual servings, so customers take one of those instead of scooping out the apple crisp, tiramisu or other treat. Cinzzetti’s made additional changes such as installing Plexiglas barriers between the kitchen and customers. Tables were removed and put in storage, and they might not come back even as capacity limits change. “You have to think not just about CDC guidelines but about comfort,” Fitzgerald says. “People are walking and carrying plates. You have so many customers getting up and going to the buffet, you’ve got to give them space to walk by.”

Making sure guests are comfortable is crucial as customers return to dining inside restaurants. That’s especially true in buffet concepts, which media reports hinted would not recover post-pandemic. In fact, Fitzgerald says, people are very eager to return to buffets, and reservations at the Northglenn, Colorado location were full for days when it reopened this past March, after being closed for a year. “The first thing you have to remember when people come back is they didn’t starve while you were closed,” he says. “They are going out for the experience, so what can you do to make sure they get that experience.”

For some, a fun experience means arcade games. The Amazing Pizza Machine in Omaha, Nebraska has a buffet and a large selection of arcade games. When the establishment had to close for 16 weeks at the start of the pandemic last year, it gave leadership time to evaluate the various changes it would have to make to accommodate social distancing and other protocols. The buffet reopened in July, and to adhere to local mandates had to switch temporarily to cafeteria-style service. “You come down, tell us what you want, and we serve it you,” says Allen Wachter, executive vice president. “We had to invest in lots of plexiglass and wall off customers’ ability to access their own food.”

Eventually the local mandates changed and The Amazing Pizza Machine was able to revert to self-serve, with safety enhancements. The buffet area has stanchions to control the flow of traffic, and there are gloves available for customers. “It’s optional, not required,” Wachter says. “We see a lot of folks wearing them.” The silverware island is gone, and staff hands out those items. Customers can help themselves to fountain beverages, but they must start a new glass each time, instead of refilling their glass.

The buffet and arcade games are popular, especially as families emerge from pandemic isolation. Every other game is turned off to encourage social distancing, and there are hand sanitizer stations throughout the space. In online post-visit surveys, customers indicate that they appreciate the safety measures. “We ask, ‘Do you feel like the COVID protocols kept your family safe during your visit?’” Wachter says. “We get 80 percent, or four out of five stars.”

While buffets have been popular for decades, one of the newer self-serve variations is with wine and beer. The owners of Fringe Pizza in Boulder, Colorado, planned to open Fringe, A Well-Tapped Eatery with a self-pour draft system. The idea was that customers would check in, get a wrist band that they would then scan at the taps to open and meter the beverages. The customer would be charged by the ounce, and could sample several beers and wines. The eatery opened in October last year, during the pandemic, so the self-pour feature was put on hold. “We have not been able to use it as intended,” says chef and owner Nate Rajotte. “We have traditional table service, where someone orders beer or wine.”

Rajotte says the local health department did not allow the restaurant to offer the self-pour system. When that changes, some customers might still feel uncomfortable helping themselves to wine and beer. “We will have to offer some type of hybrid,” he says.

Other items, such as salt, pepper and cheese shakers are not on the tabletops. That’s partly out of safety and partly because the food is seasoned in the kitchen. “It was always my intention that we don’t have condiments on the table,” Rajotte says. “But if someone asks for grated Parmesan or Calabrian chilis we give them some in a ramekin.”

Others say they made some changes, big and small. Sam & Louie’s Italian Restaurant and New York Pizzeria, with locations in Nebraska, Kansas, Montana, Iowa and Colorado, transitioned to carry-out and delivery at locations in larger cities, but locations in small towns maintained a strong dine-in business. “We removed the shakers and provided packets for Parmesan, pepper flakes, salt and pepper,” says Michael Nolan, president. “We are hoping that as vaccines are administered everything will return to the way it was very soon.”