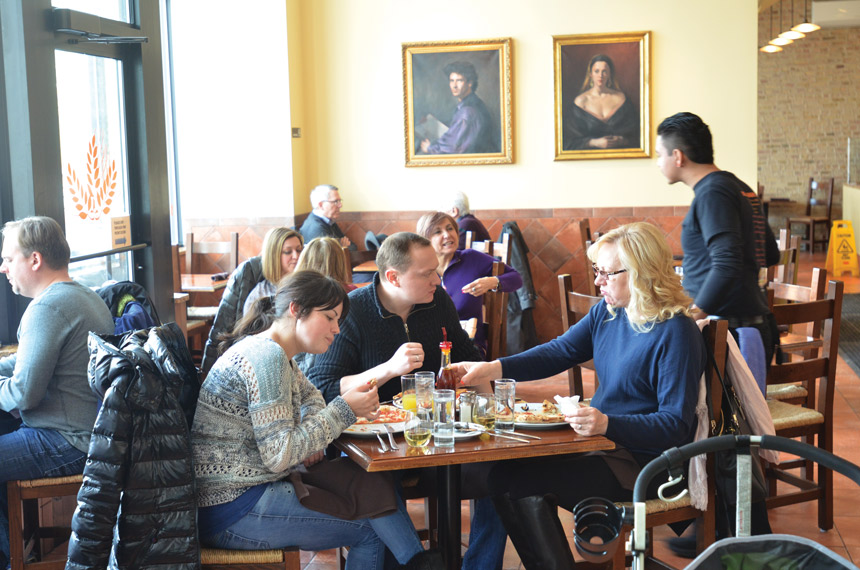 Do you need a front-of-house manager?

Do you need a front-of-house manager?

(And if so, how do you bring just the right one on board?)

When asked what he’d do without his front-of-the-house manager Stacie Horton, Rick Drury doesn’t hesitate to shake his head.

For the last seven years, Horton has been Drury’s dining room lynchpin at Precinct Pizza, his 11-year-old, Tampa-based eatery that does more than $2.2 million in annual revenue from its 92-seat restaurant. Horton greets guests, tends to parties, routes orders and trains and schedules servers. In a pinch, she can even jump into the kitchen and make pizzas.

“When Stacie’s on the floor, you know she’s in charge,” Drury says.

When a particularly finicky 50-pizza order dropped into Precinct Pizza with but 24 hours notice, for instance, Horton handled everything from the delivery to how each pie should be cut.

“There were a number details on that order that could’ve fallen through the cracks, but they didn’t because of Stacie,” Drury says. “Her attention to detail is what sets us apart from most places and without her and the team she leads, we wouldn’t be doing the volume we do.”

Not necessarily so, says Carmelo LaMotta of LaMotta’s Italian Restaurant & Pizzeria in Fort Myers, Florida. In a pizzeria environment offering dine-in, delivery and carryout, with orders going in and out doors front and back, customers coming and going, phones ringing and new employees learning the ropes, GMs can easily get buried and overlook front-of-the-house details. Cups sit empty, dirty plates pile up and the restaurant’s brand suffers.

“People want an experience in restaurants today,” says LaMotta, also a restaurant consultant. “That has a lot to do with the food being 100 percent on, but the service absolutely has to be there from how customers are greeted to the attentiveness of staff.”

That’s why LaMotta appointed himself front-of-the house manager at LaMotta’s, the 150-seat operation his parents Salvatore and Maria founded nearly 40 years ago, and why pizzeria owners like Drury have made the investment in a FoH manager.

“You need someone to look over the entry of customers into the business, someone to be singularly focused on the customer experience beyond making or routing food,” Drury says.

At LaMotta’s, for instance, LaMotta himself –– or his parents –– greet every guest at the front door, even offering a glass of water on hot days to cultivate a positive first impression.

“This changes the whole attitude. The customer feels special and taken care of, not just like they’re there to pay for a meal,” says LaMotta, acknowledging that such attentive service would be challenging to accomplish had he tried to run back and front-of-the-house operations simultaneously.

Also in his role as front-of-the-house manager, LaMotta makes sure every guest leaves with a LaMotta’s menu or bounce-back offer, while he also oversees scheduling, shift cuts, table touches, employee or customer issues, server training and general hospitality such as providing kids crayons, coloring books and balloons.

That’s a rather typical job description for a front-of-the-house manager, though other pizzeria owners might also charge the manager to handle the hiring and dismissal of dining room personnel as well.

Landing the right front-of-the-house leader. In an ideal world, Master Pizza president Jeremy Galvin says every one of his seven locations in northeastern Ohio would feature one GM capable of quarterbacking back-of-the-house and front-of-the-house operations simultaneously and seamlessly.

“But those types are few and far between,” Galvin admits.

Instead, Galvin is often dividing up the roles, reverting to an age-old restaurant industry practice when he looks to bring on –– or elevate from within –– a front-of-the-house manager: target personality first. Thereafter, Galvin can educate the manager on the role’s intricate particulars, such as scheduling or food-and-drink pairings.

“First and foremost, I want someone with a positive outlook, someone truly interested in people and invested in ensuring guests have a positive experience,” he says.

And when seeking that manager, Galvin adds, it’s important ownership be honest with themselves about their strengths and weaknesses, particularly if they would not define themselves as a “people person.”

“If that’s the case, then get help from someone who is considered a ‘people person,’” he says. “That individual is much more likely to understand what the front of the house needs than someone who excels on the operations side.”

If the restaurant features both a back-of-the-house and front-of-the-house leader, Galvin suggests ownership clearly define responsibilities and help each leader understand their partner’s value. The earlier this is
accomplished, the better, says Galvin, who likes to clarify roles during the interview process when candidates are most open to a different arrangement. This helps to minimize conflict and battles for authority.

“The secret is to get these two people to respect that their counterpart is the yin to their yang,” Galvin says.

When that is accomplished, the restaurant becomes an efficient, customer-focused operation that positions itself for success. Lacking that synergy, however, customers could flee.

“People want to go to places where they’re known, taken care of and trust they’ll get reliable food and service,” LaMotta says.