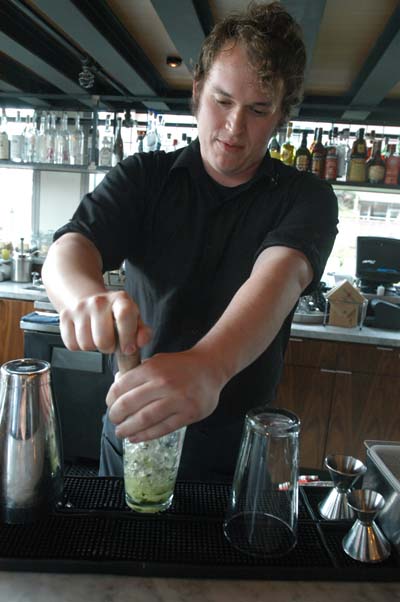 Incorporating the sell of alcohol into a pizzeria operation comes with obstacles, but the rewards may be too big to ignore its revenue potential.

Darryl Meadows, co-owner of Manhattan Pie Company in Georgetown, Texas, sought to add a bar long before it become a reality in May 2012. But, Texas had rules against bars being a certain distance from schools, Meadows says. The limitation was one of the determining factors in relocating the pizzeria. “We wanted more of a dine-in atmosphere,” he says. “(Adding liquor would) help us grow.”

Mike Hickerson, partner at LM Consultants in Thousand Oaks, California, says, before you make any plans, you should consult with city and neighborhood municipalities, as well as your
local Alcoholic Beverage Control. You may discover roadblocks that will stop your project in its tracks.

Liquor licenses requirements vary from state to state and even city to city. In some instances, there can even be waiting lists for licenses.

The agencies set the requirements for licensing, fees, type of liquor sold, hours that alcohol can be sold and specifications for alcohol sales.

License fees can range from $50 to several thousands of dollars and some require yearly renewal fees.

When executed effectively, adding a bar can be a huge sales booster of even 20 to 30 percent, Hickerson says. But, upfront costs — liquor license, equipment and remodeling a current facility — can break the budget.

Outline your bar project. Know what kind of bar you want. Some bars act as waiting areas at the front of the store, while others are isolated away from the main dining areas to provide a more
intimate bar atmosphere, Hickerson says. Some bar areas become centerpieces in the middle of the restaurant. Have answers to questions like: will you sell beer or wine or liquor or a combination? What impact will a bar have on the main dining area and your core customer base?

Meadows went for a small bar with only eight stools. Manhattan Pie Company’s build-out of its bar in the pizzeria’s new location cost nearly $12,000. He says they had to start from square one, buying everything needed to operate the bar — from mug and wine chillers, glasses and dish-washing station to furniture and keg coolers and dispensers. Darryl says they were able to save some by purchasing used equipment.

Consider big-ticket items in bar construction, like adding or moving plumbing and electrical. They can eat up a large portion of your expansion budget.

The pizzeria now sells beer and wine with an emphasis on craft beer — eight craft or micro beers on tap. He opted against selling liquor to maintain a balance of being kid friendly and satisfying adult customers. Meadows views his beverage program as an extension of Manhattan’s dining experience.

The first month of opening the new location, Manhattan tripled the sales of its highest month ever.

Success hasn’t come easy for Meadows. “It’s a learning process,” he says. “We’ve put adjustments in place.” There was an education process to get a handle on
local brews, he says. He found his distributor to be helpful in beer selection. Sales reps coordinated tastings for Meadows and his staff and offered a lot of support, he added.
It can be challenging to predict which beer, wine and cocktails will drive sales. Specialty drinks have a high profit margin, Hickerson says.

Craft beer is huge. Today’s consumers are willing to pay for quality, Hickerson says, adding that most quality starts at $6.

Goodfellas Pizzeria, a three-unit operation based in Lexington, Kentucky, made professional bar management a top priority with the addition of a speakeasy-themed bar to its pizzeria in Covington, Kentucky in the summer of 2013.

Co-owner Eric Boggs says, “We wanted to find management that we were comfortable with — someone with personality, knowledge and management skills.”

While setting up the new bar, co-owers Boggs and Coats were very hands-on. Now, with a bar manager who they have a lot of confidence in, they are able to take a step back from the day-to-day operational duties.

Instead of incorporating the bar into the pizzeria, Boggs and Coats opted to renovate an upstairs space to accommodate the speakeasy. The bar, called The Wise Guy, has soft, low sofas and dim lighting. While the other two Goodfellas locations do not serve liquor, The Wise Guy features handcrafted cocktails, craft beer and 170 bourbons.

Introducing liquor into the pizza concept brought added operational concerns like security and beverage shrinkage. Boggs and Coats installed security cameras at each of its locations so they can watch staff with inventory and cash. Measurements become just as vital to liquor costs as they are to food costs. Jiggers or control top monitors will limit over pouring.

Alcohol accounts for 40 percent of the Covington locations sales and increased the unit’s sales by 40 to 50 percent, Boggs says.